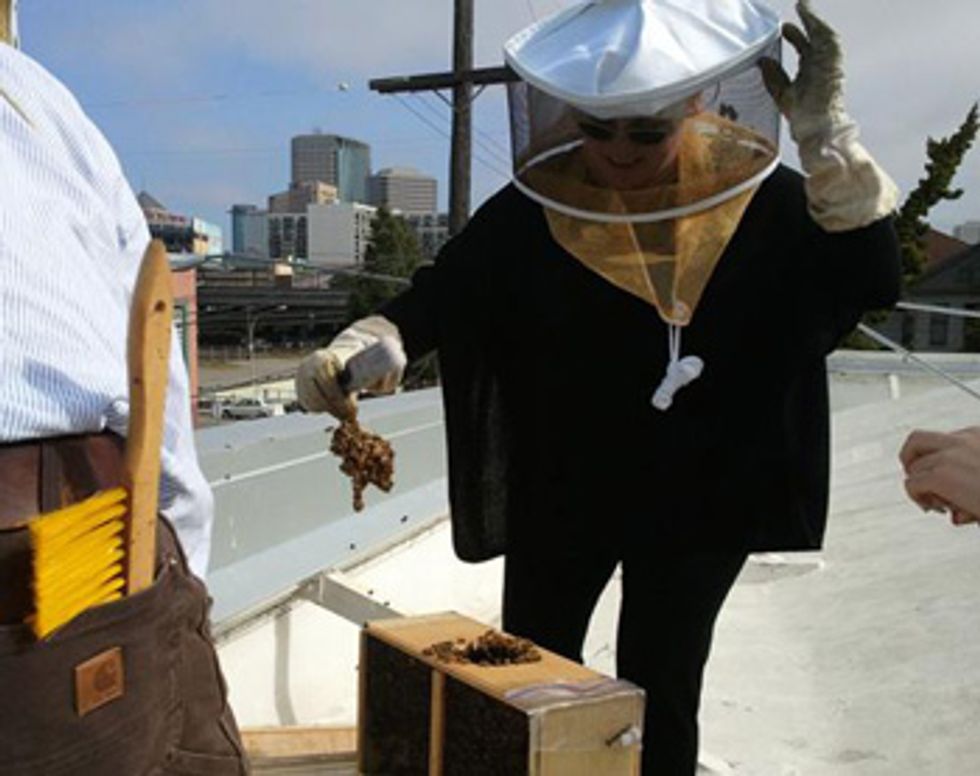 Yesterday I climbed a ladder up to the rooftop of Nopa restaurant to visit its brand new baby bee hives. Owner Jeff Hanak has been working with Terry Oxford and Brian Linke of Urban Bee SF to cultivate a two-hive community for three weeks now. Weather permitting, its honey will surface on the food and cocktail menus below the roof as soon as June. The idea of freshly harvested honey on a menu is romantic and all, but these urban hives are really all about the bees.

As Häagen-Dazsnation-wideHelp the Honey Bees campaign will tell you, bees are in grave danger of extinction. According to Oxford and Linke, pesticides and lack of agricultural diversity in the countryside are the main offenders. In contrast, San Francisco boasts relatively pesticide-free "perfectly neglected," diversified foliage—Eden, as far as bees are concerned. So Oxford and Linke are looking for like-minded restaurants to help them cultivate healthy colonies around town. Deliciously complex, partially crystallized San Francisco honey is the happy byproduct, salable enough to fund the cost of labor and maintenance.

So who else is hiding a treasure trove of bees around town?Bi-Rite Market was one of the first food-related businesses to bring in hives three years ago. They now have two hives maintained in concert with City Bees (one of SF's most highly regarded urban bee colony cultivators since 1998). Bi-Rite sells its honey exclusively at its 18th Street location. Marshall's Farm—who's had a large bee community at the CIA Greystone for 15 years now—put four hives in at the Fairmont Hotel about 11 months ago. Owner Helene Marshall—also a master with bee puns, just listen to the Marshall's Farms voice mail recording—says they're basically right on top of the Tonga Room and you can look down on them from the right vantage in the Farimont's lobby. Just ask the concierge for help. Marshall's Farm started selling honey to nice restaurants nine years ago. The now-defunct Postrio was their first account. Now they maintain about 80 different bee communities across the Bay Area, including six beloved hives for Thomas Keller at The French Laundry in Yountville.

Here in San Francisco, Flour + Wateris putting in hives of its own on May 14th and hosting a bee-centric art exhibit to go along with it. After the Laurel Court, Quinceand Cotogna chef-owner Michael Tusk was next to the restaurants-with-hives game with six rooftop hives. Here's the funny story of how he got started. Mission Beach Cafe now has four, Farm:Table has two and Blue Bottlehad three installed a few weeks ago at its headquarters in Oakland. "We look for like-minded businesses to partner with," says Oxford. "We're so lucky to have such, amazing, ethically minded restaurateurs around here."

Oxford is now hard at work designing labels for her first retail batch of honey coming to market soon. In the meantime look for Urban Bee's very complex, lavender- and anise-laced product at Quince and Cotogna, a more floral taste at Nopa, and a light, golden yellow, flowery one at Farm:Table. You see, just like wine, bee byproducts have terrior; so honey cultivated in the Castro will taste quite different from Nob Hill's nectar. And it's still too soon to tell how the honey at Mission Beach Cafe and Nopa will taste, but Oxford says their 15,000 starter bees are very hard working.  So what does this mean for the honey? "It'll probably be a little more on the floral side."