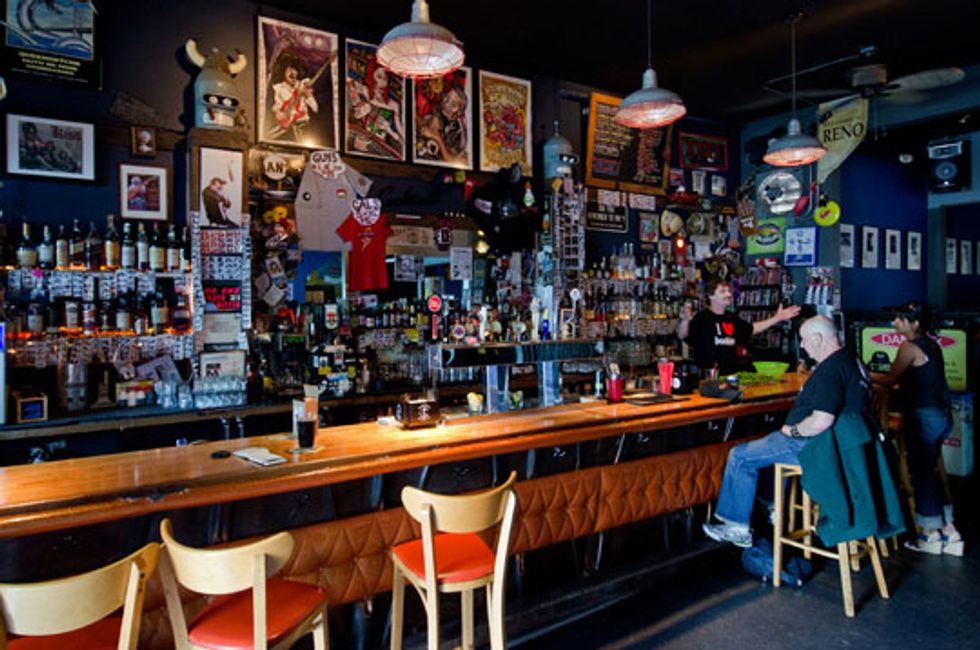 Twenty years from now, when your kids are old enough to know better but young enough to not give a fuck, they’ll be searching for places like Bender’s. Places where the religion is loud rock and roll, the sacrament is stiff drinks, and the scripture is graffiti tagged on a bathroom stall. Your kids will tell you about places like this, thinking that they are so hip and so in-the-know, thinking that their parents are square and would tremble at the thought of such places, and you’ll smile to yourself thinking about all the drunk weird nights you spent at Bender’s.

I’ve been there at Bender’s, nestled in elbow to elbow with bike messengers and janitors, with bloggers and graffiti artists; there for Jello wrestling and punk shows, for free Sunday barbecue and late-night karaoke. And so have you…or at least, you should be. Bender’s is where you go when you’ve got nothing to do and where you go to make shit happen.

In 2003, Johnny Davis and Co. opened up their dream bar only to see it gutted by a some punk ass arsonist three years later. Despite losing a lifetime of collected art and ephemera in the blaze, they were undeterred and reopened an even badder Bender’s 18 months later. Rotating art shows line the back walls, while the place pays homage to the Mission that was by displaying the signs of neighborhood business that have since closed up. Above the bar sits a beautiful painting of Johnny Cash (the patron saint of whiskey and regret), looking pensive and above him is the head of the bar’s namesake, Bender, the alcoholic robot from Futurama.

But this is not an art bar–fuck no–this is a dive bar. You come to Bender’s to shoot pool and to shoot the shit, to blow off steam and make out with a stranger, to eat late-night fried food, and sit around a table big enough to hold all the friends you’ve been meaning to catch up with for so damn long. And you come to get drunk; Tequila Terror Tuesday is just what it sounds like and Whiskey Wednesday is enough to undo just about anyone.

One of my favorite things about Bender’s is that it has, over time, unwittingly become a writer’s bar. On any given night you can see contributors from Mission Mission or Uptown Almanac or SFist chopping it up with each other. On multiple occasions it has even played host to what can only be called a SF writers convention; scores of The City’s snarkiest scribes come together to bond over cheap whiskey and the poor decision each made to become a writer.

Bender’s may not be the place you bring someone on a first date, but it may be the place you meet the person you’re going to marry. And years from now, when the two of you have kids and they are just discovering the wonders of those spots where art and booze and rock n roll and fuckery collide, just remember to tell them not to be intimidated by the bartenders. They’re far sweeter than they look.