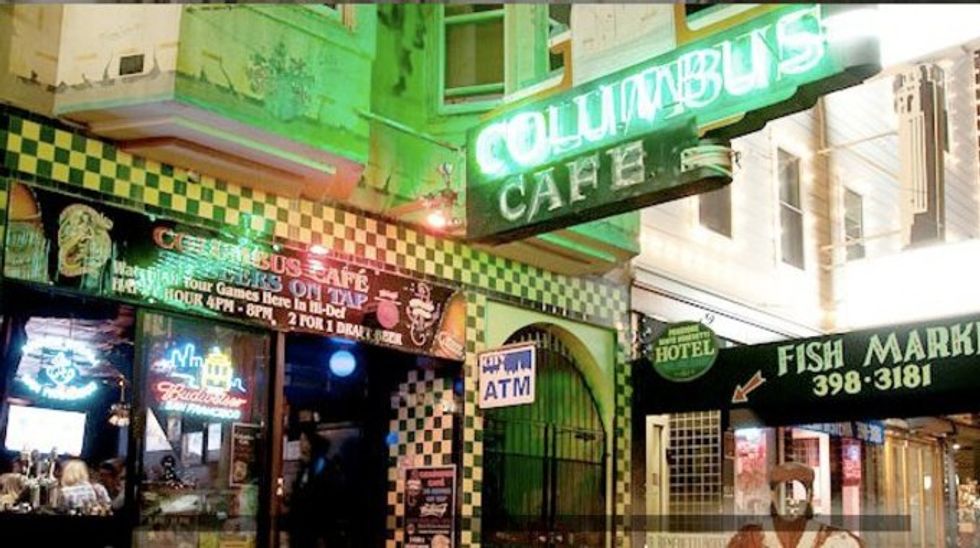 The first time I went to Columbus Café was with a con artist named Nelson. Well, at least that’s what he said his name was. I guess I’ll never really know his real name, not that it matters. It was also around this same time that I became Broke-Ass Stuart. It was the early 2000’s, I was 22 and working at Z. Cioccolato, a candy store down the street and around the corner from Columbus Café. It was here that I conceived the idea for the first Broke-Ass Stuart’s Guide to Living Cheaply in San Francisco zine, the little 30 page pamphlet that launched my life in such a remarkably strange direction. Nelson was my manager at the candy store, and one night after rotating the taffy, wrapping up the fudge, counting the register, sweeping the floor, and locking up, we went to Columbus Café.

Alfonso came with us. He and Nelson were co-assistant managers or some shit like that, and on the walk over he told me, “Yeah, it’s been awhile since we went to Columbus Café. A few months back Nelson and I were about to get in a fight with some douchebags when all of a sudden he reached down and pulled a gun out of his boot and started waving it around. The place went crazy and we ran out of there. I haven’t been back since. He’s a good guy though, he just gets a little crazy when he drinks.” I soon found out that Alfonso also got a little crazy when he drank; they’d both been in the military and it seemed every third time I went out drinking with the two of them there was a point in the night were a fight almost happened. Luckily, Nelson had stopped carrying his gun by the time I started working at the candy store.

Walking in to Columbus Café that first time, I realized that my relationship with it would be a lot like my relationship with Nelson and Alfonso. It would be a lot of fun, but there would also always be the possibility of things very quickly getting out of hand. That’s just how Columbus Café was, and still is really. The bartenders have incredibly heavy hands and the drinks are cheap, so drunkenness comes on fast and hard. Plus they have the best happy hour in the city: for every drink you buy they give you a token so you can redeem a free drink next time. The tokens don’t expire. Back then you could redeem those tokens at any hour, whereas now you can only redeem them during happy hour. Either that or the bartenders just liked us since we spent so much time there. Bars are a lot like people in the sense that, sometimes you can understand everything about them from the first second you meet. I could tell I was gonna love the Columbus Café.

First opened in 1936 to serve the many longshoremen that were in San Francisco at the time, Columbus Café has always been a working class bar with a devoted clientele. While in recent years San Francisco has greatly shifted from blue collar towards…um google collar (have they invented that yet?), Columbus Café still manages to attract people that spread the entire range of the socioeconomic spectrum. I’ve sat at that bar under the neon beers signs, sports gear, and nautical memorabilia tipping back pints with everyone from Hell’s Angels to tourists and from plumbers to whatever you call those slick fucks who work in finance. There’s usually a few woooo girls chirping out their mating call by the jukebox while someone is getting taken to town on the pool table. Columbus Café can be everything to everyone, so long as you like bars that are divey, dark, and don’t take shit from anyone.

One day, a few months after I started working at Z. Cioccolato, Nelson completely disappeared and when he did, he took a lot of people’s money with him.  It wasn’t until then that any of us realized everything he said was total bullshit. His whole background, all his stories, and even his name. Apparently he’d stolen the identity of the real Nelson from a guy he bunked with in the military (I guess at least that part was true). Besides making off with money from the shop, he’d also “borrowed” money from pretty much everyone he knew besides myself; I didn’t have any to lend him. I never saw Nelson again, and a little while later I moved on from slinging candy and became at waiter at Pasta Pomodoro down the street. While I’ll never know who Nelson really was I’m eternally thankful that he turned me on to Columbus Café. Well, that and the fact that I never let him borrow any money.