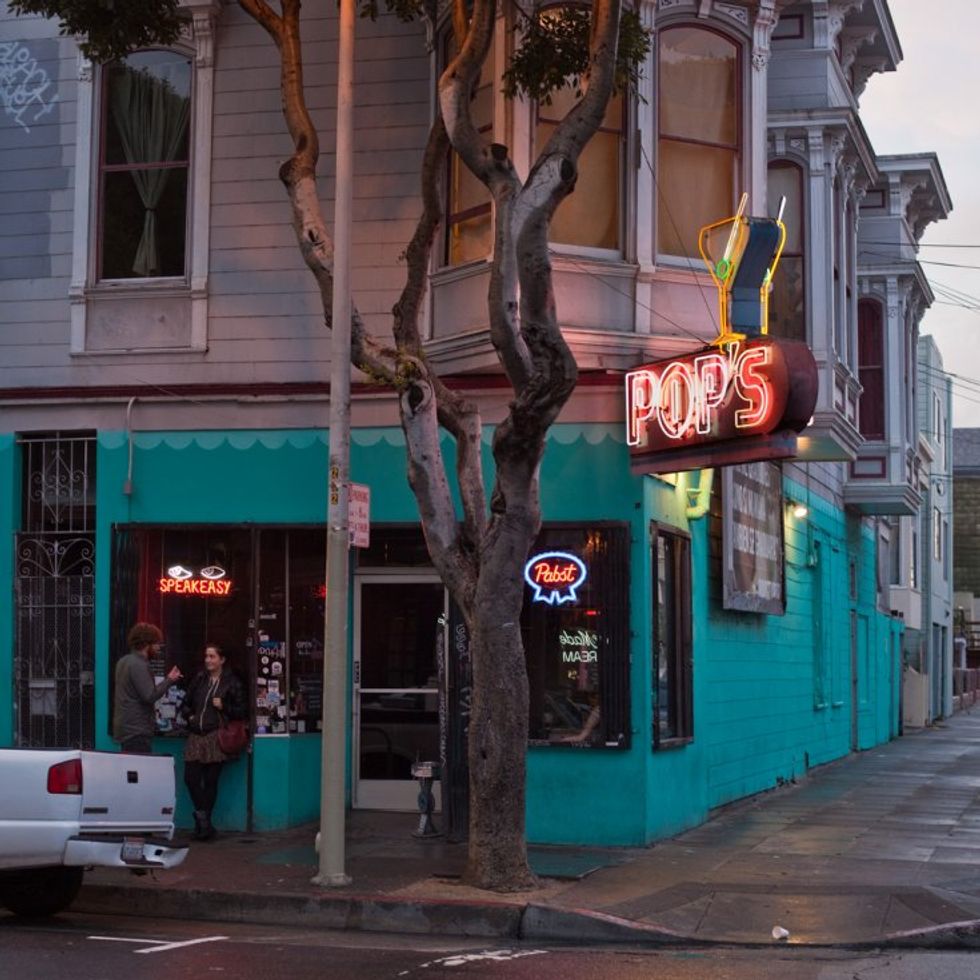 “I know, let’s go to Pop’s!” Jules said as we walked down Valencia trying to decide which shitty bar to spend our measly incomes in.

This was probably 2004 or 2005 and up until that point none of us, other than Jules, had heard of Pop’s. “It’s really divey and really cheap and they kinda don’t give a fuck about anything.”  She was onto something and we all knew it, so we trekked down 24th St., past the panadarias, and the jewelry shops, and the storefront churches, and the Mexican juke joints that we were all secretly terrified of drinking in.

At the time almost the entirety of 24th street between Mission and Potrero, was comprised of Latino owned and operated businesses, and walking down the length of that corridor, there was no doubt that we were in La Mission. And we loved it; we loved that neighborhood, their neighborhood, which was also our new neighborhood, and we loved the feeling that there was something going on, cross culturally, that all of us were part of. At the time we were either too young, or too naïve, or maybe it just wasn’t overly noticeable yet, but we didn’t realize we were the harbingers of the kind of change that would so rapidly alter the Mission.

The news broke yesterday that Pop’s is being sold. There’s no official word yet on who is buying it or what they plan on doing with it, but the news is out there, for whatever that’s worth. That night nearly a decade ago, when we first entered Pop’s was as it is now, a grimy dive with cheap-as-fuck drinks serving a grimy and cheap-as-fuck clientele. It was perfect. Bike messengers, tattoo artists, skaters, graff writers, no-goodniks, and drunks of all stripes sat at the bar drinking, talking shit and trying to get laid, just like most bars in the world. The uniform was black clothes, tattoos, and messy hair; the drinks of choice were cheap whiskey and PBR. Hipster wasn’t a terribly dirty word yet, not that it mattered because nobody gave a fuck about that kind of thing anyways. Or so it seemed. Pop’s has always been full of two kinds of people, the ones who actually don’t give a fuck, and the ones who just want to seem like they don’t. The more you drink the harder it is to tell the two apart.

After drinking for awhile my girlfriend at the time, Tia, and I squeezed into the photo booth apparently so we could have visual proof of our drunkenness. Inside she found a wallet with an immense amount of cash, something like $800 or $1,000. We looked at the driver’s license and luckily found the guy was still in the bar so we were happy to give him his wallet back with all the money in it. “Thanks so much, ” he sighed with the kind of relief one gets from finding out they just unknowingly dodged tragedy, “that’s for all my rent and bills for the month.” And then he gratefully bought us each a drink.

Pop’s is like that; it’s full of people that may be rough around the edges, and if you’ve been in the Mission long enough, chances are you’re gonna run into someone there you don’t like or who doesn’t like you. But at it’s heart, amongst the tags and the grime, and the dive bar smell, is a community of people who, when they find your richly laden wallet, give it back to you, fully intact. They do so because they hope you’d do the same for them, and because, when they belly up to the bar, they know they are sitting next to someone who also loves this neighborhood, one which they are struggling desperately to stay in and one they unwittingly helped change.

So here’s to Pop’s and its current owners Malia and Harmony. Here’s to cheap drinks and dive bars and poor decision-making. Here’s to the exuberance of youth and the nostalgia of hindsight. Here’s to the Mission I moved into 10 years ago and the one I still begrudingly love today. And finally, here’s to whoever is buying Pop’s. Please don’t fuck it up.