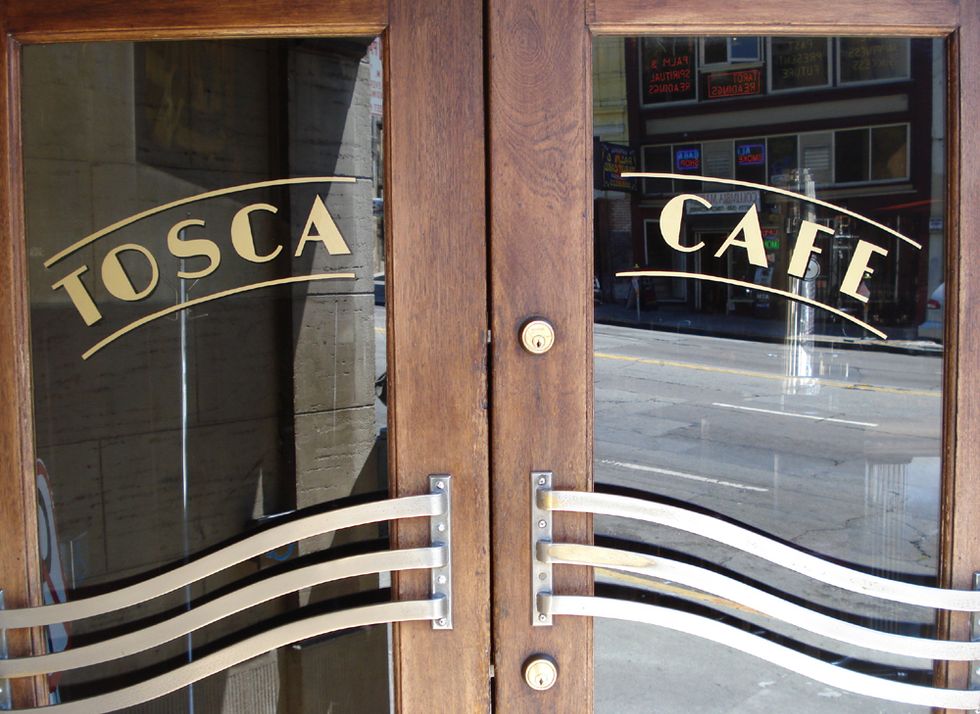 Ever since I heard that Tosca was served an eviction notice, I’ve been thinking a lot about a few lines in “Gobstopper (Remix)”–a track from Richie Cunning’sLate Night Special mixtape that goes:

It’s kinda sad when I’m in my city walking around/and all the places I grew up in they knocking them down/So they can build a new scraper with a million dollar sky view/and fill it with people who don’t love the city like I do.

Those lines really resonate with me, and should for pretty much anyone who’s spent a good amount of time loving and living in San Francisco. I didn’t grow up in SF like Richie did, but I’ve been here for a decade and have lived most of my adult life in this city. There’s been a lot of battles recently to save local institutions, some of which the good guys won (The Tonga Room) and some of which were lost to greedy landlords who could give a damn if San Francisco just became one giant mayonnaise mall (The Gold Dust Lounge).  Sometimes it seems like they’re trying to sell the San Francisco out from under San Francisco.


Combined with Spec’s and Vesuvio, Tosca is part of what I call the Holy Trinity of SF bars. They are a glimpse into the San Francisco that was; they’re a bit of the magic that reminds us of why San Francisco is so special. I don’t recall when I first visited Tosca, but I’ve been going there for at least a decade. Walking in, it’s hard not to be impressed by the length of the bar, the ancient paintings on the walls, the opera music swimming from the jukebox, or the giant vintage espresso machine that looks like it belongs on some kind of steam powered fictional airship. If it’s your first time in Tosca, you ask the bowtie-wearing bartender about the chocolatey drinks lined up on the counter and find out that they’re House Cappuccinos, made of hot cocoa and brandy. And you realize what people who’ve been visiting Tosca for the past 92 years already know, there’s almost nothing better to fight off the cold San Francisco fog than one of those Cappuccinos.

Tosca also has a devoted clientele of famous people to go along with its famous drink. Both Francis Ford Coppola and Sean Penn are known to frequent Tosca’s exclusive backroom, it was supposedly a favorite drinking spot of Hunter S. Thompson, and just a few years ago, Pulitzer Prize-winning poet Gary Snyder had book release/reading there. Hell, I even took a piss next to Baron Davis once in men’s room.

But having famous patrons doesn’t really matter. What matters is this: San Francisco needs Tosca more than Tosca needs San Francisco. In a time where San Francisco was just declared the most expensive city in the US, and The City’s artists and working class people are being quickly replaced by boy faced millionaires who care more about reaching their IPO than creating A-R-T, places like Tosca allow us to romanticize this beautiful city. They allow us to remember that this city was built on gold dust and denim, union organizers and poets. They allow us to remember that, for much of its history, San Francisco has been a place to fit in if you didn’t fit in anywhere else. What’s important about Tosca is that its sheer existence reminds us that San Francisco is not like everywhere else.

In the article I read about Tosca’s eviction it mentions that the landlord, strip club magnate Roger Forbes, is trying to work out a deal to keep Tosca there and not replace it with a tittie bar. I hope for the sake of San Francisco, that it’s true and that the good guys come out on top. If not, maybe we can petition Francis Ford Coppola or Sean Penn to buy it.