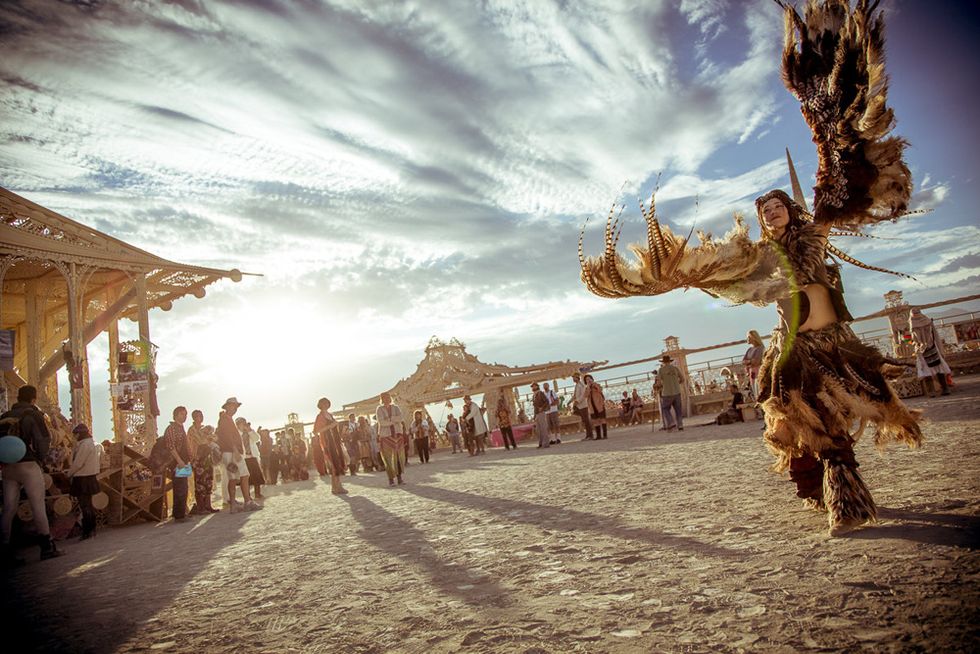 This Week in Theatres: The Trouble with Burning Man and Six More

One review and six previews of this weekend's upcoming flicks.

Much like the festival itself, there are plenty of complications with Spark: A Burning Man Story–one would expect no less from a documentary on such a contended subject. Like many recent docs, it can come off a bit of an informercial, even as it covers the more contested moments of Burning Man's recent years, 2012's ticketing debacle, and the ongoing fear that Burning Man's free-spirited origins have been co-opted by a tech combine motivated by greed. To its credit, it's a solidly composed first feature blessed with a certain guilelessness–the critical viewer can see where spin is being applied, but it's never laid on too thick, expect perhaps in the music department.

Rather than join the Burning Man pile-on that's currently taking place online (here and here) or retread the questions posed by Steve T. Jones in his excellent SFBG article on Spark's SF debut at DocFest, we decided to take some time out to talk to the film's director, first time filmmaker and longtime burner Steve Brown and the film's producer Jessie Deeter (Who Killed the Electric Car), about their thoughts on the playa, making movies, and the future of the Big Burn itself.

7x7: Was this your first burn?

Jessie: It was my first, he's an old timer.

Steve: I'm a newbie compared to the old timers, but I started going in 2006.

For people that have never been to Burning Man, should they watch this movie?

Steve: They should absolutely watch this movie. One of the challenges for everybody coming back from Burning Man is that they come back and they try to explain it to their friends until everybody's sick of hearing about it, and they still have no way of communicating what it is. You see the pictures, you see the Youtube video, and it looks like a party. I think the film is a great way to share a little bit of the real depth of the experience.

You were lucky enough to get involved right at the moment of the ticketing crisis; what did that moment mean to the film?

Jessie: We thought that ticket thing could actually bring Burning Man down at one point. But what it did for them, and for us, was really shine a light on what their core principles were. What is important to us? That's why we had that question about curation that in the normal default world wouldn't be an issue. If you have a scarcity you just simply raise the prices, but that goes against their very core principles. And the fact that they're now having to consider who their community is means they've had to evolve and grow up, and that, we thought, was the value of the ticket crisis.

Is this the film you set out to make?

Steve: It evolved because you can't predict everything that's going to happen–you can't do that in a documentary. But we had a theory that they were at a pivotal, transformative moment in their history. When I first got to know the board of Burning Man the things they were talking about were legacy and succession. They've been doing this for two decades. They're also talking about growing and engaging in the world and making a difference in the world. When you go out of this enclave that's in the desert and into the world, you have to engage with the world, and that leads to all kinds of challenges and new things you have to deal with. They were right at that moment.

A friend of mine was saying that she thinks that Burning Man is SF's biggest export, what do you think about its expansion in the last few years?

Steve: It's really interesting because it's turned into a cultural phenomenon that is very far reaching and communities all around the world inspired by Burning Man are replicating the Burning Man idea with collaborative art events. It kind of grew out of the San Francisco art world and more recently met the Maker world of Silicon Valley, and so you have this sort of fusion, and the result is quite a phenomenon.

The Burning Man organization right now is very interested in that, exporting Burning Man to the world. There's a Burning Man global leadership conference in San Francisco where people who are leading those events from all around the world get together to learn about the logistics–how do you run the event, how do you deal with security–all those issues. It was a very global group of around 200 people.

There's a line in the film: "The last thing people want is a bunch of venture capitalists here!"

Steve: The founders of Google have been going out there since the very early days. Now you have some of those entrepreneurs becoming huge success stories, and that kind of changes the idea of it.

The venture capitalists came in later partly to build up their street cred with entrepreneurs--it was the sign of a cooler venture capitalist. But it is sort of a big challenge to the culture. As Burning Man is meeting the world, the world is meeting Burning Man, and the value of the finance world is very different than that values of Burning Man. But that happens in Silicon Valley too–you have entrepreneurs who are trying to change the world, and you have the finance people that back them. The tension in the SF Bay Area in the tech world is also present at Burning Man.

Where do you see Burning Man in 10 years?

Steve: I don't know what will happen to the mothership out in Black Rock City, but we played the film in Washington DC a couple months ago at a sold out screening, and somebody came up to me and said: "This is my third burn, but I haven't been to the playa yet." There's an event happening on the east coast that she'd been going to where they collaborate on art, and spend a week together–this idea that you can be in a community and you can have this freedom of a set of values that aren't the default values, is really great. I see a lot of that happening around the world.

Jessie: I was joking with [Burning Man co-founder] Michael Mikel and on the playa and there were all these people and I looked at him and said "I think maybe it's gotten too big now, how many people do you think can come?" Without missing a beat he said "I think two million."

Far Out Isn't Far Enough - "I have the full respect of a piece of white paper, which I then shall rape." Political/Erotic/Children's book illustrator Tomi Ungerer proves a riveting subject as he in turns plays historian, psychoanalyst, and master of ceremonies to his own astounding history. Rotten Tomatoes: 94%. Opera Plaza.

Adore - What could have been a saucy Lifetime drama--two middle-aged women agree to sleep with each other's sons--gets an oddly solemn treatment in this convincingly-acted flick starring Robin Wright and Naomi Watts. Rotten Tomatoes: 44%. Sundance Kabuki.

Passion & Femme Fatale - Brian DePalma's more schlocky recent works are on display in this Castro double feature. Expect the worst, bring a beer, and you shall be rewarded. Castro, Thursday only.

Alternative Visions - PFA began their annual outre animation program with a pair of "comedic horror musical documentary animations" last week and continues into November with screenings of shorts and features including the astounding Holy Motors. PFA Berkeley, Through November 20th.