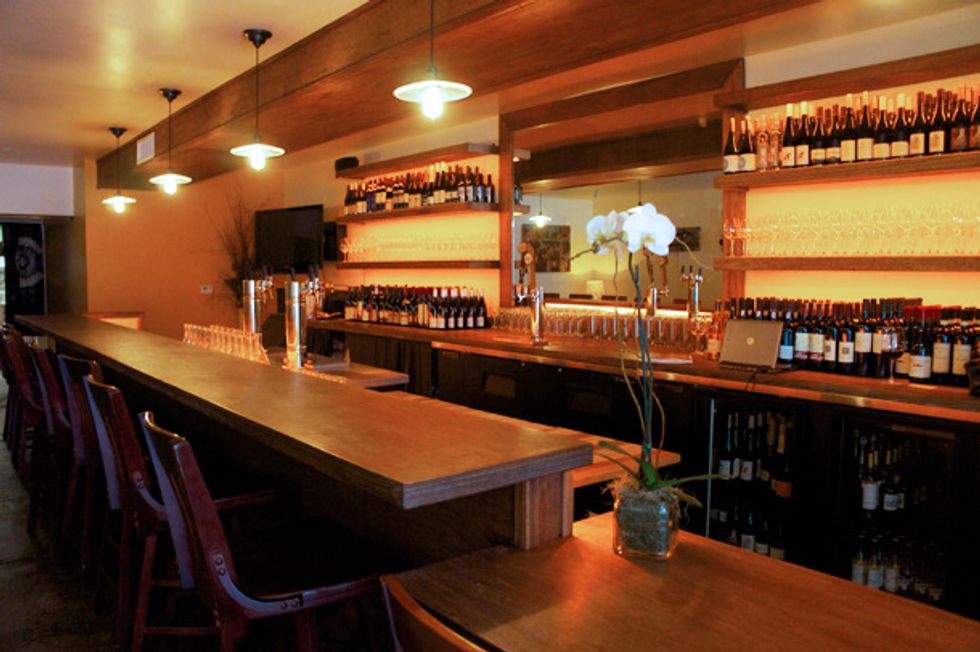 Wine bars. San Francisco actually boasts the first one in the country, London Wine Bar, which opened in the Financial District in the seventies (and closed in 2008), but the trend got to be a bit overwhelming in the last decade or so. Nevertheless, we have a lot of cool and impressive wine spots here–St. Vincent, Hotel Biron, and The Hidden Vine to name a few–and three recently opened new ones, which promise to free you from your Sauvignon Blanc and Zinfandel ruts.

Et Al.,2255 Polk Street at Green
The new venture from Biondivino owner Ceri Smith boasts an impressive selection across multiple categories. But via a few recent trips to Georgia (the country), Smith has a unique and impressive array of Georgian wines, as well as ceramic piyala for drinking the wines in the most traditional fashion (Georgians, and Smith herself, insist that the ceramic vessel changes the flavor and experience of the wine ever so slightly). This is a good place to go for an introduction to orange wine (a rustic type of skin-contact white wine that originated thousands of years ago in Georgia), as well great Rieslings, Champagnes, and interesting European reds. Enjoy your vino with delicious bites from Boulette's Larder, like freshly prepared and perfectly seasoned steak tartare.

Tank 18, 1345 Howard Street near 10th
SoMA has a couple of new urban wineries (see also Bluxome Street), and Tank 18 is the newest. It's a co-venture from first-time winemakers Patrick MacCartee and Cheryln Chin, and it's in a huge, newly remodeled warehouse space that has a side entrance at 18 Dore–hence the name. MacCartee says the impressive space, which looks especially dramatic thanks to Edison bulbs at night, is a reflection of its owners: "Big, loud, and full of alcohol." As a tasting room, they're only open Thursday to Sunday, from 3 to 10 pm (ish), with occasional appearances by food trucks. The space is available to host events as well. We can say that they're already pouring a more-than-passable Tempranillo from El Dorado, and also on the menu are a Russian River Chardonnay, a California Pinot Noir, a and a Cabernet Sauvignon. You can buy a flight of all of them for $15, or order them by the glass or bottle.

Wine Kitchen, 507 Divisadero at Fell
The ongoing gentrification of Divisadero has brought this brand new wine bar, opened just this month, with a sophisticated bites menu by co-chefs Greg Faucette and Jason Limburg. Faucette and Limburg have fine dining backgrounds at places like Spruce, Commonwealth, and Bar Tartine, and in opening this casual spot, they wanted to up the ante when it comes to typical wine bar food. You can expect dishes like fried gnocchi with horseradish and short ribs, and boquerones on toast with black garlic aioli to go with an international selection of 50 wines by the glass. We recommend things like the 2011 Chenin Blanc from Champalou ($11), and a totally unique, non-vintage red from Corsica called Rouge Frais Imperial, by Domaine Abbatucci ($13).