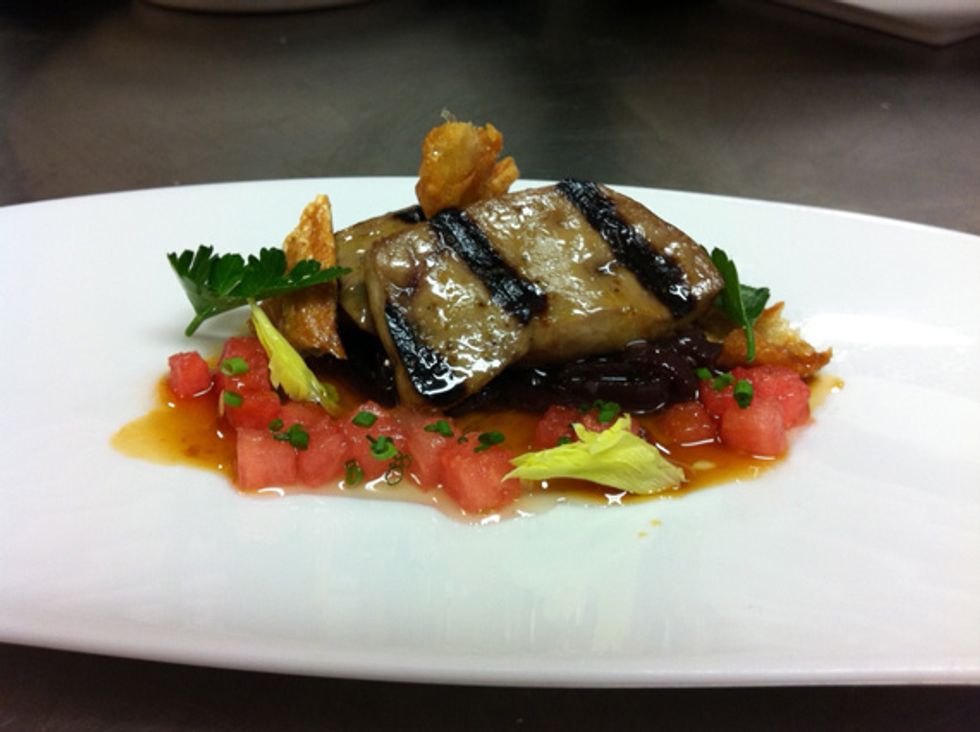 The first time I walked off the street into Japantown's Bushi-tei, it was just to take a closer look at the majestic, live-edge communal table that almost fills up the entire street-level dining room. A glance upstairs revealed irregular, Hobbit-like slabs of wood lining the walls. Another look down popped with pairs of whittled wood spindles, serving as the most delicate of chopsticks on each table. I had to come back.

Owner Tak Matsuba later recounted the story of the wood in the restaurant. To create its aesthetic bones, he imported a large chunk of a 19th century Nagano prefecture home. The chopsticks are hand-carved Japanese mulberry twigs shipped in from the Gifu Prefecture. Matsuba's staff hand-washes them every day so as not to mar them. The result of all this painstaking effort has a transportive effect something like the scenes from Murakami's The Wind-Up Bird Chronicle: evocative, a little out there, and—at the risk of sounding swept away— it almost doesn't feel real.

Since it opened about six years ago, Bushi-tei has made a soft, yet lasting imprint on Japantown, thanks in no small part to the Michelin and Chronicle star-drawing menus of former chef Seiji Wakabayashi. He left a little under a year ago and now 33-year-old Jardiniere alum Michael Hung is leading the kitchen into a new era. Hung, who's also working on his Masters in Fine Arts at USF,  carries on the kitchen's meticulous, studied tradition of fusion cooking. (He's even brainy enough to pen the occasional blog piece for The San Francisco Chronicle.) But after five months in the kitchen at Bushi-tei, he's changed more than he's kept the same. The menu, which has always blended the influences of Asia, France and California, is more Japanese than ever before.

Hung makes his own silken tofu in house, with a hat tip to Traci des Jardins: it's injected with cream, almost transforming the savory mass into a free-form sort of panna cotta. Jardins' French influence also shows up in Hung's seared duck with peaches and turnips, a frequent player on Bushi-tei's a la carte menu. On my visit, the duck was rosy in the middle, seductively crisp outside, making luscious play with the ripe seasonal peach and turnip hunks surrounding it. As it just so happened, I'd eaten Traci's duck at Jardiniere the night before. This was just as good.

But you won't find Hung's hatch miso anywhere in Hayes Valley. The particular strain he uses to dress his housemade kishimen udon was aged for "three winters" in Okazaki, Japan. The sauce mixes with soybeans, garlic and ginger to create all the heady pleasure of a buttery roux. Then there's seared foie with caramelized onions and compressed watermelon, local crudo with seasonal accoutrement and, on my visit, a housemade mochi compilation for dessert. All the dishes don't necessarily captivate with quite the same magic as the tofu, udon and duck I tried, but the soft, efficient service helps round out any rough edges. Once you realize Matsuba has enlisted his son and daughter as servers, and the impeccably gracious, smiling woman at the host stand is his wife, the whole experience gains an extra layer of warmth.

Hung recently told me he's working on a new NY steak shabu shabu dish, using water stones to heat a three miso cooking broth, then reworking the same enriched liquid into a "proper" soup for the next course. "I've taken the inspiration from kaiseki-style dining as well as the [Alain] Ducasse-ian style of serving a thing with itself," he says. Do I need to say that I'll be back?