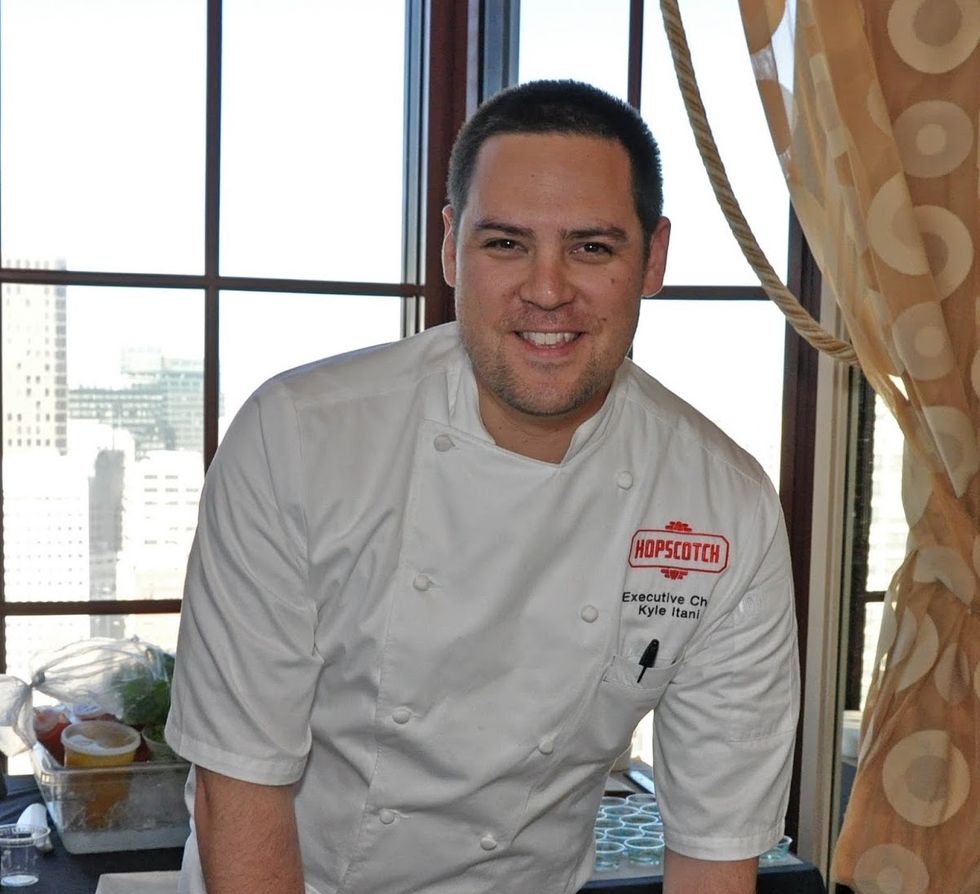 Hopscotch chef Kyle Itani is a fourth-generation Japanese American and Vacaville native whose resume includes education via the Food Network and the California Culinary Academy, time living in Sendai, Japan, and stints at Yoshi’s in Oakland and San Francisco as well as New York’s Meatball Shop. His unique background—and plenty of traditional Japanese technique—is on display on the Hopscotch menu, which, on the surface, appears as American as, well, the First Base Burger. And folks are eating it up: Itani and Hopscotch have built quite a following in the nearly two years they’ve been at it—much to Itani’s delight (and surprise). Here, we talk heartburn, little league, and why you should skip the fried chicken and order the pork chop instead.

Aww, I’m all sentimental. I remember this very distinctly… when I was younger, I was playing whatever comes before little league, after t-ball; my dad was the coach, so he was the pitcher. He hit me with the ball—in the hands, holding the bat—it hurt so bad! I’m like, miserable! It was wet, cold, my hand’s all beat up. Then we went to this sushi restaurant we always went to and I got miso soup, and it was the most comforting thing ever… I didn’t realize at the time, but as I got older I kept thinking back on that like, wow. I was kind of enamored that food could make you feel such strong emotions, very comforted, very secure and all this stuff. That’s the first time I thought about food in a different way than just sustenance.

Love that! So, next: you have a guest at home you want to impress; what’s the go-to meal?

It’s called ocha-zuke… It’s steamed white rice and I’d do a small piece of poached fish on top, a few pickled vegetables; then you make tea—ocha means tea—and pour it over the rice; the tea becomes the broth. It’s very humble, very traditional Japanese, but I think those components would blow someone away who’s never had that dish.

Sounds amazing. Turning to Hopscotch: if somebody could only eat here once, what should they order?

First, the Yonsei oyster; that’s one of the first things we put on the menu that really just ran away—people go crazy about it—one oyster, shucked, with salmon roe, uni and ponzu… Then, we always do a green salad; right now it’s shaved kohlrabi, chrysanthemum leaves and tamari-sesame dressing. For the main course, we’re super well-known for the fried chicken and the burger, but I would say you gotta go with the pork chop… Our brine, for the salt we use soy sauce, for sugar we use sweet sake, so it has all this rich umami flavor, which pork already has. For dessert, I mean, how can you go wrong with butterscotch pudding over freshly fried donuts?

You can’t. Okay, what do you think is the best dining experience in the Bay Area, other than here?

My fiancé and I went on a date recently, to Off The Grid at Fort Mason, did all the food truck stuff and, you know, maybe spent $25. After, we went to Gary Danko, sat at the bar and had the cheese course and a bottle of wine.

Genius. What’s the most outrageous thing that’s ever gone down here?

Sure. Next: You kill your sommelier and you’re on death row; what’s the final meal?

Ha! I don’t eat a lot of red meat, but I think a big, huge, fat porterhouse. Twenty-eight-day dry-aged, add foie butter, just get crazy. I never eat like that, but you wouldn’t worry about the heartburn or anything!

Exactly. One ingredient you couldn’t live without?

Dashi. It’s very clean but has a lot of smokiness from the fish.

Fill in the blank: people might be surprised to see me eating ___.

Nice. So my last question has to do with bacon: awesome or overrated?

Awesome. But we make our bacon from the start. Cure it, smoke it, do it all here, so it’s incredible.

So, back to most outrageous. Tell me.

Oh yeah. I mean, in almost two years since we opened… actually, the most outrageous thing is that we’re as popular as we are! I don’t know if that’s the answer you want, but to me that’s it, because we’re this tiny little restaurant on San Pablo Avenue in Oakland, and, like, who would ever come over here, how do people find us? Like [Friday], Valentine’s Day, it was like 130 covers, and I couldn’t believe it! I’m like, where did these people come from? Why? I mean, I know why, but I can’t believe it!

$18 million Atherton home has all the French estate vibes