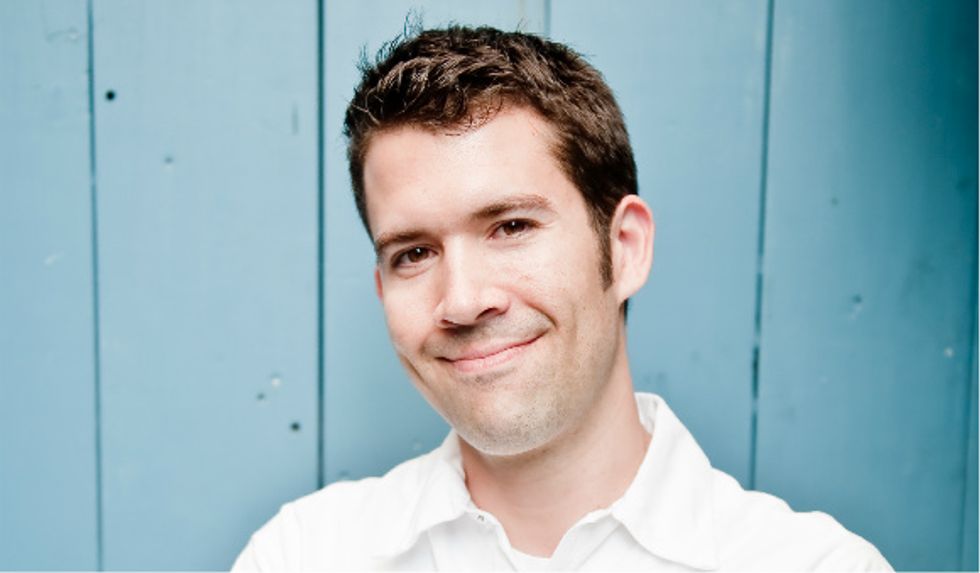 I chat with Chris Thompson, executive chef/salumaio at Chestnut Street’s award-winning (and always-hopping) A16, on his first full day back at work after being hit by a cab outside the restaurant three weeks ago. The Telluride-raised snowboarder/Spruce alum/salumi prodigy is still on crutches, in a cast, and—due to the lack of unoccupied limbs—carrying stuff around in a backpack. (“A laptop bag, every step you take it swings away and then hits you,” he says of his choice of… carry-wear. “I’m back to first grade again.”) But, even though he’s got three more weeks to go in the cast, he’s as charming and enthusiastic about food as ever.

A trip—an exchange program in high school with an international school in Graz, Austria. We went to this old farmhouse called Bauer Haus; it was the first exposure I ever had to a vertically-integrated property. There wasn’t a ‘farm-to-table concept’ because to call it that they would have looked at you like, duh! Everything was grown there. The balsamic vinegar was made from grapes they grew on the property to make wine. The goat cheese was made from goats they had on the property. Lettuces, herbs; everything served in that farmhouse was grown on that property; there was nothing else… Amazing and simple, but totally profound. That was the first experience where I was like, okay, maybe cooking is more than just a hobby or a high school job that I’m doing for money to buy new snowboard gear. It really resonated that it could be a career path, and left a long-lasting impression on me.

Pretty deep for high school! You have a guest at home you want to impress. What’s the go-to meal?

I really like doing stewed rabbit with my own fresh pasta: chickpea flour fettuccini with braised rabbit sugo. I’d finish it with a little Grana Padano for richness or Pecorino if the tomatoes were kinda flat and I wanted something a little more sharp… It’s fun because a lot of people don’t know how to break down a whole rabbit. It only takes about three hours to stew—roasting it, then stewing it in some sauce, then shredding it… Then with the pasta sheeter—I can just give them a demo, theh they can finish it for me! That’s something people really enjoy. If somebody’s never made fresh pasta before, the first time it’s like this look of astonishment and gratitude and satisfaction of like, yes! I’ve done this; I have made pasta!

Victory! If somebody could only eat here once, what should they order?

How big an appetite does this person have?

Oh, this person can eat.

Start with the salumi plate and burrata. Then Margherita pizza with bufala mozzarella, or if they’re lactose intolerant, the Marinara pizza. Then the squid ink tonnarelli, then our house butchered pork chop. For dessert, the chocolate budino. Or – no; the seasaonal crostata.

I was just thinking I don’t think I’ve ever made it to dessert with any appetite left...

It’s hard to save room when you’re getting crushed by carbs! Not to mention drinking amazing wine.

Truth. What do you think is the best dining experience to be had in the Bay Area, other than here?

Meadowwood. That’s the best dining experience I’ve had in my life. In the United States.

Most outrageous thing that’s ever gone down here?

Getting hit by a cab in front of the restaurant was pretty outrageous! I think we have to put that one down.

Ha! Done. You killed your sommelier and you’re on death row. Final meal?

[Whistles.] A bottle of Bordeaux, a baguette, and a chunk of Camembert cheese. I think that would be a sweet last taste before death.

Sounds good now. One ingredient you can’t live without?

Either salt or imported Italian olive oil from Puglia.

Fill in the blank: people might be surprised to see me eating ___.

As much gelato as I do. If you saw me, you wouldn’t be like, that guy eats gelato all the time. You know that saying, never trust a skinny chef? That’s me.

Nice for you. And finally. Bacon: Awesome or overrated?

Bacon?! Bacon is amazing. It’s overdone but it’s not overrated.