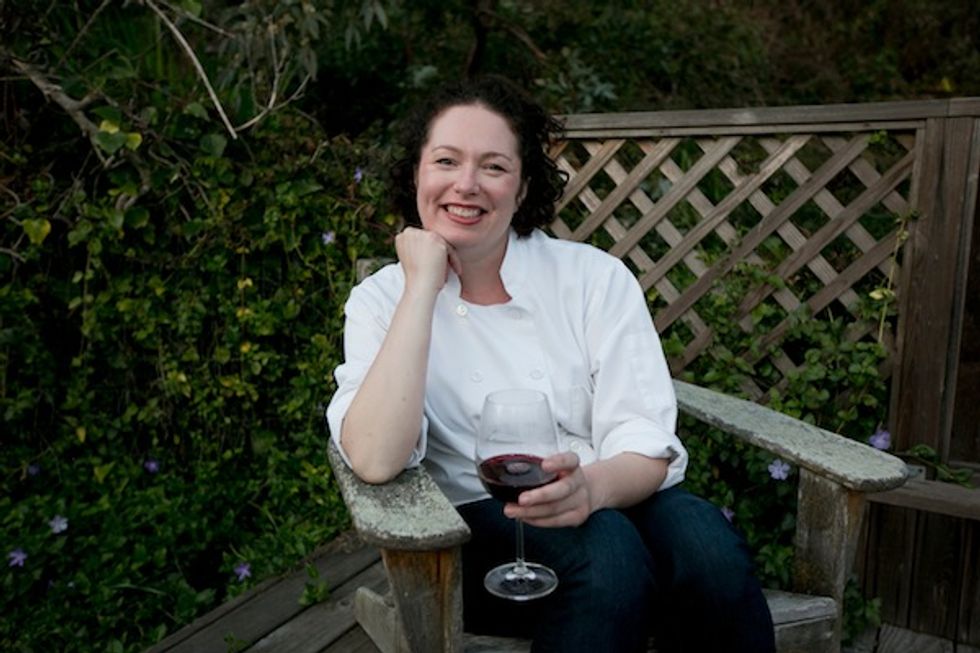 Uptown Oakland’s culinary scene just keeps getting better, and clearly the locals are hungry for it.

In fact, as Melissa Axelrod, co-owner and chef along with boyfriend William Johnson of newcomer Mockingbird, tells me, “We’re almost exactly two months in and have regulars already –it’s great!” And not surprising, when you consider the duo’s collective resume, which is littered with San Francisco institutions like Zuni, Delfina, RN74, and Spruce.

At Mockingbird, which sits right next to the New Parish, they’re taking all of that know-how and putting it to work in a way that’s thoroughly of the moment: the affordable, eclectic menu changes daily, featuring what’s fresh and local in sophisticated preparations that are rustic yet inventive, and their kitchen is run “by committee.” Functional democracy: just add pork fat?

Here, Axelrod and I talk oysters, PB&J, and boys who do, in fact, cry.

I should have studied. Also, catching and eating a fish from the Russian River with my grandfather and my mom when I was like three or four.

Did you catch it yourself?

I think I gave up and went swimming. I think my mom actually caught it, but I insisted –I ate the whole thing.

You have a guest at home that you want to impress. What is the go-to meal?

I used to work at Delfina, and that spaghetti with tomato sauce. It's totally simple but that’s actually the first thing that I cooked for my business partner and boyfriend William!

So it works! Now, I know you’re changing the menu all the time, but here’s the question: if somebody could only eat here once, what should they order? Is there something on there right now?

Oooh. That’s hard. I think the most must-eat dish—especially because we don’t have a lot of Asian influence on our menu—is the crispy pork torchon with a soft caramel and a kimchi mustard green salad. There are a lot of flavors going on there. And a lot of fat!

What’s your favorite dining experience in the Bay Area, other than here?

Gosh, my favorite place closed! It was a sushi place, they lost their lease, that would have to have been it—Hama-Ko. I grew up in Cole Valley so I’ve been going there since they opened, like 30 years. William and I decided to meet for sushi one night and he suggested that place and I’m like, oh yeah I know it! And it turned out he’d been there a lot as well, so.

Bummer. Have you found a replacement yet?

No! No place like walking distance or a little train jump or anything like that. I mean, we have but, you know, for like triple the amount of money.

So, I know you’re new, but what's the most outrageous thing that’s gone down here so far?

I don’t want to say having my iPad stolen, but that’s probably it; there’s been no crazy things happening in the dining room yet or the kitchen even.

What about the rest of your career, anything come to mind?

Oh, just working the line at restaurants, like you know, seeing guys cry on the line is probably –

That’s one I haven't heard before!

That’s funny. Moving on: let’s say you kill William and you find yourself on death row. Final meal?

Salt. This is like the most common answer, I’m sure.

I have to say San Francisco, but when I was in Philadelphia I loved all the sandwiches there.

There’s the peanut butter and jelly sandwich you have after a night of tasting great food.

Know a chef who's ready for their 15 Minutes? Tweet  @Shannon_BKelley