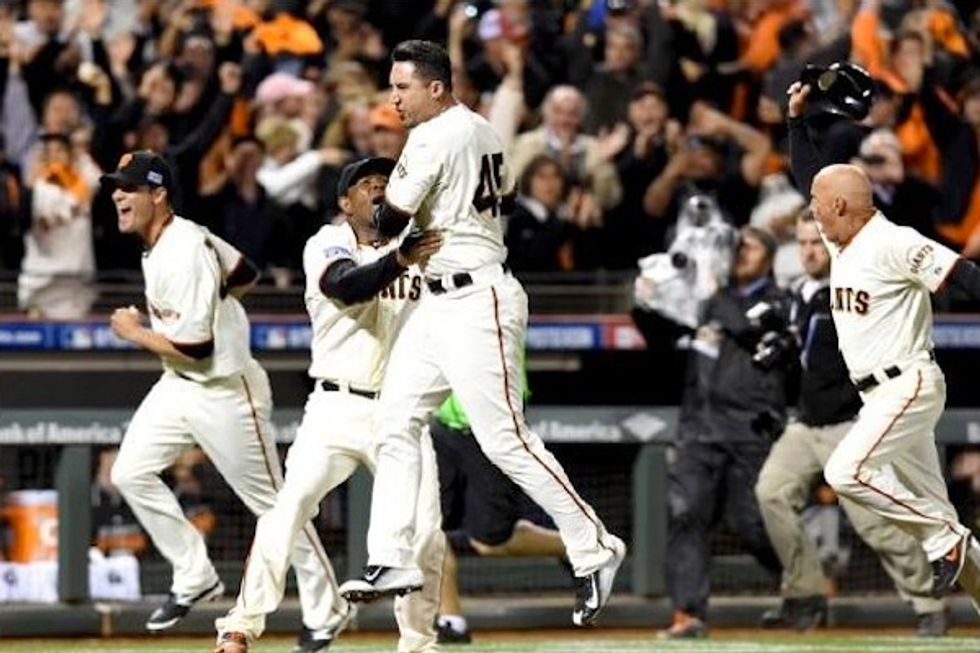 7 Places to Watch the World Series in SF

Let's take this one game at a time, folks. So, please, no mention of the D-word. Not just yet. In order to help you map out where you'll watch the Giants take on the Kansas City Royals this week, we've listed 7 of our favorite places in which to watch, cheer on, and wince at the World Series.

If you can't score a ticket to cheer on Los Gigantes inside the park, then check out Traci Des Jardins' wildly popular restaurant at AT&T Park. It's the next best thing to sitting along the third base line. Get there early as the queue gets long fast. Order the corn dogs and cubano.

Check out the World Series games on their patio, where seating is biergarten-style on picnic tables. A hardwood-smoked whole hog will be served for each game, as well as their regular BBQ menu (including their brisket, ribs, and the Best Damn Cheeseburger) and their selection of local beers on tap.

In addition to TVs, a heated patio, and free pool during happy hour, this Inner Sunset gem is for diehard fans only, please. Showing up in the postseason sporting a Posey jersey does not a Giants fan make. These people will sniff you out. You've been warned.

The Mad Dog in the Fog

This noted Castro gay sports bar packs them in. And how? In addition to a tasty menu (the fried chicken sandwich is particularly noteworthy) and hordes of cute gays and lesbians in sports garb, they have 16 flat screens showing the game. Be warned, there's a trough urinal that, at times, proves too much of an exposé.

This Irish pub in the heart of North Beach is the best way to experience the neighborhood during a game. Get there early and hunker down. The bartenders are especially nice. And if the Giants aren't your thing (!), go ahead and play a game of darts. Just be quiet while Pence is at bat.

Shhh. Intimate, no-frills, and heavy pours make this the best bar in San Francisco in which to watch any sporting event. But you didn't hear it from us. Regulars of Mr. Bing's are very protective, so mind your manners after downing your second Jack and rocks.