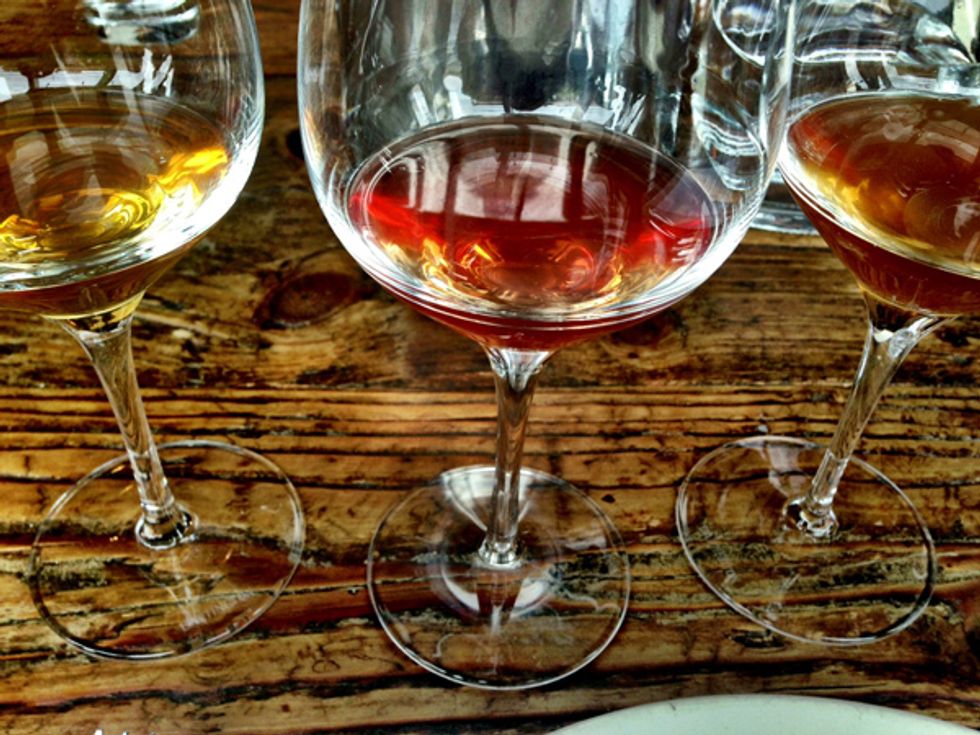 A Primer on Orange Wine, and Where in SF to Try Some

Wine drinkers fall into two categories: You've got the people who know exactly what they like and don't like, and tend to be finicky about anything that falls outside of their Trader Joe's/Chardonnay/Pinot comfort zone; and you've got the people who are always seeking out the odd and different, who are always the first to try new restaurants and tell you about some new booze they just tried. Orange wines, which are featured in the March issue of 7x7, are perfect for the latter type, the more adventuresome drinker, and one especially who leans toward sour beers and rustic, old-world food.

Orange wines are part of a trend, born most recently in Italy, toward a very ancient, natural style of winemaking, and because of this, they're not for everyone. Orange wines are, to be clear, not always orange, but can come in a range of hues from pale gold to deep amber, and this comes from fermenting white grapes with the skins left in the mix – they're the opposite, therefore, of rosés, which are pink wines made by stripping the skins off of red grapes. Many of them are allowed to oxidize during the winemaking process, giving them an odd tang that fans of refined whites might not appreciate. But they can be highly interesting, food-friendly, versatile wines with the complexity and structure (and occasional funkiness) of lighter red wines.

Orange wines remain trendy in 2013, especially among foodinistas, but most of you probably haven't even heard about them yet, despite plenty of coverage in the food media.

In the wine world, though, the discovery of this genre of wine happened in the U.S. around 2009, so critics like Jon Bonné in the Chronicle and Richard Betts in Forbes (who's also a sommelier and winemaker) are already kind of over it. Betts recently made the bold statement that Tecate is better than orange wine, and Bonné concurs that many of the more oxidized orange wines come from flawed winemaking. Though they might have cult appeal, he argues, they certainly shouldn't command some of the prices we're seeing now of $70 to $110 a bottle.

The food-friendliness of these wines shouldn't be underestimated. One local wine guru, David Lynch (sommelier and owner at St. Vincent), says he thinks the wines are "more intellectually/romantically appealing than actually pleasurable." But another respected wine pro, Shelley Lindgren (sommelier and co-owner of A16 and SPQR), says she has found orange wines that she can pair with almost any dish on her menus, saying "the growing number of natural wines of high quality that I can pour by the glass has offered proof of how beautiful natural wines can be with food." Another local wine expert, Ceri Smith of Biondivino wine shop and Et Al wine bar, is a huge fan of orange wines, particularly the more rustic styles from Georgia–where it's believed the craft of winemaking originated 8,000 years ago, and where at least one operating winery there today is 1,000 years old, and still making wine the same way.

Below, a starter kit of exemplary orange wines, and where to taste them.

A great introduction to the orange genre, and the first one we tried on the list at SPQR. The wine is made by nuns in Lazio, with the consultation of a well known winemaker, and it's a blend of skin-fermented Trebbiano, Malvasia, and Verdicchio grapes. It's floral, woody, acidic, interesting in its flavor profile and rusticity, but not overly sour or oxidized. Find it at A16, SPQR, Locanda, and elsewhere for $12 to $14 a glass.

This is a darker, funkier example from the "cradle of wine" in Georgia, made by a monastery founded in 1011 (1,002 years ago). At Et Al in Russian Hill it's served both by the glass and in traditional terra cotta bowls called piyala that somewhat alter the flavor and aromas of the wine. Available at Et Al, Biondivino, K&L Wine Merchant for $12 a glass or $24 a bottle.

2010 Mtsvane–Antadze Winery, Georgia
A somewhat lighter and more refined example of orange wine, using a different Georgian grape, and this was one of the favorites that we've tried, with some tea tannins and spice and plenty of apple and peach on the nose. Available at Et Al.

This wine is made by one of the bigger players and a progenitor of the current orange wine trend in Italy, and represents perhaps the most sophisticated and age-worthy example of the bunch–and at $90 a bottle in restaurants, $60 retail, it had better be. If you close your eyes while tasting this one, you will swear you're drinking Pinot Noir, with all the earthiness and tannins of a light Burgundy. Find it at Et Al, St. Vincent, and occasionally at Terroir.

Jay Barmann is the Editor of Grub Street San Francisco.