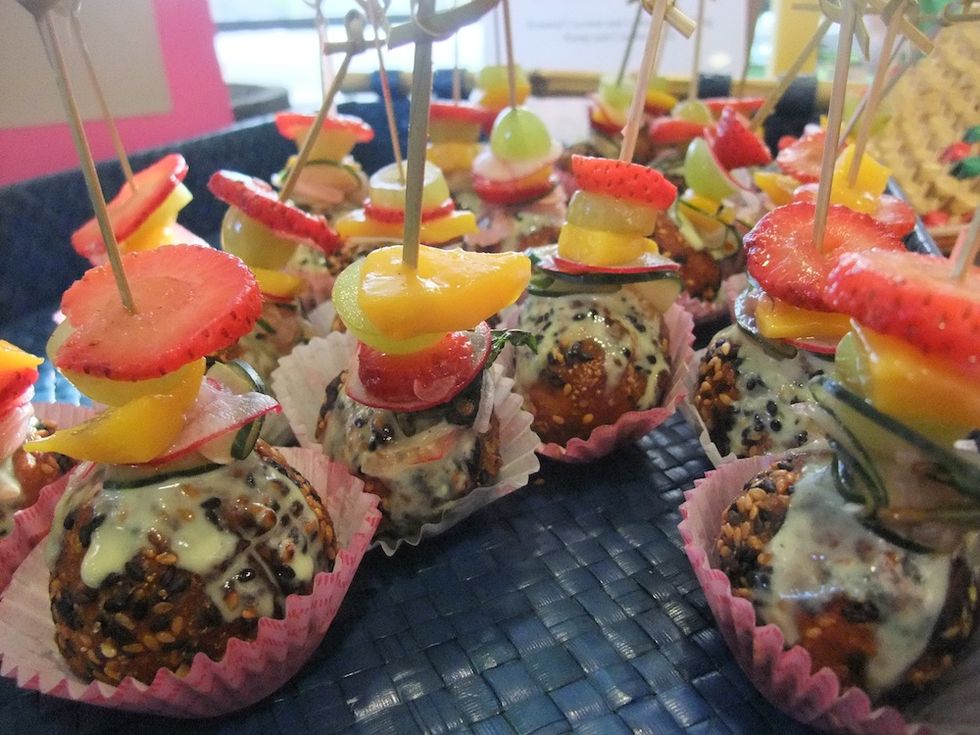 The San Francisco Street Food Festival is back, celebrating its fifth year of thrilling the crowds with affordable nibbles and bites. The main event is on Saturday August 17th in the Mission centered around Folsom and 24th Street, and for the second time, there will be a Night Market, at the site of the Alemany Farmer’s Market on Friday August 16th (tickets are expected to sell out, so plan ahead).

The vendors represent a combination of restaurants and caterers, many whom are La Cocina incubator program participants, not to mention cocktails by Rye on the Road sponsored this year by Campari. Here are some favorites you will not want to miss.

Sugarfoot Grits is one of the newest La Cocina program participants. Stephanie Fields a belly dance teacher is getting closer to her dream of becoming the “grits queen” of the Bay Area. At the night market you’ll get to try her obscenely creamy, cheesy grits made with Anson Mills organic grits and cheese from Petaluma.

Guadalupe Guerrero of El Pipila (a new catering business named for a hero of the Mexican war of independence) will be serving two sopes, one topped with picadillo and another her signature Nopales Guanajuatos, which is a luscious melange of cactus and chile.

It was only a matter of time before Hella Vegan dreamt up a kamut and beet burger with pickled red onions, kale, and secret sauce, served on a donut. Right? What's surprising is how truly delicious it is.

Attention chocoholics! Kika’s Treats is offering a kind of Brazilian truffle at the Night Market, it’s called brigadeiro and is often served at children’s birthday parties. Kika’s version is rolled in cocoa nibs rather than jimmies, and is something of a cross between a soft caramel and a rich chocolate truffle.

Longtime festival participant Chiefo of Chiefo’s Kitchen will be at the night market serving a bread pudding that features ingredients typical of Nigeria–plantains, bread, and chocolate.

Azalina, one of La Cocina's hardest working and most creative culinary entrepreneurs will offer a traditional sweet potato dumpling coated in sesame seeds, flavored with lemongrass and coconut, and topped a zingy sauce and what’s becoming Azalina’s signature--a refreshing mix of fresh fruit.

Dynamo Binita of Bini’s Kitchenwill serve juicy turkey and vegetarian Nepalese dumplings called momo, with a slightly piquant sauce and many secret spices; they are the best momo you'll find in the Bay Area.