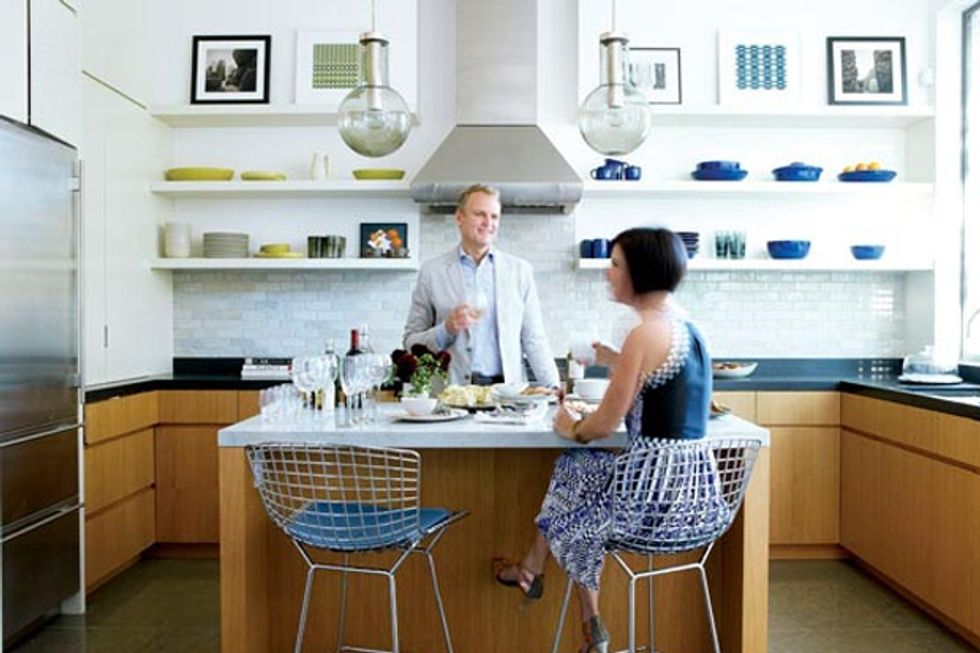 A discerning eye would note the difference between the houses on each side of 20th Street in San Francisco’s Mission District: To the south, rows of ornate Victorians hold court, while to the north, stately Edwardians dominate the view. This slight architectural shift reflects one of the city’s defining events—the 1906 earthquake. After the violent tremors, fires burned for three days and incinerated nearly 70 percent of the city. But firefighters and scrappy citizens rallied on this block. One block south of the firebreak, on Liberty Street, rows of pristine Victorian homes survived the disasters. It was here that homeowners Brian Garrett and Stephen Fronk staged a rescue of their own more than a century later with the help of designer Sara Story, honoring the period details of their second-floor unit while updating its obsolete interiors.

The 1,500-square-foot space included a dark, cramped kitchen, nonfunctional closets, sloping floors and ceiling medallions that were still plumbed for pre-electricity gas lighting. It started when their downstairs neighbor began talking about renovating his apartment, and the couple jumped at the chance to expand at the same time. At the top of their list were festivity-friendly spaces and a proper master suite.

“Our MO was ‘Don’t fight the bone structure,’” says Fronk. “It’s an amazing old house, so we wanted to respect what it is while making it more contemporary.” Architect Todd Davis guided concurrent updates to both units, adding a new, modernized exterior aesthetic and more square footage for both levels. During construction, the mystery of the building’s exact age was solved (most city housing records burned in the fires). “One day, our contractor sent us a text with a photo attached,” says Garrett. “They’d opened up the walls, and written in chalk on the wooden substrate beneath the siding was the year 1878. It was a little bit like an archaeological discovery.”

Click here to read the full scoop on this San Francisco home!