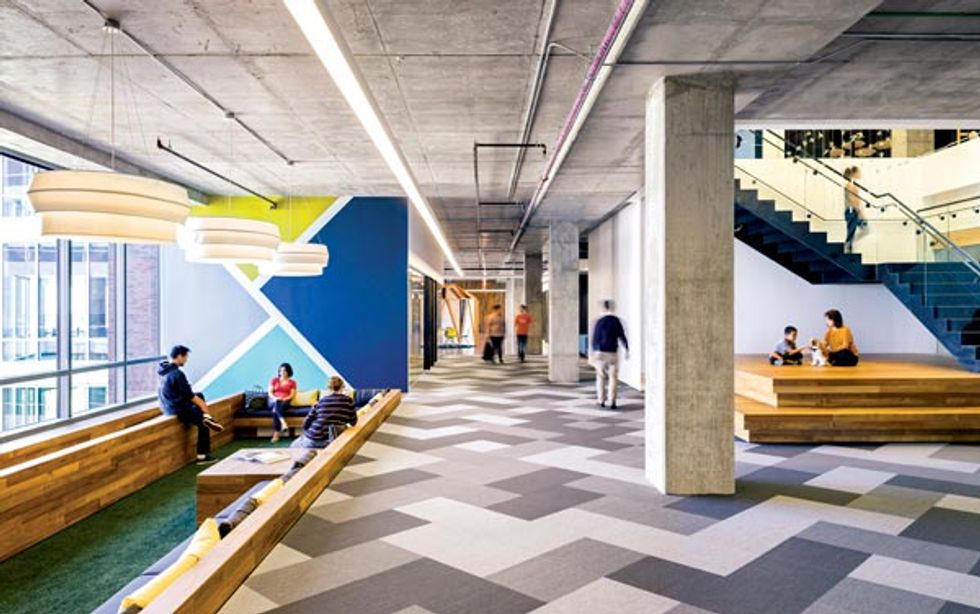 7x7 Magazine's annual Best of SF showcases all you could ever hope to eat, drink, see, buy, know, and do in the city. Here is the Best of Design:

SF architecture firm O+A has shaped the live/work/play office cultures of the Bay Area’s biggest tech companies. They devise personalized and supremely adaptable spaces, allowing the spirit of adventurous startups to inform the commercial buildings that house them. O+A’s greatest hits include conference-room yurts at Cisco-Meraki and a basement whiskey bar at Giant Pixel.

A heat map of Sacramento Street between Spruce and Broderick flares up with the hottest design boutique openings of the past year, including Hudson Grace, the Future Perfect, Anyon Atelier, and Seattle-based Glassybaby, which moved in this past November. The pace hasn’t slowed in 2014—NKOTB Jessie Black hawks sumptuous bedsheets and cashmere accessories, and April welcomed the first design shop for Mill Valley–based Serena & Lily.

Add another name to the roster of celebrity architects transforming the Bay Area landscape. Following in the fresh footsteps of Renzo Piano (California Academy of Sciences), Snøhetta (SFMOMA, Warriors arena), and Frank Gehry (Facebook), Dutch architect Rem Koolhaas of OMA will take another crack at San Francisco (his cheese-grater-esque blueprints for the Union Square Prada boutique never materialized) with his firm’s design for a 550-foot-high residential tower on Folsom Street, near the new Transbay Transit Center.

The collage artistry of Appetite Engineers founder Martin Venezky can be spotted locally on the walls of SOMArts Gallery and the downtown headquarters of Adobe. One of Venezky’s latest projects is entirely mutable—his 27-by-19-foot Arcade wall at Facebook is an employee-hackable signage system designed to broadcast the company’s irreverent messages.

Who needs a climbing-gym membership if you can afford the Nova? This award-winning residential climbing wall concept from SF’s Lunar design studio comprises fiber-reinforced concrete panels with strategic cutouts (aka handholds)and embedded lights to illuminate your route. Ambient settings allow the wall to double as an artistic light installation.

Founders Dario Mutabdzija and Max Marty are dabbling in murky international waters with Blueseed, their floating start-up community. A repurposed cruise ship, slated for renovation at the end of the year, ducks the onerous work visa process and will be able to host up to 1,500 foreign tech innovators from its location, 12 nautical miles (and one ferry ride) from Silicon Valley.

SF can feel like the center of the universe, especially when you lay your hands on Flight Deck, the interactive installation at the entrance to SFO’s rehabbed Terminal 3E. Gensler architects partnered with Razorfish to create a Minority Report–style series of touch screens and translucent oversize glass panels, which impart everything from flight info to local history and goings-on for visiting culture vultures.

For the past two years, engineer Chris Robinson has been slowly hammering away on the Tsunamiball, a 22-foot-long “hot dog bun” of a vessel built of marine-grade mahogany. Currently docked in Robinson’s Palo Alto backyard, the vessel will soon be completed with a functional kitchen and hammocks for Airbnb-ers. Expect ocean-readiness by year’s end.

For fans of nighttime rides or the monthly Critical Mass, it just got way easier to light up your wheels. Mission Bicycle has created Lumen, a reflective finish, available on all its custom bikes. By day it lends a subtle iridescence, but at night it boomerangs available light back toward its source, making riders visible from up to 1,000 feet away.

Conceptual artist David Ireland spent three decades building upon the blowtorch chandeliers and cement sculptures he created inside his humble Mission District Edwardian. Since his death in 2009, philanthropist Carlie Wilmans has preserved the home in the hopes of opening it to the public, a goal that is rapidly approaching as she partners with Jensen Architects to break ground this month on a new foundation and a garage addition; the latter will be an event space with living walls and a roof deck.