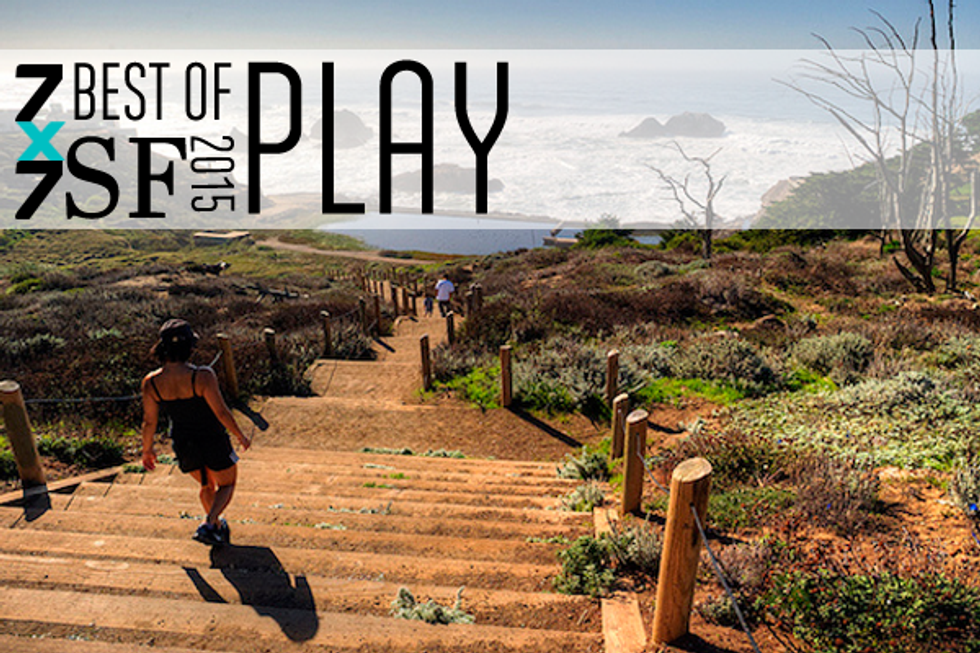 Here at 7x7, we're become accustomed to taking a "sun day." Those rare days when it's over 70 degrees and sunny, and we can't bear the thought of being inside for another minute. So, we've rounded up some of our favorite outdoor activities, as well as workouts and other fun ways to hang.

READER'S CHOICE, Off the Wall Experience or Event: Bay to Breakers

Bay to Breakers is an only-in-San Francisco tradition that celebrates the best this eclectic, madhouse city has to offer. Whether you’re one of the few who make it to the shores of Ocean Beach or the many who stop to rage along Hayes, B2B is the one day of the year where the entire city comes out decked in their very best—from topical costumes to birthday suits. —Marina Smith  //  zapposbaytobreakers.com

From Alite, the SF-based adventure gear company that brought us the modular Sexy Hotness sleeping bags (they can be zipped together for easier, er, cuddling), comes The Outpost, a new concept store in the Mission. Besides shopping the brand’s nifty outdoor equipment, you can stop in for a cup of coffee in the cafe or research local hikes and campfire recipes in the resource section. —Leilani Marie Labong  //  3376 18th St, (Mission) alitedesigns.com

Autodesk artist in residence Dustin Feider has elevated, so to speak, the micro-home craze. With his O2 Treehouse kits, you can build a 64-square-foot geodesic sphere of cedar and steel, designed for tree-canopy living, in just one day. — L.M.L.  //  o2treehouse.com

One of the few waterfalls that has not (yet) been decimated by the drought, Alamere Falls is the perfect destination selfie spot for your and your sweetie. A short two-hour hike through stunning Marin ends at the top of the cascading falls: climb down the steep ravine to see the bottom and enjoy a seaside picnic on the beach. — Sarah Medina  //  Coast Trail (Bolinas), everytrail.com

Off the Grid’s overwhelming assortment of food trucks, each churning out creative and eclectic offerings, might be an indecisive person’s worst nightmare. But for the rest of us, the street food mecca leaves us completely satisfied with cheap eats, community, and the chance to impress that special someone with your knowledge of the extensive OtG secret menu. —M.S.  //  Fort Mason Center, 2 Marina Blvd (Marina), offthegridsf.com.

The Tera fitness mat by Potrero-based Lunar Design is like a Wii for sophisticates: Made from eco-friendly wool by acclaimed textile company Kvadrat, the “carpet” has an intelligent surface, which recognizes movement, and an LED lighting system that shows the proper exercise form. Think of it as obedience school for your misaligned Downward Dog. —L.M.L.  //  2012 16th Street (Potrero), lunar.com.

On 18th Street in the Castro, Spark Art is a tiny space designed to ignite big energy through its array of creative workshops. Whether your dream is to bring the laughs through comedy improv, arrange the most beautiful floral bouquet, or rock your partner’s world with a racy bedroom burlesque performance, you can dip your toes in here. Who knows, you may soon become an expert. — Chloe Harris Hennen  //  4229 18th St. (Castro), sparkarts.com.

Most Tech Bang For The Buck: DodoCase VR Viewers

It may come as a surprise to some that DODOcase, the Dogpatch-based maker of those iPad cases that look like hardback books, is a longtime player in the push for Virtual Reality technology. A partner in Google’s Cardboard Program, DODOcase recently announced the launch of two new VR cardboard viewers, the P2 Pop-Up and the G2 Google inspired design. While they may look like a child’s plaything—think your old Viewfinder made of moving boxes—these simple little contraptions turn any smartphone into a virtual reality portal, with touch screen interaction and 37mm wide lenses. They’re futuristic toys for under $30.—C.H.H.  //  dodocase.com

After more than four decades in San Francisco, the Niners relocated to Santa Clara last season to a brand new state-of-the-art home. Levi’s Stadium has SF style through and through, with gourmet food (including two restaurants from local empire builder, Michael Mina), local craft beer, and 49ers memorabilia from the glorious Joe Montana days. Sure, we miss how easy it was to head to Candlestick after work for Monday night football, but we’re also excited about ordering food from our seats via the new Levi’s Stadium app. —S.M.  //  4900 Marie P. DeBartolo Way (Santa Clara), levisstadium.com

Tired of cycling through the same routines every day? Head to one of the Bay Area's several SoulCycle locations (we love the new one in the Castro) for an enthusiastic workout with a heart-pumping soundtrack and a peer group of diehard fans. The exertion will leave you feeling exhausted but glowing. —Isabel Moniz   //  400 Castro St (Castro), soul-cycle.com.

In anticipation of their move to San Francisco later this decade, the Golden State Warriors revealed a new throwback logo at the start of their championship season. Last year, the Warriors announced that they bought a plot of land from Salesforce in Mission Bay to be used as the site for a high-tech new $700M arena, and they're expected to change their name to the San Francisco Warriors before their move in 2017. Despite the controversy this sparked at the time, with a NBA championship behind them, we’re thinking the new logo is good luck. — S.M  //  nba.com

The Ferry Building is mecca for any resident food lover, and there's no better place to baptize out-of-towners. Go for out-of-this world snacks or a meal at one of the many great restaurants (Slanted Door! Boulettes Larder!); or join the crowds at the farmers markets every Tuesday, Thursday, and Saturday—with so many growers, bakers, crafters, and artisans, it's a prime opportunity to prove to your parents this is the best place on earth. —M.S.  //  1 Ferry Bldg, (Embarcadero), ferrybuildingmarketplace.com

All good workouts need variety, and that’s where Classpass comes in. With access to literally hundreds of different fitness studios across the Bay Area, you can hit up Barry’s Bootcamp on Monday and try aerial yoga on Tuesday all with one cohesive membership. Earlier this year, the tech fitness giant surprised us all by gobbling up Fitmob as well, so there's even more reason to jump on board this success train. —S.M.  //  classpass.com

We're gonna go out on a limb here and just say that Lands End, with its rugged terrain and jaw-dropping views of the Golden Gate, is one of the most scenic hikes in the country. And it's smack in the middle of the city! Beat that, New York. —M.S.  //  parksconservancy.org

Dolores Park on a sunny Saturday afternoon symbolizes the very reason many of us non-natives moved to SF in the first place. Here you'll find every kind of person indulging in every kind of intoxicant over picnics of artisanal sandwiches and craft beer and a backdrop of perfect views. There are hula hoopers, DJs, edibles peddlers, and familes. Find your spot on the gorgeously green and newly reopened North lawn, and see how many Bay Area stereotypes you can spot. —M.S.  //  19th & Dolores St, (Mission)

San Francisco is brimming with POPOS (Privately Owned Public Open Spaces), many of which have a dearth of visitors. Our favorite? The park at 1 Kearney. Nestled on the 11th floor next to the building's landmark mansard roof, this 2,500-square-foot penthouse park features views galore (going down Third Street and up Market Street), manicured shrubbery, benches for relaxing, and, should nature call, a sparklingly clean bathroom. Perfect for a quick lunchtime tranquility fix. —Brock Keeling  //  1 Kearney (Union Square), onekearney.com