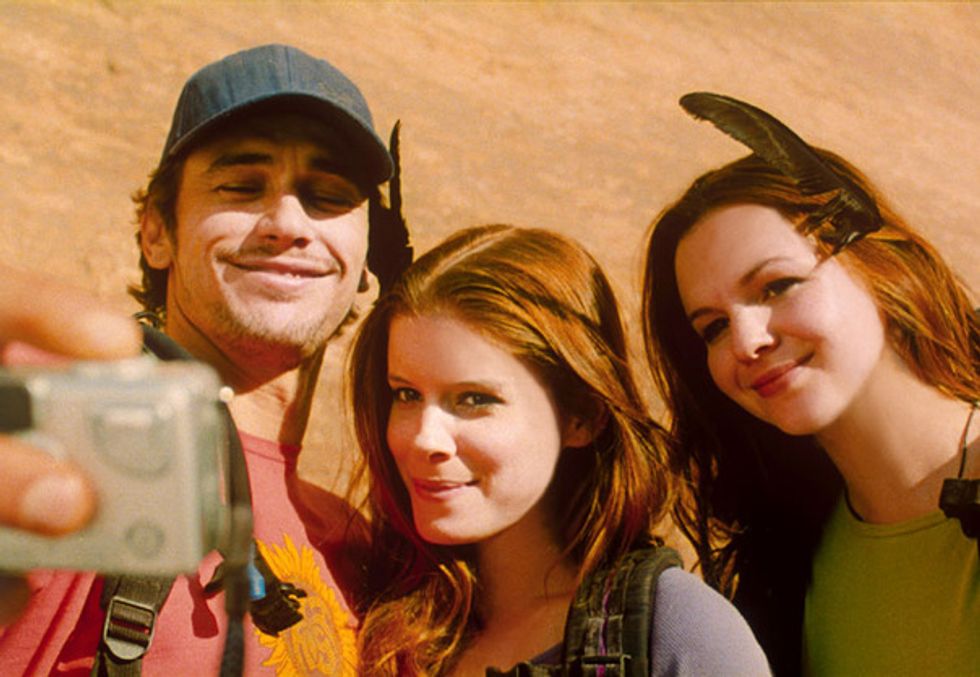 Cutting Yourself to Live: James Franco Endures a Harrowing '127 Hours'

In April 2003, a falling boulder pinned Aron Ralston to the wall of Utah's remote Blue John Canyon for nearly five days, forcing the 27-year-old mountain climber to amputate his right arm in a desperate bid to survive.

In bringing his story to the screen, Danny Boyle deftly avoids the obvious stumbling blocks, transforming a mostly one-man show with a well-publicized ending into arresting drama that speaks not only to Ralston's implacable will but also to the durability of the human spirit. Boyle has described 127 Hours as an action movie about a man who can’t move, and the description is apt. Ralston’s existential struggle seems almost to sprint to its grisly conclusion.

The director has traveled a similar path before: In 2008’s Slumdog Millionaire, written by Hours co-author Simon Beaufoy, he used revealing flashbacks to tell the story of a teenage game-show contestant, squirming on the hot seat through a televised test of wits. Yet Ralston’s memories are presented here not as expositional pieces in a coherent puzzle, but as the fragmented musings of an agitated mind.

Keenly aware of his mortality, measuring his remaining water by the milliliter and scraping his epitaph onto the canyon wall with the cheap, multipurpose tool he later uses to cut through his forearm, Ralston (James Franco) bides his time reflecting on girlfriends past, a family he seems to keep at a distance, and his stubborn insistence on playing the “hard hero” – a solitary figure lost in his own thrill-seeking world.

It’s understandable that two women hikers Aron encounters on the way to his destiny walk away wondering whether they left any impression on the man, whose passion for hiking seems to eclipse any need for lasting human contact.

An engineer by profession, Ralston yearns to be a wilderness guide and lives out his dream with these two, leading them along an off-the-map trail, daring them to keep up, then abruptly leaving them behind. Later, trapped and alone, he arrives at a new appreciation of  so many people he has taken for granted, including the hikers (Kate Mara and Amber Tamblyn) he so blithely abandoned.

Yet there is nothing trite about Ralston’s awakening. Boyle, who indulges in fleeting flights of sentimentality but keeps his movie grounded in the grim reality of the moment, takes his cues from Ralston’s 2004 memoir, Between a Rock and a Hard Place. With a story so powerful, he wisely avoids embellishment, though his stylized camerawork and Jon Harris’ frantic editing neatly capture Aron’s descent into dehydration and delirium.

Matching their efforts is Franco. Playing Ralston as oddly aloof but rocked back to self-awareness by the prospect of dying alone, he displays a kind of manic intensity, whether racing toward the crevice that nearly becomes his tomb or recording his ordeal on his camcorder. Even during his darkest hours, at wit’s end with no prospect of rescue, his stream-of-consciousness ramblings are the mesmerizing highlight of a superbly entertaining misadventure.

Franco’s performance, like A.R. Rahman’s score, seems perfectly attuned to Boyle’s storytelling – haunting, uplifting and breathlessly paced. Watching Ralston slice through flesh, bone and tendons, sacrificing his arm to survive, we sense that Ralston is losing a hand but regaining a life that is more than ever worth living.

Before & After: This remodel of a Sunnyvale Eichler turned a Google-employed homeowner into a pro designer