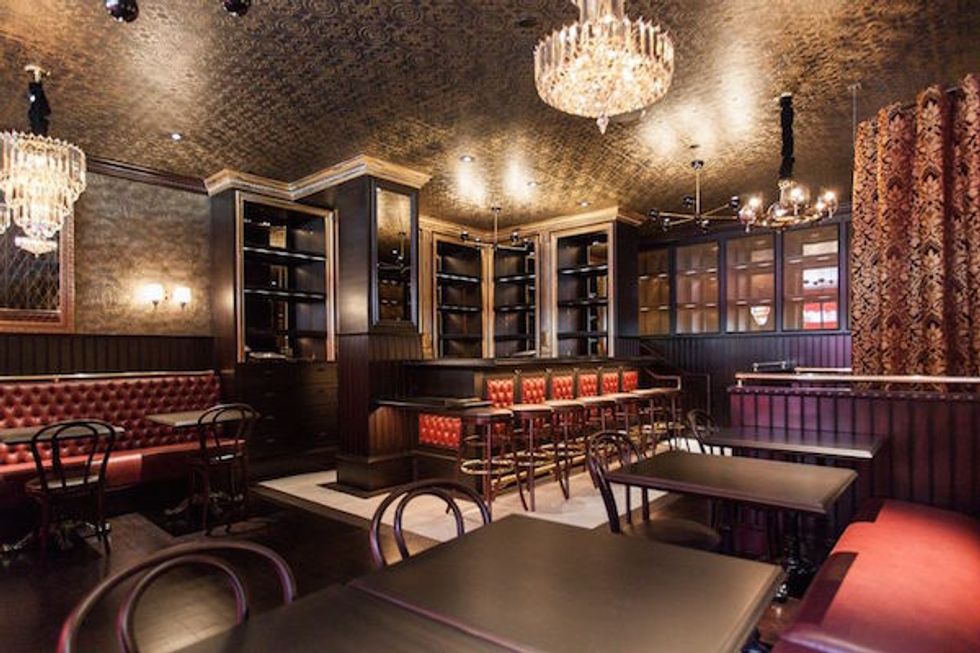 Drink Here Now: Where to Get Lit for SF PRIDE

Okay, it's not an official PRIDE celebration, but Speakeasy is pretty proud to be turning almost 18. This Saturday, they're celebrating 17 years of brewing craft beer in San Francisco with five hours of live music, food pop-ups, and exclusive beer releases. The party starts at 1 p.m. on June 28 at Speakeasy Ales and Lagers, featuring unlimited beer tasting with 15+ beers on tap, including Untouchable IPA, Big Daddy Session IPA, Harvey Milk Stout, Blind Tiger Imperial IPA, and Speakeasy's most elusive brew, Syndicate No. 02. Tickets are available online for $40 to $60 each, or $10 for designated drivers. 1195 Evans Ave.

With prime real estate for watching the PRIDE Parade, Bluestem Brasserie's upstairs patio is the perfect place to Color Your World with Pride on Sunday, June 29. In addition to their heralded brunch menu and a distinctive collection of innovative cocktails, guests can get friendly with The Green Lantern. Made with pisco, basil, cracked black pepper, and a salt & sugar rim, the bright green cocktail is named in honor of the gay DC Comics superhero. Though you'll need to make reservations to view the Pride parade from the patio (10:30 am kick-off), The Green Lantern will appear all weekend. 1 Yerba Buena Lane

Power Up at E&O Asian Kitchen

If you didn't catch that Green Lantern reference above, E&O Asian Kitchen has a cocktail that might help adjust your gaydar after the parade insanity. The Blushing Gay-sha, made with Pueblo Viejo tequila, sake, lime, agave, and prickly pear, is a sweet and tangy spin on one of their most popular drinks, the Blushing Geisha. Pair it with the modern Asian cuisine, care of Chef Sharon Nahm, to power up for subsequent stops on your PRIDE drinking tour. E&O Asian Kitchen is located in bustling Union Square, which means you should make reservations beforehand (415-693-0303). 314 Sutter Street

Stumble Over to the Burritt Room

A mere block away from E&O, you'll find the Burritt Room + Tavern at the Mystic Hotel. Named for nearby Burritt Alley, where detective Sam Spade's partner Miles Archer was [SPOILER] gunned down in The Maltese Falcon, this speakeasy-style tavern is rarely too crowded to enjoy a drink at the bar. If you need respite from the PRIDE crowds after 5 p.m., slip inside for a Castro Cobbler, made with Amontillado Sherry, Applejack, Peach, and Turbinado Sugar. 417 Stockton

David Sedaris says straight men would not share dessert (at 5:00 minutes), but we're pretty sure that rule doesn't apply to Gaspar Brasserie's flaming after-dinner cocktail: the Café Brulot. Prepared tableside, the drink for deux is priced at $28 and mixes XO cognac, orange liqueur, brown sugar, cloves, cinnamon, lemon zest, orange zest, and coffee. There's also no rule that says you must partake of Gaspar's exquisite French cuisine before ordering the Café Brulot. But if you think you'd like to have dinner here after the parade, reserve a table beforehand by calling 415-576-8800. Gaspar Brasserie is just a few blocks from the Burritt Room and E&O Asian Kitchen. 185 Sutter