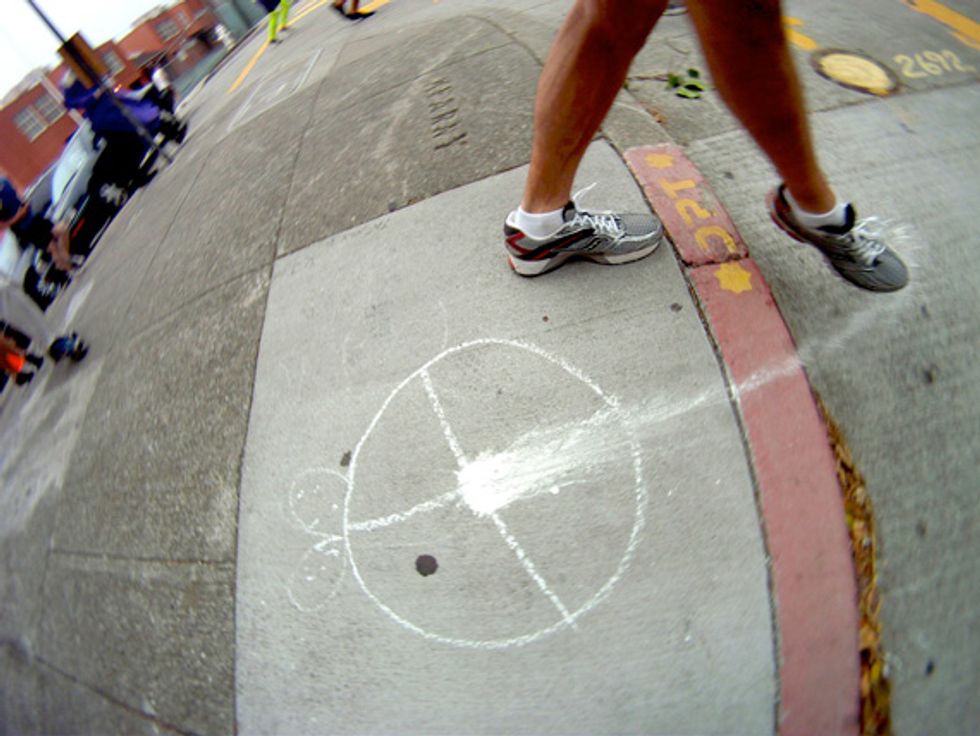 Drinkers with a Running Problem: My First Hash with the San Francisco Hash House Harriers

“Remember when we were kids, all of us ran. We ran in the playground, in the halls at school, at home, in the grocery store, and everywhere else we went…and we loved every minute of it. As adults, running has become something different. The fun part seems to have gone away, and running is something we have to do, either to stay in shape or get back into shape. Hashing puts the fun back into running.”

-From the San Francisco Hash House Harrier’s Guide to Hashing

Hashing. It sounds like something involving pot, or maybe the delicious potato breakfast from McDonald’s, but it’s actually one of the most zany and memorable way to explore the streets of San Francisco by foot. Take everything that you love about Bay To Breakers, amplify it, do it on a regular basis, and that’s hashing.

The process of a hash is fairly straightforward. Everyone gathers at a predetermined location, usually an intersection in San Francisco. Two experienced hashers from the group volunteer to be the hares for the night. With everyone waiting, the two hares take off, each one equipped with a bag of flour. Every so often, the hares mark their running trail by leaving flour on the sidewalk. After about 15 minutes of waiting for the hares to disappear, the rest of the pack sets off to hunt them down, led by an FRB (Front Running Bastard, defined as “a fast wanker who’s more intent on winning the hash than having a good time”).

When a hasher sees flour, the correct term to shout is, “On On!” to indicate that you are onto the hare’s trail. Problem is, the hares will often leave false trails, and so the pack inevitably ends up backtracking and stumbling around the city, scouring blocks in pursuit of the right trail. And so it goes on, with hashers running down random alleys they would otherwise never explore, until the hares are found.

That’s when the drinking begins. There’s a keg at the finish of the run, and chugging beer is just as pivotal to hashing as the running itself is, if not more so. As for the running, hashes last somewhere around an hour, but the element of the search make them accessible for runners of all speeds.

It may sound like the epitome of San Francisco culture, but hashing actually dates back to the 1930s in Malaysia, when a bunch of rowdy British guys decided they wanted to mimic the hunting game “Hares and Hounds.” They laid out the original groundwork for how a hash operates, and not much has changed since them. The group named themselves the Hash House Harriers in honor of a local restaurant where they hung out, and to this day, the club, which has grown to over 6,000 international chapters, proudly describes itself as a drinking club with a running problem.

On Friday, August 26, I went to my first hash. I chose a big one for my first, since Friday was the commemoration of the 1500th run by SFH3. Most of the hashers were in 80s attire, since San Francisco hashing started in the 80s. When I showed up to North Beach’s Washington Square, I spotted the neon spandex and knew I was in the right place.

Hashers are given nicknames, and pretty much all of the names are lewd. So meeting for the first time is a bit strange. I jutted out my hand and introduced myself as Mark to the first person I came across. The smiling girl shook my hand and said in return, without blinking, “Hi, I’m Kind Of A Whore.” I was next introduced to Sit On My Facebook, Son of Shit, Cherry Poppins, and others.

The run started around a keg with an explanation of the rules. No one listened because they all knew the rules already. I listened closely but was still a bit confused. Truth is, I was nervous and excited. I didn’t want to say the wrong thing when I found specks of flour on the sidewalk.

And off we went, charging up to Coit Tower, shouting as we paraded the streets. I found that when you find some flour, you are supposed to swipe it in the right direction of the trail, so the hashers behind you can stay on the hunt. Sit On My Facebook drove ahead and met us at Coit Tower with a college-esque concoction of something that was way too strong, and then we scattered again.

The route is deliberately circuitous. You’ll come up to an intersection, follow the flour to the right, do a huge loop and climb a killer hill, and end up back at the same intersection, only on the other side of the road. The point is not to get from A to B as quickly as possible. It’s about getting from A to B with as much fun as you can.

We ran through the tourists at Fisherman’s Wharf. A security guy vaguely threatened to kick us out of the boardwalk area if we didn’t stop running, but we kept running. He didn’t chase us. We convened again at Pier 39 for rum and coke, and off we ran again. The night ended back where it started, with awards, songs, and more beer.

It was, without a doubt, the strangest run I have ever been on. And I’ve run Bay To Breakers several times. But in B2B, people know what to expect. When you’re on a hash, bystanders have no idea what the hell is going on. To them, it’s just a pack of joggers in strange clothes hustling by, yelling out, “On, On!”

It was also one of the most fun runs I’ve ever been on. We worked together to find the trail. We laughed. We got lost. We unintentionally went all the way up Lombard Street when we only had to go halfway up, so we cursed like sailors and then pissed people off by running down the famously winding road, backing up traffic. We talked about how silly it all was, and then ran even harder.

In a nutshell: we hashed.

The SFH3 hosts hashes every Monday and Thursday, and on alternating weekends. Check their website for the calendar of hashes, which includes locations for the start of their hashes, as well as some of the most hilarious user guides you’ll ever come across. While your first hash is free, you otherwise need to bring $6 to pay for the good, cheap beer.