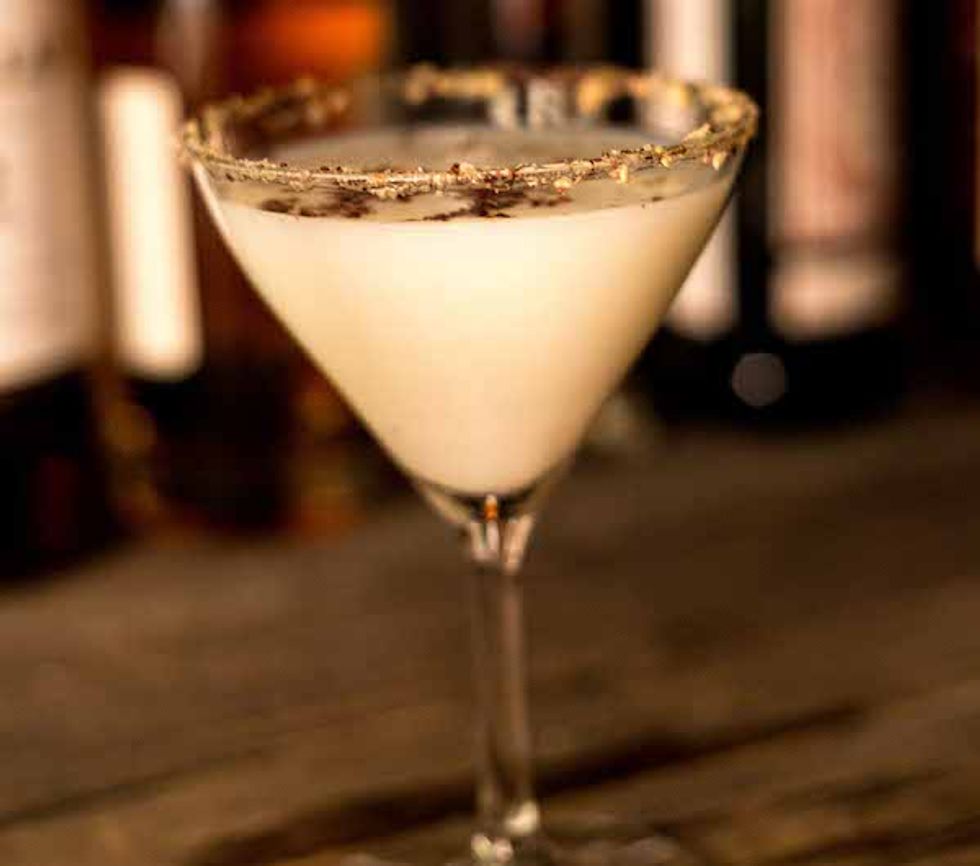 The best parts of the holidays include quality time with family, gifts, great food, and let’s face it, drinks. Why should Rudolph be the only one red in the face? If all you want for Christmas is booze, celebrate the holiday season with these great festive cocktails in the East Bay.

Oakland’s District is welcoming Santa and the entire East Bay with their Milk & Cookies cocktail. The drink is a boozy eggnog of Buffalo Trace Bourbon, cognac, cream and eggs with crushed chocolate cookies, mixed with smoked brown sugar and decorated with chocolate shavings. This cocktail is worth staying up late for on Christmas Eve. (pictured above) 827 Washington St, Oakland

If your Christmas tree smells good enough to taste, try the Evergreen Manhattan at Downtown Berkeley’s Revival. This blend of Willett 4-year bourbon and Punt e Mes vermouth has a distinct essence of pine tree from a couple spritzes of Douglas Fir tincture, a mix of Douglas Fir eau de vie and gin. The cocktail packs a strong kick--even the cherry garnish is brandied. 2102 Shattuck Ave, Berkeley

Forbidden Island Tiki Lounge in Alameda really does make it seem like an island--one we’d like to vacation to this Christmas. Head bartender Becca Morris’s Yule Log Grog is a traditional swizzle cocktail, with scotch, bourbon, lemon and house-made cinnamon tea syrup. The freshly ground nutmeg and cinnamon stick garnish will make you want to curl up by the fire. 1304 Lincoln Ave, Alameda

Santa’s reindeer are not messing around. Try the Blitzen’s Revenge at Toast in Oakland’s Rockridge neighborhood. The gin-based cocktail has a dash of housemade pink peppercorn syrup and cinnamon-cranberry puree, with a splash of Prosecco. The cranberry and rosemary tip garnish will remind you of holly, as you become jolly. 5900 College Ave, Oakland

On the first day of Christmas, my true love gave to me: Make Westing’s boozy Partridge in a Pear Tree. Uptown Oakland’s popular bar is serving the Partridge, a shaken blend of Nolet’s gin, orchard pear liqueur, lime and Allspice dram. The cherry and mint leaves garnish, made to look like holly, make the Partridge a festive seasonal cocktail. 1741 Telegraph Ave, Oakland

Oakland Chinatown’s Tribune Tavern is expressing the spirit of Christmas with their seasonal cocktail, the Magi. A sophisticated mix of Templeton rye, simple syrup and house-made bitters, the secret ingredient is Frankincense oil. The golden cocktail is Tribune Tavern’s way of wishing you a Myrrh-y Christmas. 401 13th St, Oakland

If you’re torn between a festive cocktail or holiday dessert, why not have both? Uptown Oakland’s Plum features the Eggnog Milkshake--a twist on traditional eggnog, spiked with apple brandy. The glassful of Christmas cheer is topped with whipped cream and ground nutmeg. 2214 Broadway, Oakland

Danville’s Esin Restaurant turns Santa’s hat upside down with their seasonal Santa’s Cap. The sweet drink is a blend of Hangar One Mandarin vodka, rum, raspberry and lemon juice. The rim is dipped in honey with snowflakes of shredded coconut to garnish. This sugary treat is the perfect Christmas nightcap--in more ways than one.  750 Camino Ramon, Danville

Oakland’s Legionnaire Saloon is taking a holiday twist on peppermint coffee with the Wiseman’s Flask. This traditional Irish coffee drink is spiked with Jameson, topped with whipped cream, cinnamon and a mint leaf. With just one sip, you’ll have a cream mustache to rival St. Nick himself. 2272 Telegraph Ave, Oakland