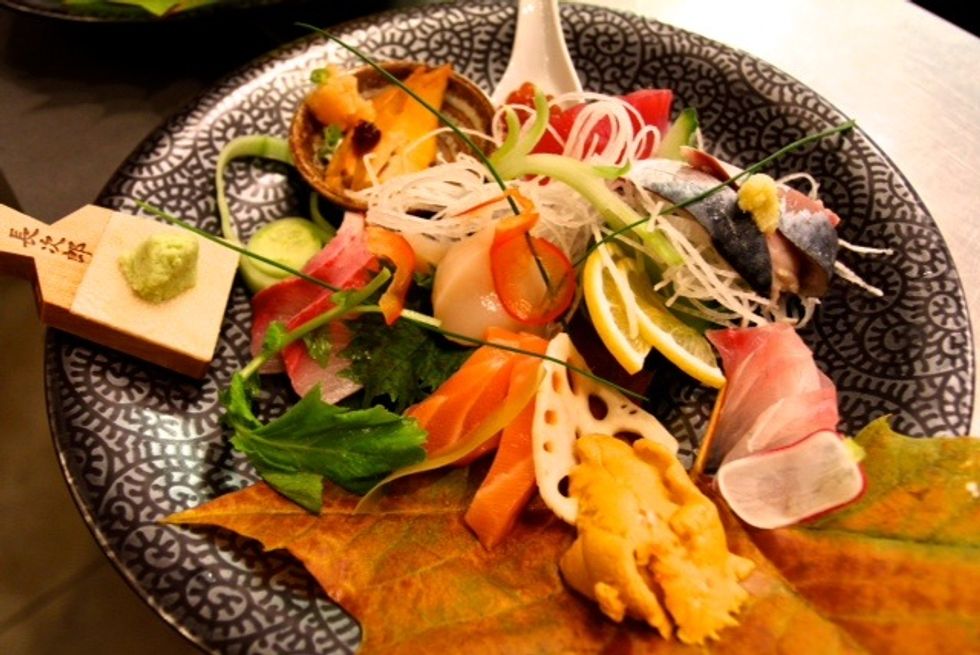 Sushi, Kurobuta malt cured pork chop, Snake River bavette steak, and grilled Wagyu beef tongue are part of the pleasing components of a new spot from a well regarded Yoshi’s chef in West Berkeley -- all the better when paired with sake or cold craft beer. The new restaurant is in the former O Chame space, and is a first for a noted chef who has a story that is as compelling as it is deeply personal. Down the road, suds, cheese and pretzels from Sierra Nevada are close enough to the freeway for you to nab a leisurely break before battling that holidaze traffic scene. If you’ve got someone on your holiday list who is naughty and nice enough to gift a beer growler, look no further.

In West Berkeley, executive chef Shotaro Kamio has opened Iyasare (ee-ya-sah-rhey) on Berkeley’s historic Fourth Street—this is the chef’s first solo venture outside of Japan. After a seven-plus run as top toque for both Yoshi’s locations (Oakland and San Francisco), Chef Kamio is now turning out dishes like cedar plank roasted King salmon that has highly desirable caramel and buttery tasting notes; and miso roasted eggplant--which is already coming in as a treasured dish for veggie lovers and those who love them. Cocktails and sake are a part of the dining scene here, and there’s a fair selection of craft beer and wine to round the drinks out. Look for immaculately prepared sushi (sourced locally as well as from Tokyo’s renowned Tsukiji fish market), rich and marbled slices of Wagyu tataki, and the “what you want” okonomiyaki Japanese pancake, which has a grilled finish and aptly combines creamy, salty, savory and sweet in one dish. The age-old technique of roasted and charcoaled meats showcase the chef’s talents, and adventurous culinarians should definitely order the Wagyu beef tongue grilled tableside on a charcoal bincho tan sumi (hibachi).

On a more serious note, the restaurant’s name means “to be healed,” and is dedicated to Kamio’s parents, friends, and family affected by the earthquake and tsunami that decimated the northeastern coast of Japan in early 2011. The epicenter hit close to the center of the Sendai coast, where Kamio lived with his mother, father, twin brother and two sisters until his mid-twenties. He now lives in El Cerrito with his immediate family. 1830 Fourth St., Berkeley, (510) 845-8100.

Under the freeway near Brennan’s (a longstanding Berkeley institution) is a new beer tasting spot from Sierra Nevada, who helped launch the small batch beer movement all those years ago in Chico. Cheese and beer tasters are on the menu at the Torpedo Room, which does pours in four ounce glasses. Yes, you can go all “Big Dog” and buy their 64-ounce growler, in which case may we kindly recommend the barrel aged Torpedo with Citra hops? Set expectations before coming in: there are not any pints or pitchers from the friendly and competent staff here, but the tasting glasses do allow more exploration for not too much coin. The cheese tray is of the local and delicious variety, and keeps the hunger at bay for six dollars. Or you can stick with the carb-y fun and nosh on a pretzel. 2031 4th St., Berkeley (530) 893-3520.