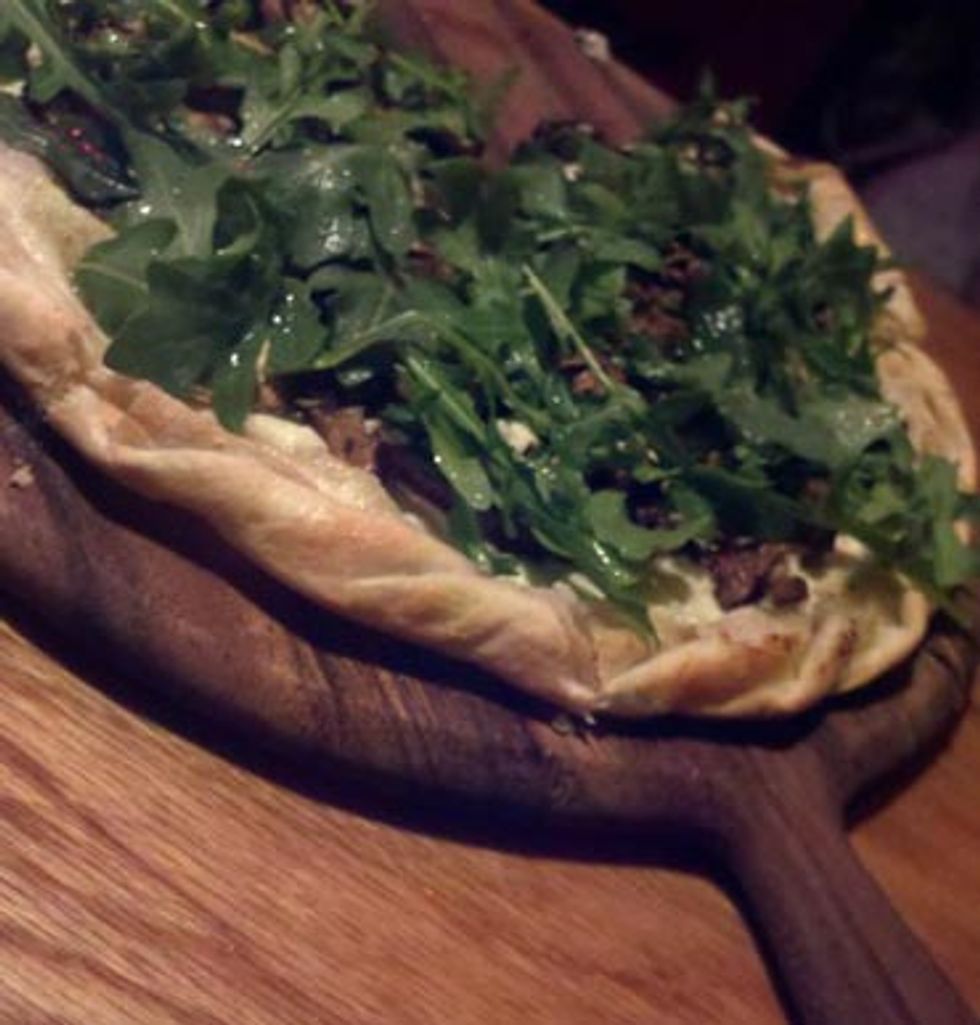 Earlier this week two friends joined me on a journey to taste real flammenkueche at Etcetera Wine Bar in the Mission. The four-month-old wine bar is owned by Alexandra Gerteis, a native of Alsace, the region of France right next to Germany where flammenkueche originates.

For those of you who think flammenkueche sounds like a German profanity, I should tell you it's a very close cousin to pizza. The dough is yeast-risen, rolled to a round and baked off at high heat with various toppings. Etcetera offers eight options, many of them inauthentic riffs like "The Parma" with prosciutto and mozzarella.

But before getting fancy, "The Alsatian" is your flammenkueche benchmark, spread with the traditional combination of creme fraiche, caramelized onions and thick-cut bacon. Gerteis instructed us—in her inimitable accented way—on how people eat this in France: by rolling each slice from the inside out, forming a cigar. Since the slices are weak in the middle, it's easier to eat this way, although rivulets of grease still ooze out of the side as you go.

Gerteis offered a pairing of bone dry Reisling. Its acidity makes a text book cut in the richness of bacon on top of buttery onions and soft cheese—not to mention it too is from Alsace. The pizza—I mean flammenkueche—was gone in the blink of an eye.

One thing about these creations is that they feel light, despite the obvious fact that they are not. The center of the crust is somewhere between a crepe and a very thin pizza, stretching out to a crispier edge. The undercarriage of the pizza was more white than brown—a mark of true flammenkueche? I don't know, but it certainly seemed more delicate than the toasty, golden-bottomed pizza slices Americans are used to. For the record, Gerteis said she tried to replicate the flavors of true flammenkueche with local flour, but it wasn't working. She told us she gets the flour from France now, and she's happier with the results.

Onwards to Gerteis' best seller,  "The Piemonts," covered with mushrooms, an even bed of arugula and the faintest touch of truffle oil. This one was paired, appropriately as well: with Bordeaux. In fact, Gerteis—a former export manager for Chez Cave de Ribeauvillé—rattled off a different wine match for each of the eight flammenkueche offerings on the menu. Some simple bruscette, salads, cheese and charcuterie round out the options, although— looking around the dining room on our visit—most people were ordering the flammenkueche, and they were polishing off one per person. Next time, we'll order three.