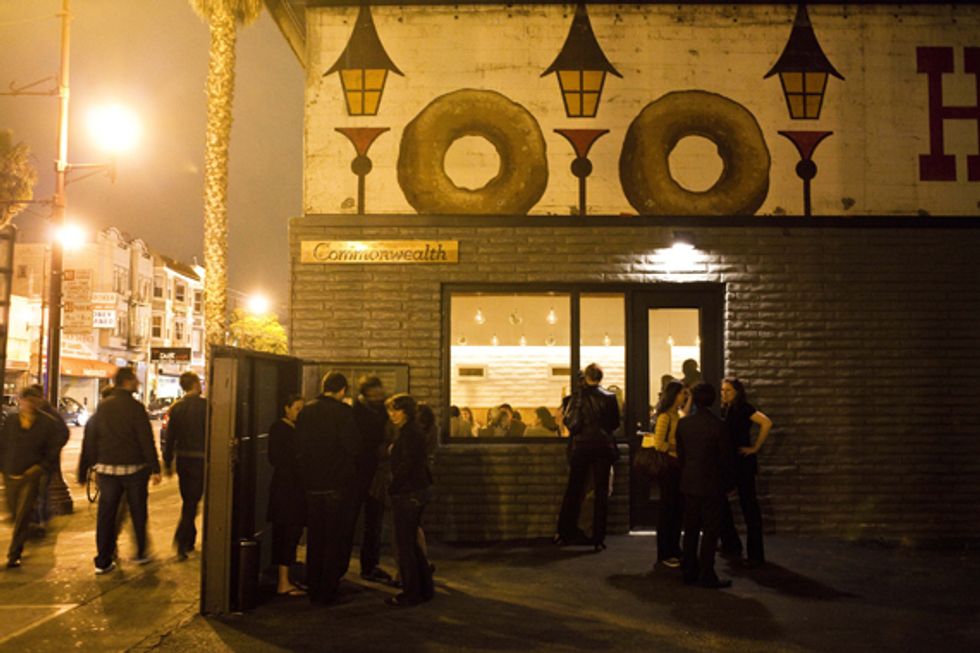 Let's face it: for the last year, San Francisco's dining scene has been all but crushed under an avalanche of pizza, sandwiches and burgers. Only in the last several months have we begun to dig our way free. Commonwealth is helping.

This restaurant, opened by Mission Street Food founder Anthony Myint (a recent mediadarling) and Jason Fox (formerly of Bar Tartine) isn't like other joints, for better or for worse. There is no fried chicken on the menu. There is not a salad of Little Gem lettuce. Instead, Fox is serving envelope-pushing dishes, at times bewildering, that fit a restaurant as forward-thinking as Commonwealth. Case in point: a portion of proceeds from each tasting menu sold are given to a local charity, with the recipient changing monthly.

The spice-dusted potato chips with vinegar foam, which are a complimentary first snack, are at once whimsical and sensible: chips and dip reimagined. Grilled shishito peppers are set on a goat cheese mousse, a pretty straightforward preparation, but the addition of rose petals adds another layer to the dish. The timid will find this restaurant challenging--what to make of hen and spot prawn with chocolate-almond emulsion? So I suppose it bears saying that Commonwealth isn't for everyone, not sharing the same obvious crowd-pleasing qualities as, say, Nopa or Town Hall. And it also should be said that sometimes Fox's experiments go awry, as in the coconut milk-poached halibut with sea beans, Little Gem lettuce and grapes. But when the plates succeed, which is much of the time, they are pleasing on both a gastronomic and an intellectual level, all the more so because of the seeming improbability of their genius.

And even when Fox stumbles, I forgive him, if only because he's a risk-taking cook in a city that generally frowns upon anyone who bucks the culinary status quo.