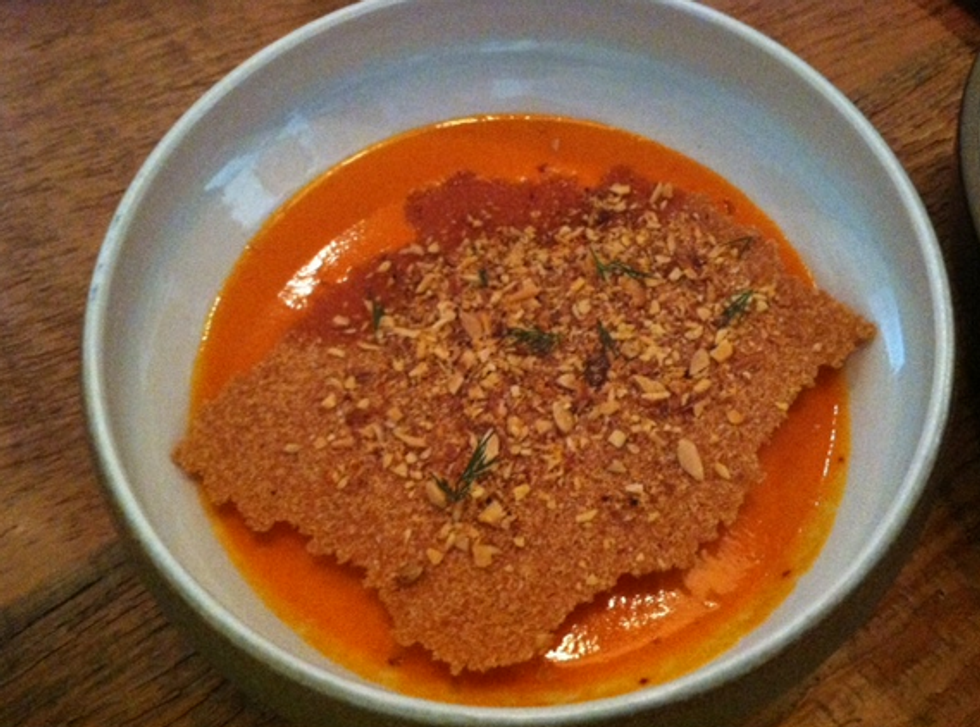 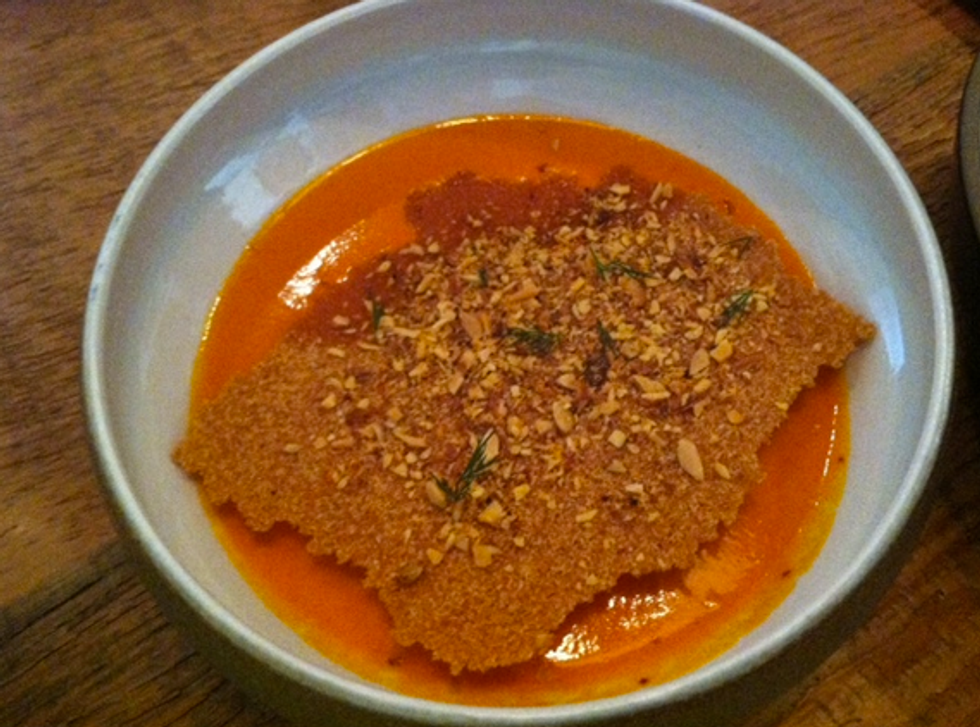 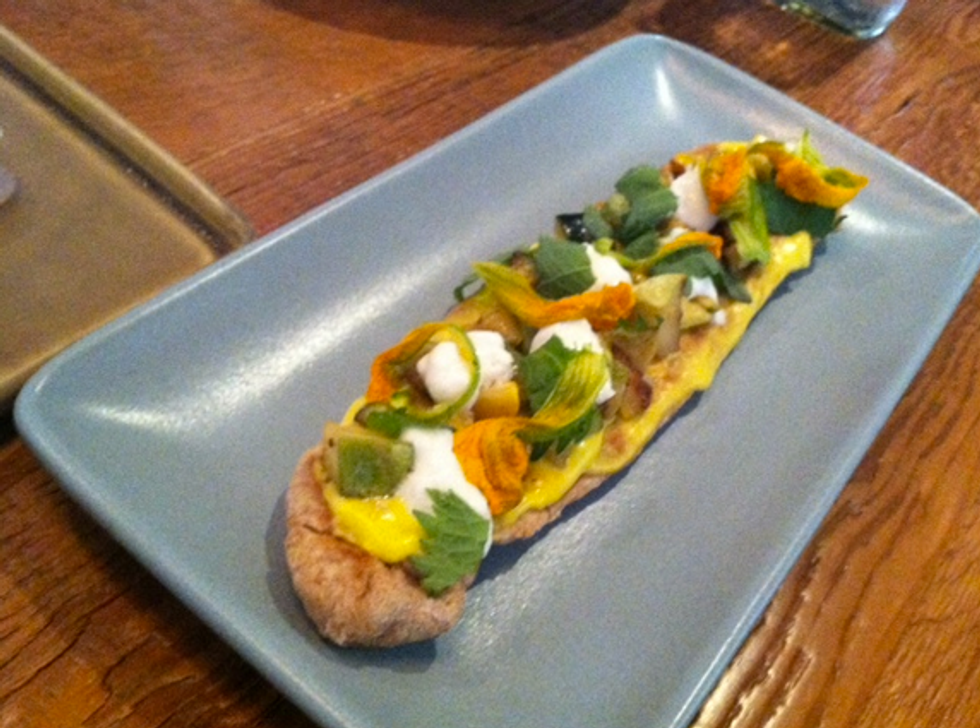 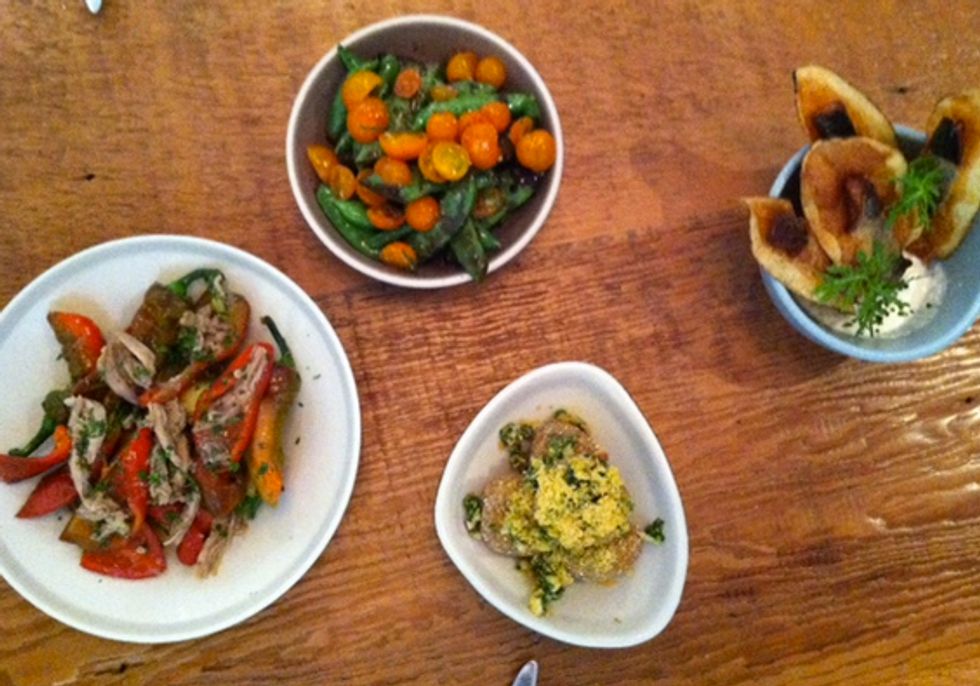 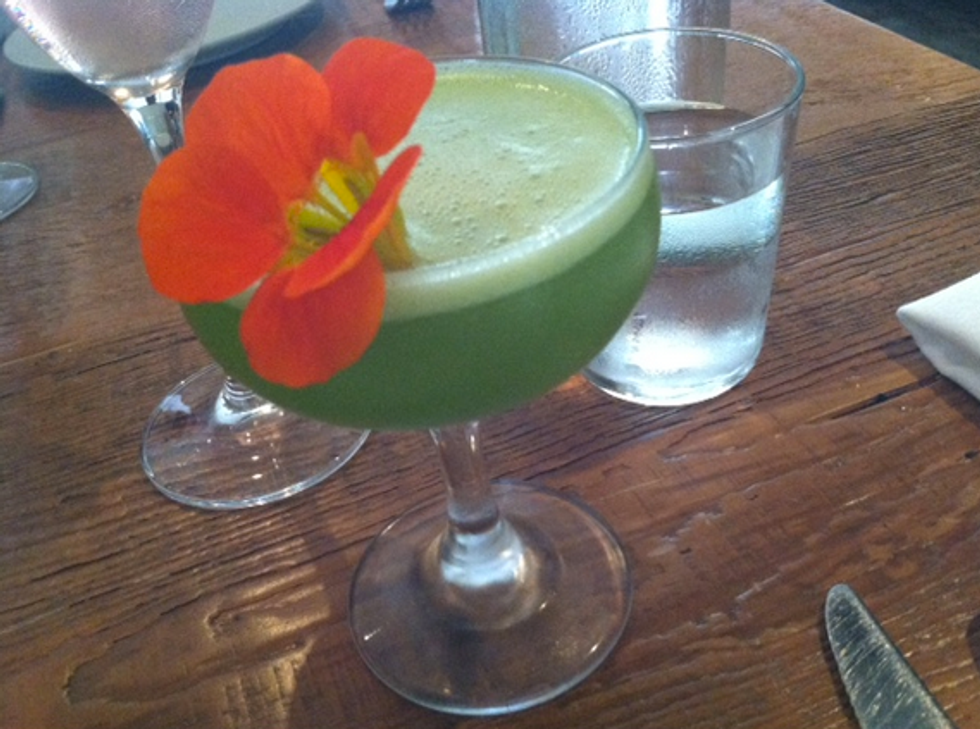 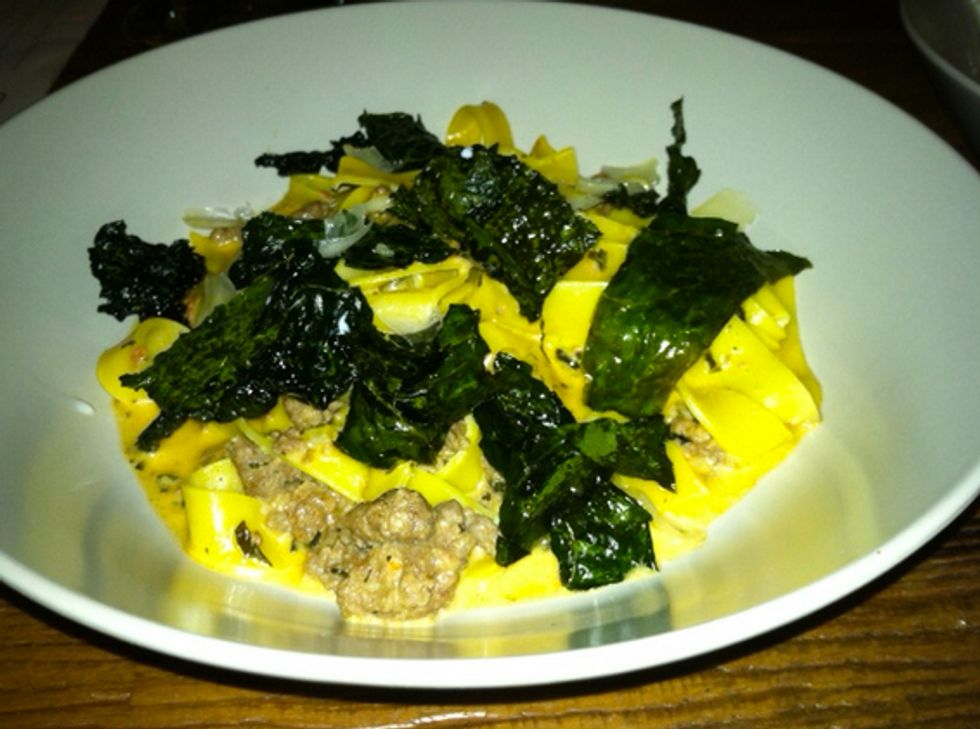 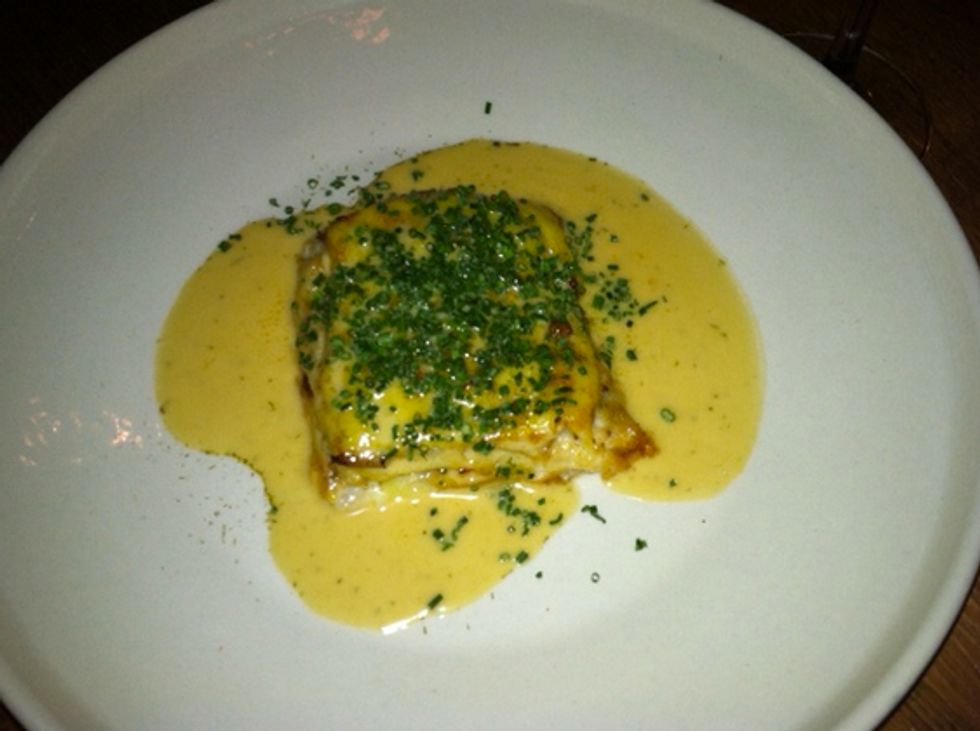 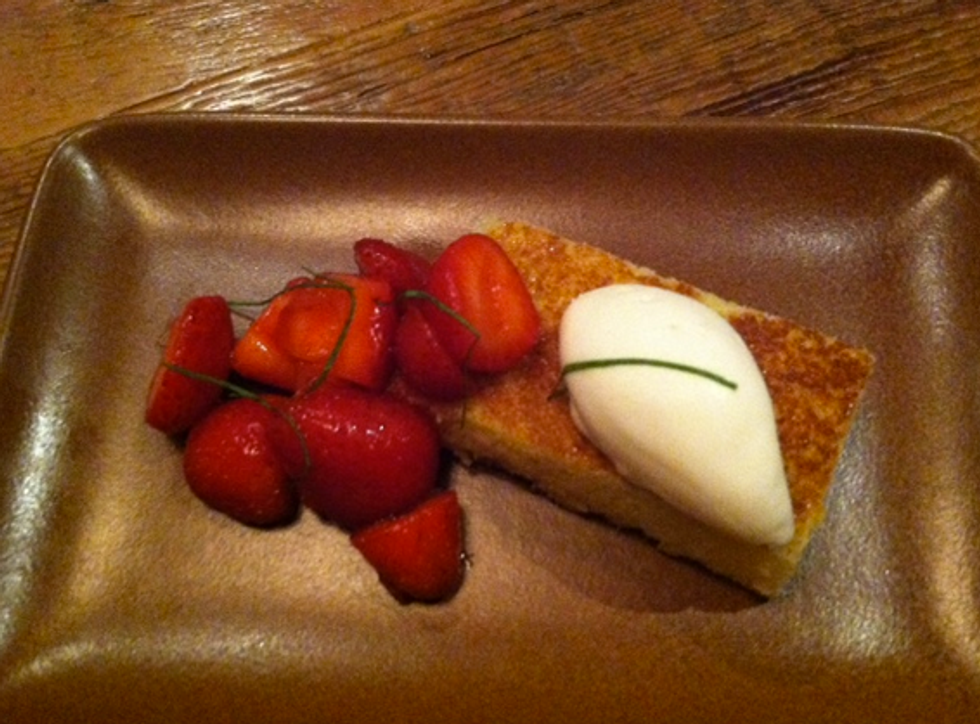 Rich Table is a new restaurant in Hayes Valley that's doing its part to take quintessential Californian fare in a new direction. I'd put it in the same camp with other hot spots like Bar Agricole, Outerlands, and Central Kitchen that are using market-fresh ingredients and incorporating them into dishes with global accents like vadouvan, espelette, and the occasional "snow" or "ash" for a molecular boost. All of these places are run by young chefs with great pedigrees, a reverence for local ingredients, and a desire to give something new to the dining public.

The owners of Rich Table, Sarah and Evan Rich, have cut their teeth at places like Coi, Michael Mina and Bouley in New York, but they're shooting for something far more approachable here. Entrees top out at $25 for sirloin with pole beans and potato chips, but a party could easily make a meal by ordering one appetizer ($9-13) and one pasta ($15-17) each.

"We want this to be the kind of place a family could return to a few times a week," says Evan Rich. The place is barn-like and unassuming with wooden walls that look like they've been dipped in bleach on the bottom half. Lights hang from spindly industrial pipes mounted into the walls. Colorful fresh flower arrangements are littered about, and pillows line the booths, so you can toss them around like you would at home while watching TV. It's refined comfort in every sense of the word—a sentiment that comes through in the menu for the most part too.

Rich Table inherited the liquor license from former inhabitant Paul K., and partner and beverage director Maz Naba (also formerly of Coi) is discreetly continuing the cocktail presence with four market-fresh cocktails per night. On our visit, the drinks were a highlight. Take "The Big Night" ($10), made with nasturtium and ginger syrups and lemon juice to counter a mezcal that doesn't hit you over the head with smoke. It fills a coupe nearly to the brim with vivid grass-green liquid, topped with one bright orange nasturtium. It's brilliant, inside and out.

Our party of four was able to try much of the menu, starting with the perfectly round corn fritter orbs sprinkled with cilantro salsa verde and yeast ($7). They're familiar fried goodness, but they still weave in the owners' desire to play with funky flavors. Reading the menu, you'll see lots of things that sound unusual, maybe even odd: Yellowtail cubes worked into pasta, beeswax sprinkled on eggplant, and sprouting seeds served with duck confit. Dishes arrive in mismatched Heath ceramics, presented with just enough abandon and abundance to give them flair while allaying all fears of potential malnourishment. Dessert will not be happening at a taqueria.

Even though there's a $4 charge for the bread, order it. The housemade wild fennel levain with churned butter has so much character it puts Acme to shame. There's also a seasonal plancha bread ($12), which is like a thicker oblong piece of whole wheat naan, topped with creamy yellow squash puree and finished wtih squash blossom ribbons, slivered shiso, chunks of burrata and roasted squash.

Another highlight was the sweet Italian red pepper soup ($9), a shock of red at the table with the bold, slightly smoky, ripe red pepper flavor to back it up. It's topped with a super-thin pan de mie crouton and almond tuile, both of which invitingly melt into the soup as it sits at the table.

Pastas all fit into the same yellow-green color scheme right now. The chicken chive lasagna with douglas fir ($15) was the standout on our visit. It sounds fancy, but it mostly mirrors the flavor profile of the chicken stroganoff you might have grown up with. Shards of braised chicken leg hide under layers of bechamel and house-made noodles with a garnish of fir and chives. See what I mean about familiar with an interesting, upscale twist?

We also got the night's special of abalone tossed with sweetbread croutons, only to have the server point out that the man who caught them was an investor's friend, sitting at the bar. On the way out, we stopped for small talk about the best abalone diving holes, amidst the chatter building around us.

All of a sudden it was 8 p.m. on a Monday night, and Rich Table's dining room had suddenly heated to a rolling boil, filled with diners following the buzz. The other crescendo happened at the table, thanks to some lovingly salted desserts. Panna cotta, shaved ice and chocolate sable all had a judicious saline edge, making them frighteningly easy to polish off.

The one my fork kept stopping at was a piece of cake made with Scabicca Sevillano olive oil ($8). The rectangular slice is pressed into sugar, then caramelized in a pan to order, and plated with roasted fresh strawberries, julienne of sorrel and housemade cream cheese ice cream. I've never had anything like it before, but somehow it tastes like home.