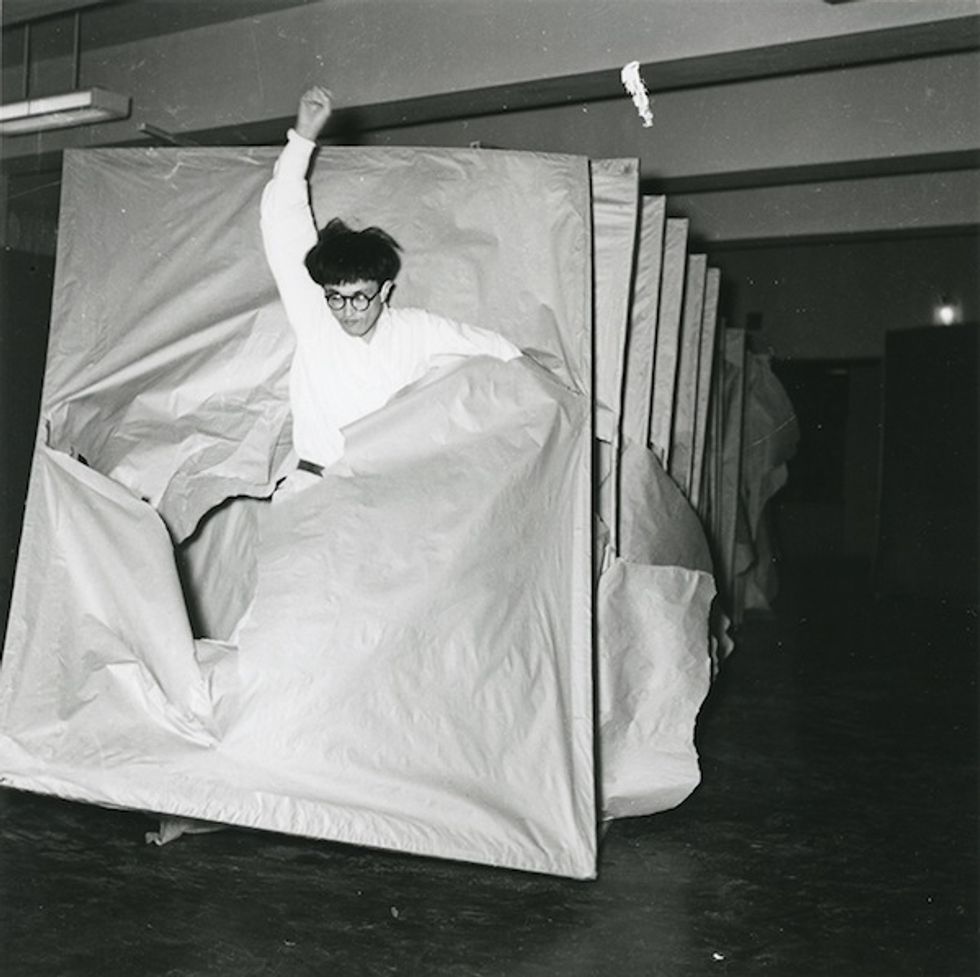 New galleries and emerging artists show work in SoMa, while the San Francisco Art Institute brings Gutai, an incredibly cool but underrecognized Japanese postwar artist collective, into dialogue with the present. Motorcycling and mud wrestling performances are on the agenda this week; don't miss out.

Those unfamiliar with Gutai are in for a treat. The name refers to a Japanese modern art collective that emerged in the 1950s – they were roughly contemporaneous with the American abstract expressionists and, on the surface, seemingly akin. The Gutai artists created abstract work that they threw their whole bodies into, throwing paint, smashing paint bottles, wrestling mud and leaping through sheets of paper. But the movement wasn't American; it had a distinctive Japanese and spiritual inflection.

This much-needed exhibition, curated by John Held, Jr. and Andrew McClintock, presents a number of original Gutai works in addition to a fascinating array of contemporary responses. Do not miss the opening reception, which will include live, site-specific performances reprising some classic, enervated Gutai pieces.

Alex Kanevsky; The Fox and the Hedgehog, at Dolby Chadwick Gallery

For his sixth solo show at Dolby Chadwick, Russian-born painter Alex Kanevsky draws inspiration from a peculiar yet strangely compelling aphorism: "the fox knows many little things, but the hedgehog knows one big thing." Kanevsky's rich, striking oil paintings provide glimpses of spaces and figures, often collapsing temporalities and fragmenting perspectives – effectively dancing between the fox's view and that of the hedgehog. Through this series, he hopes to visually illuminate the meaning behind the phrase.

The Fox and the Hedgehog runs from February 7 through March 2 at Dolby Chadwick Gallery, 210 Post Street. Opening reception: Thursday, February 7 from 5:30 - 7:30pm

The Looking Glass: Refraction through the Female Gaze, at Mirus Gallery

Seren Moran, an emerging Bay Area artist, exhibits a series of paintings inspired by a recent trip to Brazil. Vivid in color and often awry in perspective, sometimes to the point of geometric abstraction, the works capture an evocative ambience belonging to the South American country. "I see painting as being alive; it moves, in shapes and textures and depth," says the artist. "It can have energy or be calm, can be stubborn or unsure, or everything at once. And I view my paintings as accurate depictions of the images from which they are inspired."