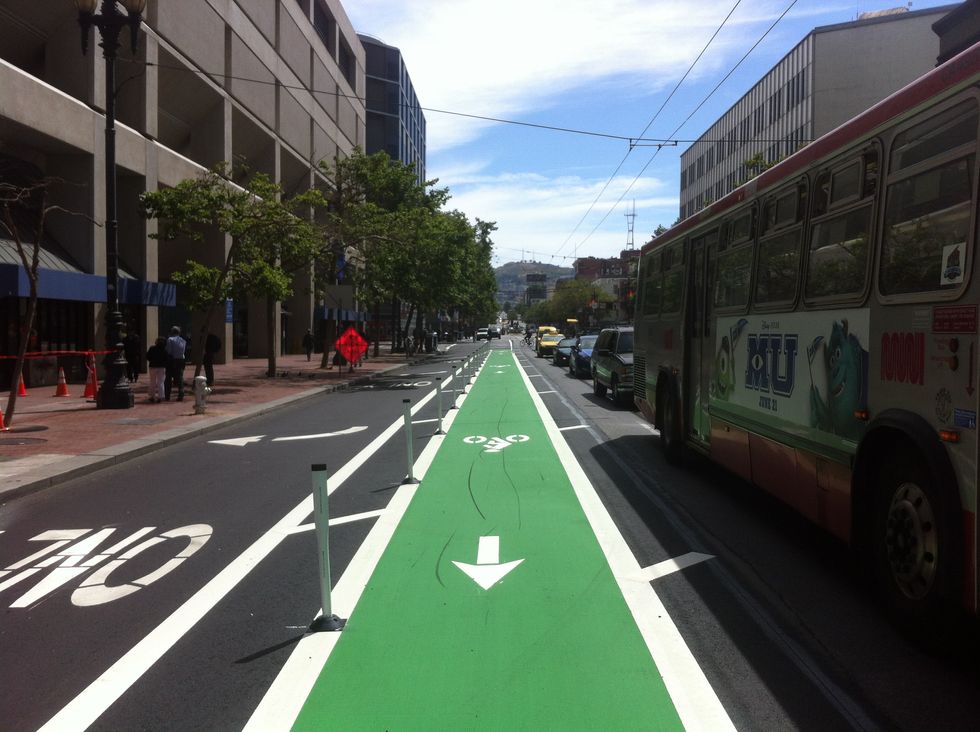 Five New Bike Projects to be Thankful for this Year

This year brought a lot of improvements to San Francisco streets—especially for the growing number of people biking in our city. From taming of dangerous, high-speed streets to smoother pavement on key bike routes to more bike timed lights, this year there is a lot for SF riders to be thankful for. Here are five of the top projects:

Market Street repaving: Our city’s busiest bikeway got fresh pavement and beautiful green bikeways this year, making for a much more comfortable ride for the thousands (yes, check out the bike counter at 10th St). Up next: the Better Market Street Project, which will hopefully include a separated, green bikeway the full way so you don't have to Frogger your way across Market.

All day bike access on BART: While this isn’t an on-the-ground change, this groundbreaking decision is big for bike riders on both sides of the Bay. This year, the Bay Area joined other cities like New York and Chicago in restricting bike access. You no longer have to avoid commuting at rush hour, leave your bike precariously parked in the BART station or feel like a criminal sneaking your bike on board at 5 p.m.

Fell and Oak Street Bikeways: The area between the bike-friendly Wiggle and Panhandle used to be a black hole of bike infrastructure. Families on their way to the park and daily commuters had to mix with freeway-like traffic. Now, there’s a wider bikeway with physical separation from the cars, as well as bike lights that give you a few seconds head start at the intersections. Up next: planters with trees that will replace the plastic posts.

More green waves: The City just approved five more green waves around San Francisco. On streets with green waves, the lights are timed at average bike speed, which allows people on bike to pedal more easily on a bike route and slows car traffic down as well. Valencia had the first wave, and now Arguello, Folsom, Fulton, and North Point are underway.

Folsom Street bikeway: After the death of Amelie Le Moullac on Folsom & 6th, the San Francisco Bicycle Coalition and bicycling community came together to demand a safer bikeway on this busy and dangerous route. The City stepped up and the new bikeway is underway now!