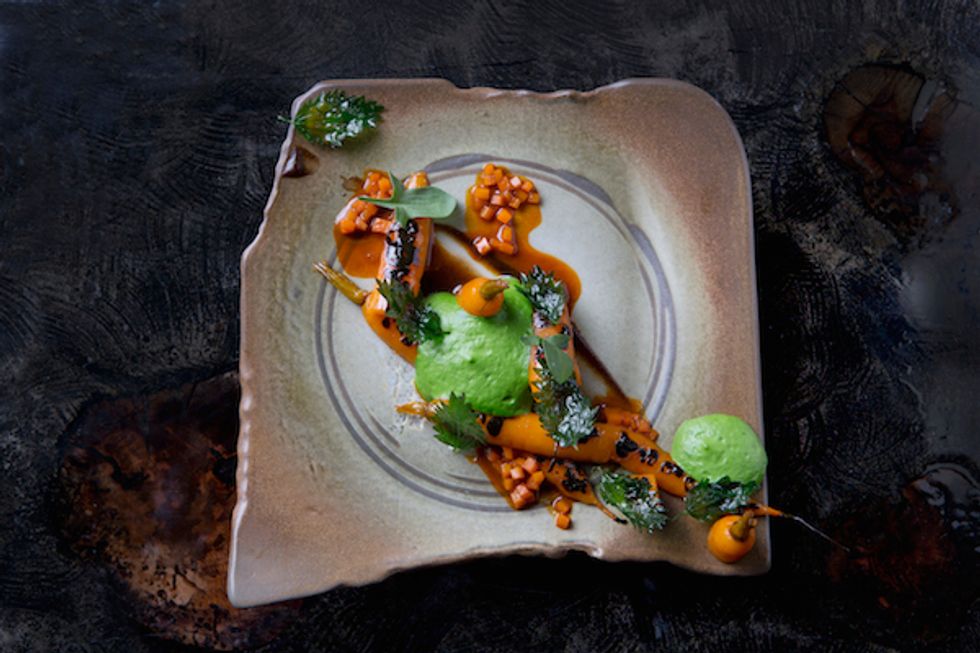 Five New Restaurants to Check Out This Month

Howdy. It’s a new year, with plenty of new openings to add to your dining to-do list. Since it can be hard to keep track of them all, here's your monthly cheat sheet of five brand-new places that recently opened around town. Go get ’em.

The Mid-Market area is ramping up, and the latest project from the Daniel Patterson Group is assuredly adding to the buzz. This casual spot is designed to appeal to all kinds of diners, whether it's providing a nourishing lunch to Twitter workers (the new office is just kitty-corner), to shaking up after-work cocktails (or have them at lunch, we’re not here to judge), to serving dinner late into the night. Chef Yoni Levy’s seasonally driven menu features everything from a memorable cracked wheat porridge topped with hen of the woods mushrooms to housemade pastrami and bialys, confit chicken leg, seared squid, and yes, there’s a burger. The late hours (until 2am) are already making it a pit stop for the restaurant industry crowd. 1420 Market St. at Fell, 415-590-2585.

The owners of the ever-busy La Ciccia in Noe Valley have opened an enoteca less than a block away, with a menu that is sure to be a welcome addition to the neighborhood. Let’s start with the three kinds of lasagna (mmm hmmm), plus they are making some inventive pizzas (like squid ink, fresh mozzarella, anchovies, sultanas, and pine nuts), and you'll also find 10 kinds of prosciutto. Cheeses, yup, those are definitely on the list as well. The contemporary space has room for 44, with a counter that seats a lucky 13. The name, which means “the fog,” offers a hint about the inspiration for co-owner Massimiliano Conti’s wine list: all the wines hail from the foggy regions of Italy—many are from small producers, clocking in at 30 selections by the glass. 1781 Church St. at 30th St., 415-874-9924.

Lovers of East Coast-style pizza will want to check out this latest addition to the pizza scene, now open in the former Frankie’s Bohemian Café space on Divis. Chef-partner Frank Bumbalo has partnered up with the neighboring Fishbowl owners (Kevin Kynoch and John Miles), a pretty symbiotic relationship since drinking and pizza go together like peanut butter and jelly. There are three kinds of pizza to consider: thin-crust New York (Neapolitan round) style, Sicilian style, and grandma pizza, an obscure style with roots in Long Island. The toppings are well-conceived, like the Frankie’s with sausage, rapini, garlic, onions, cherry peppers, and grande mozzarella. Whether you want to sit down for a whole pie with a wingman or just grab a slice, you can take your pick. The late hours on Fri-Sat are also worth noting: they’re open until 2:30am. 1862 Divisadero St. at Pine, 415-409-6672.

Ramen obsessives are heading over to get their tonkotsu on at this Southern California import that just opened in Japantown in the former Iroha. It sounds like the place is still getting its footing (service is reportedly a bit wobbly) and the room is a work in progress, but it's not stopping people from lining up to check it out. Pork lovers: be sure to get the pork belly add-on to your bowl, because hey, more is more. Open for lunch and dinner. 1728 Buchanan St. at Sutter, 415-359-9983.

The team behind Gather in Berkeley have crossed the Bay Bridge to open a stylish neighborhood restaurant in Russian Hill, taking over the former Marbella/Rex Café. Chef Sean Baker’s menu is so very California, fully stocked with plenty of vegetable-based dishes (six in all), alongside duck meatballs, quail, sardines, and other appealing plates, both small and large. There are also some bites that you can enjoy over a cocktail at the bar while admiring the illuminated wall of pickled items. The wine list has some gems (assembled by Michael Ireland, previously at French Laundry). This 58-seater is open for dinner nightly. 2323 Polk St. at Green, 415-441-2323.

A Tale of Two Irish Coffees: The SF Original, and the Trendy Frozen Twist