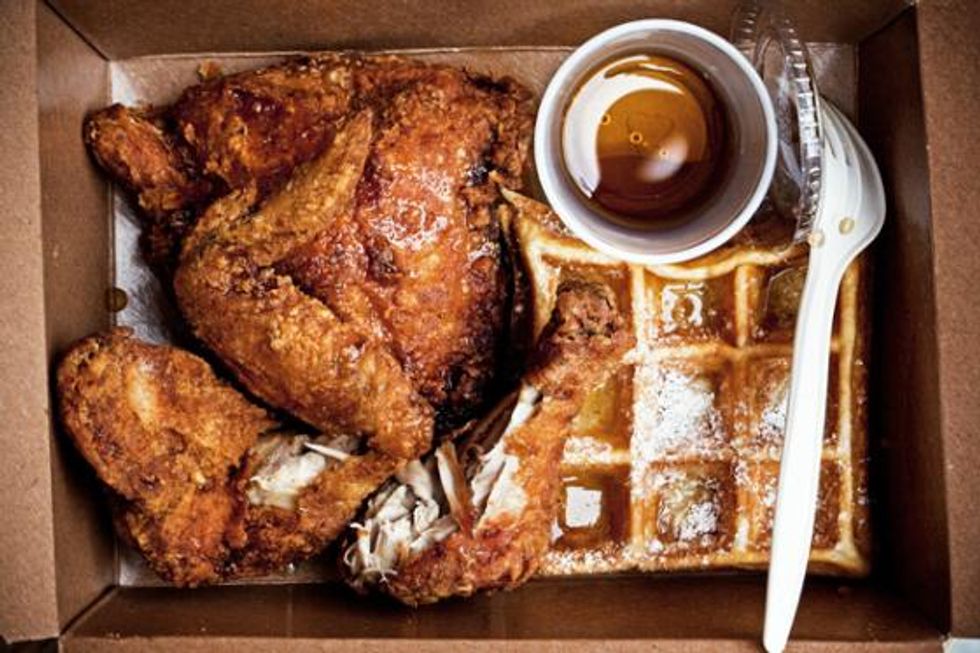 Five Renditions of Fried Chicken & Waffles to Feast On

Food doesn't get more soulful than fried chicken and waffles. Word has it that the combo surfaced in the Jazz days of 1930s Harlem, when after long evenings of crooning and jamming, late night diners wanted something to satisfy both their dinner and breakfast cravings. Fried chicken on its own is the ultimate in savory comfort–crisp, golden batter and moist flesh that bursts with the herbed flavor that can only come from a long brine. Add a spongy waffle to sop up syrup, and that sweet-salty combination is enough to inspire the liveliest of sax solos. Here are five places that serve a mean chicken and waffle–and there are curve balls!

Little Skillet
There's just something so appealing about eating fried chicken out of a cardboard box on a loading dock. Thankfully, Farmer Brown's Jay Foster knows this, and opened his small to-go window on Ritch Street in SoMa. Get your Little Skillet fried chicken and waffles from the stand on Ritch, and sit between clusters of diners on the loading dock (for your dining pleasure). Douse your crispy chicken and fluffy waffle in sweet maple syrup- but what makes the experience even better is a drizzle of their tangy honey-jalapeño hot sauce, with a growing heat that reminds you of its presence long after you've finished.

Gussie's Chicken & Waffles
An alumni of the famed Roscoe's Chicken and Waffles, Chef Michele Wilson makes her southern food at Eddy & Fillmore, where she fries up everything from chicken to catfish nuggets to chicken livers. You can order yours on top of regular, sweet potato, country cornmeal, banana pecan, or vegan buckwheat waffles.

25 Lusk
Here, Chef Matthew Dolan has an interpretation of the dish–chicken-fried quail and wild mushroom pancakes- that can't be left off our list. Dolan, who cooked in the South alongside Emeril, tenderizes their little quarters in buttermilk before frying, served with mini buttermilk pancakes, roasted maitake mushrooms, cipollinis, and thyme, finished with bing cherries and a dark cherry game sauce. Quail and mini-pancakes may sound tiny and delicate, but the flavor is grand.

Photo by Alexa Andrzejewski on Foodspotting

Straw
Oh Straw, we can always count on you for playful. Straw makes their rendition Monte Cristo style, with free range fried chicken sandwiched between two waffles, smothered in swiss cheese, raspberry jam, and a drizzle of syrup.

Urban Tavern
Why choose between fried chicken and eggs benedict? Deep in the heart of Union Square, Urban Tavern marries the two on a cheddar serrano waffle, with two poached eggs nestled on top, and a finishing bath of hollandaise. The best of all savory worlds.

Where is your favorite place to dig into fried chicken and waffles?