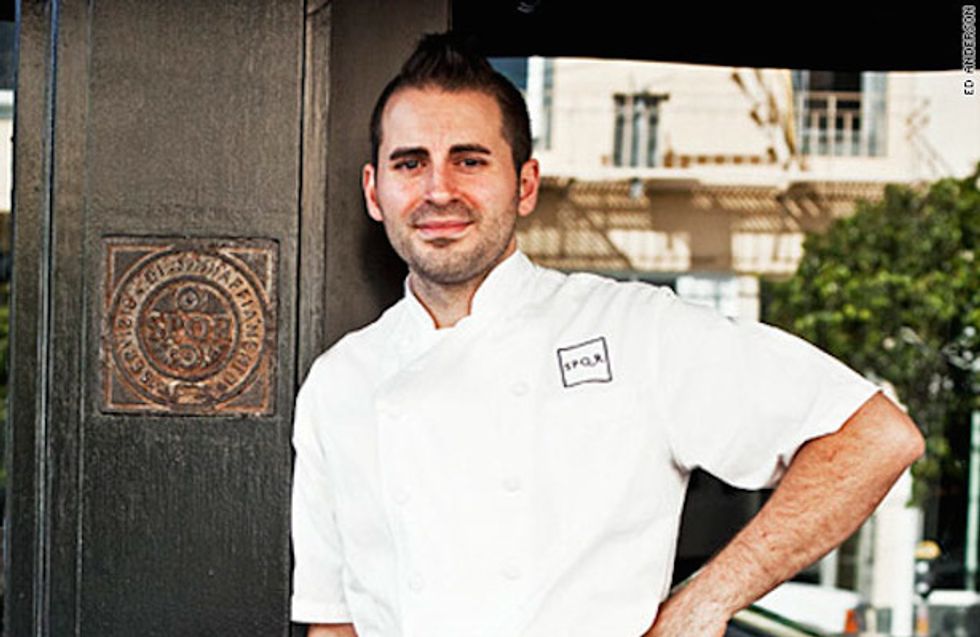 Food & Wine's Best New Chef Alums: Where Are They Now?

Last week, Food & Wine magazine unveiled their picks for the prestigious, annual Best New Chefs issue, and among this year's class of ten is San Francisco's own Matthew Accarrino, executive chef at SPQR. Accarrino has been at the helm of the Upper Fillmore restaurant for four years, and previously worked for Tom Colicchio – also a Best New Chef honoree from 1991 – helping to open Craft in Los Angeles.

Historically, the Best New Chefs honor tends to bring with it greater national attention and respect, and often new job opportunities and future deals to open one's own restaurant. A bevy of Bay Area chefs who have all gone on to great things have been honorees over the years, propelling their careers at a moment when they were still early in the game. Below, we look back at them all, and where they are now.

Though the two chefs are not related, they share a surname and both were among the magazine's first ever class of Best New Chefs in 1988. At the time, Thomas Keller was in New York serving refined French fare at a restaurant called Rakel, but he would ultimately relocate to California and buy The French Laundry in 1994, which earned the title Best Restaurant in the World from Restaurant Magazine in 2003 and 2004. He then opened his bistro Bouchon down the street in 1998, followed by Bouchon Bakery, and a second Bouchon in Las Vegas in 2004. Also in 2004, he opened the French Laundry sister restaurant Per Se in New York's Time Warner Center. He now also owns the family-style Ad Hoc in Yountville, as well as a Bouchon in Beverly Hills.

Hubert Keller was, as he is still, executive chef at Fleur de Lys, but over the last decade – along with his appearance on the first season of Top Chef Masters – he's expanded his brand to include Burger Bar both in S.F. and Las Vegas, and Fleur at Mandalay Bay.

Food & Wine found Danko at Chateau Souverain Vineyards in 1989, and it would be another 10 years before he would open his acclaimed, eponymous Russian Hill restaurant. He went on to win a James Beard Award for Best Chef in the West for his style of French-California food, and he had plans for a brasserie in Ghirardelli Square several years ago, but those have yet to come to fruition.

The husband and wife team of Hiro Sone and Lissa Doumani won raves as far back as 23 years ago for their St. Helena restaurant Terra, which is still going strong under their care. In 2012, they split the space into two sides, creating the more casual Bar Terra. And since 2006 they've been operating the Michelin starred Ame at the St. Regis Hotel.

Chef Nancy Oakes won early acclaim for her work at L'Avenue before teaming up with restaurateur Pat Kuleto to open Boulevard, which happened the same year she landed in F&W. In 2010, she and partners Kathy King and Pamela Mazzola opened Prospect, which has remained one of the most popular restaurants in town these past few years. Boulevard, meanwhile, took home the James Beard Award for Outstanding Restaurant in the nation in 2012.

Basque chef Gerald Hirigoyen won great acclaim, and the F&W honor, during his tenure at Fringale. He went on to open Piperade in 2002, and to win the James Beard Award for Best Chef in California in 2006. He also owns and runs Bocadillos, the popular FiDi tapas bar.

Back in the mid-90s Traci Des Jardins was executive chef at Rubicon, the high-profile Financial District restaurant that came from a partnership between Robert DeNiro, Francis Ford Coppola, and Robin Williams. After her Best New Chef honor, she went on to open her own restaurant, Jardiniere, in 1997, and she now owns and operates two locations of her taqueria concept Mijita, as well as Public House at AT&T Park. This year, she'll be opening yet another restaurant in the Presidio, The Commissary.

Chef Daniel Patterson now has worldwide attention for his ultra-refined, modern style of cooking, and his North Beach restaurant Coi holds two Michelin stars. He was working at Babette's in Sonoma when Food & Wine came calling, and he's gone on to become a mini-mogul with four more restaurants to his name: Plum, Plum Bar, and Haven in Oakland, and the recently opened Alta CA on mid-Market.

McBride was part of the early staff of Judy Rodgers' Zuni Cafe, and broke out on her own to open the charcuterie-driven Cafe Rouge in Berkeley, where she remains today. The restaurant is now in its 18th year.

The current executive chef at Michael Mina, Ron Siegel has moved around to several of San Francisco's fanciest kitchens. He was cooking at the defunct Charles Nob Hill back in the late 90s, ultimately taking a job with Mina at Aqua and then becoming executive chef at The Dining Room at the Ritz-Carlton.

Stoll created an instant hit when he and his wife Annie opened Delfina in the Mission in 1998. He went on to win the James Beard Award for Best Chef in the West in 2008, and he's of course the proprietor of several restaurants now, including Pizzeria Delfina (now with its third location just opened in Burlingame), and the Roman-inspired Locanda.

The acclaimed State Bird Provisions chef was cooking at a small fine dining restaurant, Tapawingo, in deepest, northwest Michigan when he got the nod from Food & Wine eleven years ago. That attention would help propel him back to the Bay Area, to take over the kitchen at Rubicon alongside pastry chef Nicole Krasinski, to whom he's now married, and with whom he later opened the brilliantly dim-sum-style State Bird on New Year's Eve 2011. The rest is history -- landing on Bon Appetit's list of Best New Restaurants in 2012, multiple honors in multiple magazines, and winning the James Beard Award for Best New Restaurant in the country last year. He and Krasinski expanded the restaurant last year by a few seats, it remains one of the toughest tables in town to get (reservation bots be damned), and they plan to open a second restaurant next door, The Progress, which should open later this year.

Perello worked with Ron Siegel at Aqua before joining him and taking over the kitchen at Charles Nob Hill, which is where she caught the attention of Food & Wine ten years ago. She would also land in the kitchen at Fifth Floor before ultimately, in 2009, opening her wildly popular restaurant Frances. She's hinted at spinoff plans in the last couple of years, but nothing has come of that yet.

The former executive chef at Cyrus, which held two Michelin stars before it closed due to a landlord dispute in 2012. Keane remains a partner in Healdsburg Bar & Grill, and had a short-lived chicken-wing concept that quickly closed at the Graton Resort and Casino in Rohnert Park earlier this year. His next steps are still to be announced.

Having recently taken over the kitchen at the Restaurant at Meadowood and previously bringing a Michelin star to Chez TJ in Mountain View, Kostow was named a Best New Chef in 2009. Within two years, he earned three Michelin stars for his work at Meadwood, becoming only the second American-born chef ever to do so, after Thomas Keller.

After four years without any Bay Area representation on this list, Oakland's James Syhabout landed in the magazine for his small, very sophisticated Piedmont Avenue restaurant Commis–  which also won Oakland its very first Michelin star. Syhabout has expanded with the casual Hawker Fare, and last year with Rockridge gastropub Box & Bells. This year he's teaming up with Linden Street Brewery to open The Dock at Linden Street, in West Oakland.

Landing in Food & Wine was a boon for chef Joshua Skenes, who just two years earlier had opened Saison with partner Mark Bright as a three-night-a-week pop-up behind The Stable Cafe in the Mission. The restaurant, which soon became full time and relocated to a larger space in SoMa in late 2012, now holds two Michelin stars and has won raves from many corners, including the New York Times' Pete Wells.

Though he's technically now a New York chef, Mission Street Food/Mission Chinese Food's Danny Bowien got his start here in San Francisco, and remains ostensibly the executive chef at his flagship restaurant. He won the James Beard Rising Star Chef honor the same year he landed in Food & Wine, and he recently opened Mission Cantina in New York –  and may have plans for more locations of Mission Chinese Food.

Calling him "the mad genius of handmade pasta," the magazine bestowed their praises on SPQR's chef this year. He earned his first Michelin star for his work at the restaurant in 2012, and continues to dazzle fans with his unique, contemporary take on northern Italian ingredients and flavors. With restaurant owner Shelley Lindgren, he co-authored the beautiful SPQR cookbook that year, as well. As he discussed with 7x7 not long ago, he keeps things fresh in his kitchen by adding at least five new dishes to the menu every week. "I always say menu items have a life span," he says. "First they are new, then they're current, and finally they either become parts of new ideas for the immediate future or something I file away until they find a way to reinspire me."

* This post has been corrected to include Stuart Brioza, who was not a Bay Area chef when he won the honor, but who quickly returned to much acclaim.