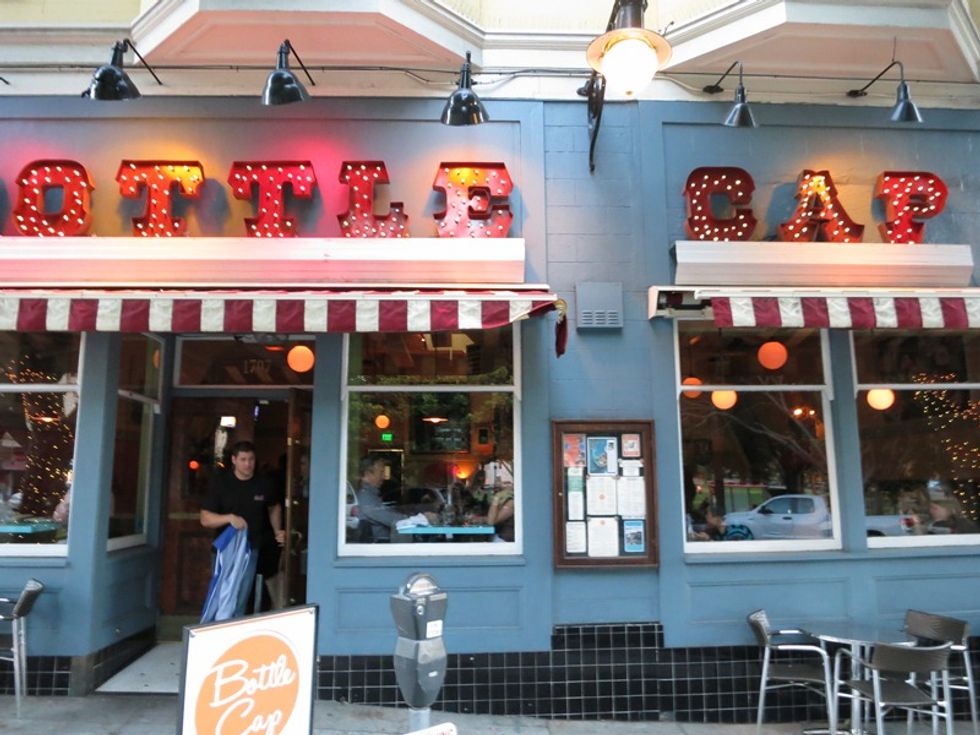 In this week's restaurant news, we have the closing of a two-year-old spot in North Beach, the impending opening of the food hall in the former Red Vic in the Upper Haight, and a chef shuffle at Russian Hill's Seven Hills.

The biggest item of the week: Two-year-old Bottle Cap, in the famed former Washington Square Bar & Grill space on Washington Square Park, is calling it quits on December 22. Though it's across the street from the ever-popular Park Tavern and actually opened some months before them, the place never garnered a ton of attention, and now taking over the space will be the Sons & Daughters team of Matt McNamara and Teague Moriarty, who have already expanded once with the casual takeout spot Sweet Woodruff. They're keeping details close to the vest, but look for their new concept to arrive by spring. [Inside Scoop]

There's been a chef shuffle at Seven Hills, the little Italian bistro in Russian Hill opened two years ago by chef Alexander Alioto of the Alioto clan and partner Alexis Solomou. As Tasting Table reports, Alioto has gone off to pursue his own project, and Solomou remains with new chef Anthony Florian, who's worked in the kitchens of Quince and Bar Bambino. [Tasting Table]

Up in the Upper Haight, the former Red Vic theater is within weeks of opening as Second Act, a multi-use community space and food hall along the lines of 331 Cortland in Bernal Heights, but with more gathering room. They're aiming for a mid-December opening, and tenants include Anda Piroshki, RAW juice bar, and High Cotton Kitchen, a neighrborhood marketplace and takeaway joint serving hot lunches and dinners with some New Orleans flair. [Uppercasing]

We neglected to mention the opening of small French brasserie Nico (3228 Sacramento Street) in Laurel Heights, which just opened its doors three weeks ago. The spot's been in the works for over a year now, and the owners are married couple Nicolas and Andrea Delaroque. Nicolas (Nico) was born in France and has worked in the Bay Area at Le Garage in Sausalito and L’Appart in San Anselmo, as well as stints at Manresa, Atelier Crenn, and Coi. The reasonably priced menu features some intriguing items including a rock cod "fromage a tete" (head cheese?), salsify soup with brown butter, and a leg of lamb served with butternut squash, panisse (chickpea flour cake), and kohlrabi. [Tablehopper]

Over in Berkeley, Sierra Nevada just opened their beer bar The Torpedo Room at 2031 4th Street serving 16 different house brews that can be enjoyed in flights or pints or taken home in growlers or six-packs. [Eater]

Last weekend was the annual Flavor Napa Valley festival at the Culinary Institute of America's Greystone campus in St. Helena. Many noted chefs from around the country gathered to give demos and talks, and Inside Scoop has some photos.

Also up in Napa, in the former Ubuntu space in downtown Napa, Torc just had its debut. It's a restaurant from former Quince and Cotogna chef Sean O'Toole, and the internationally influenced dishes include violet-artichoke soup with chanterelle mushrooms; a selection of pastas like duck agnolotti with black trumpet mushroom; heritage pork with cheddar grits and collard greens; and roast chicken for two with black spice, coconut rice and spicy bok choy. See the menu here. [Eater]