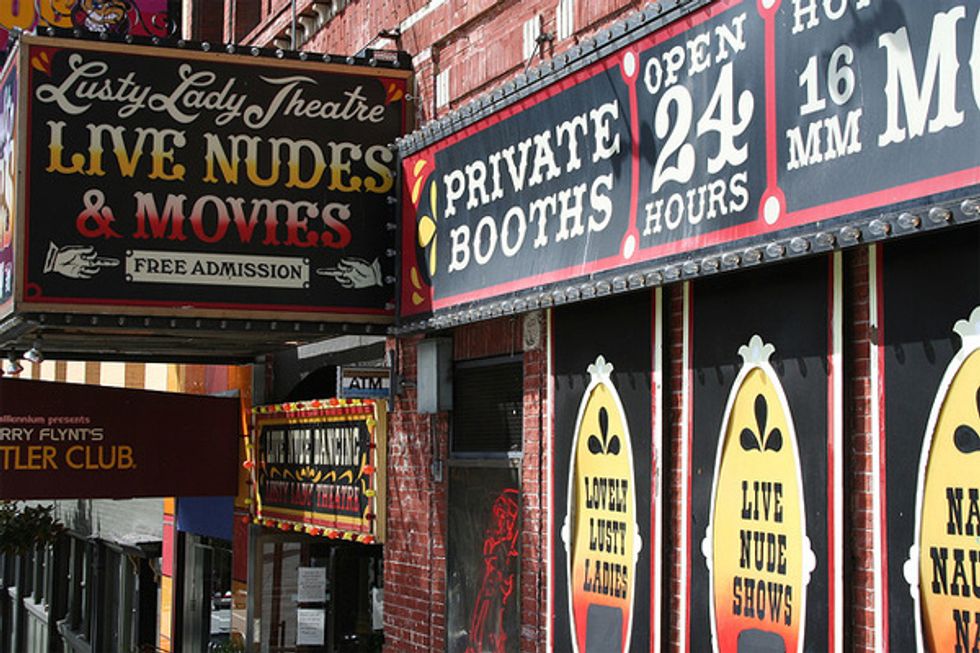 The big news item of the brand new year is the takeover of the former Lusty Lady space in North Beach by the team of Ken Friedman and April Bloomfield, marking their second west coast project in eight months. Also, Little Skillet has expanded into the next-door space with Victory Hall, and B-Side BBQ in Oakland is moving to Uptown.

The Tosca team of Friedman and Bloomfield are going to be opening a new, as-yet-unnamed cocktail spot in the former stripper-owned strip joint The Lusty Lady. As Friedman tells Inside Scoop, "We’re going to do a cool little bar that hopefully will pay homage to what the Lusty Lady was -- the peep show parlor, the wonderful seediness, and the dying breed of seediness." The Lusty Lady and Tosca share a back wall, and both are owned by the same landlord, so the deal ended up being pretty easy. Look for the place to open in the second half of 2014. [Inside Scoop]

The old-timey, cozy E'Angelo Trattoria in the Marina is shuttering after 35 years on January 15. It was owned from 1978 to 2003 by Ezio Rastelli, who originally wanted to call it Ezio E Angelo (Ezio and Angelo), but Angelo backed out just as half the signage was complete, and he couldn't afford to change it. It's unclear what's next for the space. [Inside Scoop]

Over in SoMa, Little Skillet is finally ready to open their epansion in the former 330 Ritch space next door, and it's called Victory Hall. It debuted on New Year's Day, and it features all of Little Skillet's menu favorites (fried chicken, po boys, waffledogs) alongside a casual cocktail bar. [Inside Scoop]

Tired of being a pioneer in a farflung corner of Oakland, Brown Sugar Kitchen owner Tanya Holland is relocating her BBQ concept, B-Side BBQ, from its current location to 18th and San Pablo Avenue. [SF Business Times]