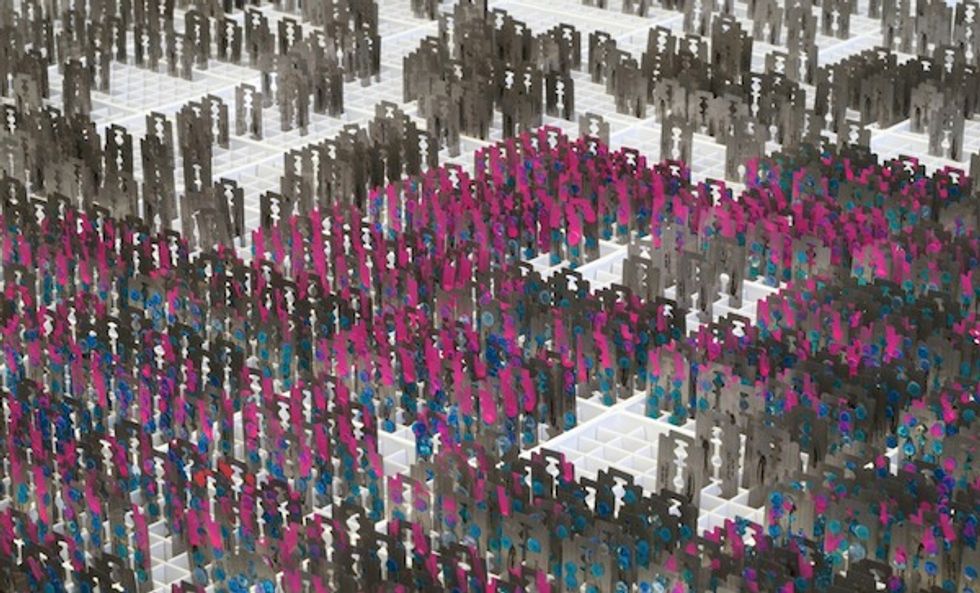 Four Art Gallery Openings to Ring in the New Year

For the sake of conversation, let’s say that “visit more art galleries” is on your list of New Year’s resolutions. Well hey, now is a fantastic time to make good on that: after a holiday lull, the local art scene is poised to ring in 2013 with some fascinating exhibitions. We recommend these four, which range from representational to abstract painting, 19th century photography to postmodern multimedia.

The Unphotographable, at Fraenkel Gallery

One thinks of photography as built for capturing only the material appearances of reality – its light, edges and objects; immaterial things like thought, time, ghosts, god, dreams remain outside the camera’s sights. But in fact, dating back to the medium’s invention, there has been a tradition of photography that believes the contrary. This expansive exhibition, including work from heavy hitters including Diane Arbus, Jay DeFeo, Man Ray, Gerhard Richter, Alfred Stieglitz and Hiroshi Sugimoto, rounds up such attempts to photograph the ostensibly unphotographable.

The Unphotographable runs through March 23 at Fraenkel Gallery, 49 Geary Street.

On a literal level, Jungsan Senim’s works consist of an odd medley of objects: razorblades, matchboxes, nail polish. Each possesses a rich valence of emotional associations as wells as physical sensations and smells. But it is at a still greater degree of remove that Senim, whom the gallery describes as “a multitalented monk, chef, and artist,” describes his work. His language is one of music (the objects are arranged and colored like a score, possessing certain rhythms and harmonies) and of deep-seated spirituality.

In this striking series of large paintings, Irish artist Eamon O’Kane depicts the seductive and at times strangely situated structures of modernist architecture, in particular those belonging to Neueus Bauen (New Building), the seminal European movement of the 1920s and 30s, and “Desert Modernism,” the iteration that followed in places like California’s Coachella valley some decades later. In exploring the unique relation between structure and nature, space and place that these buildings set up, O’Kane opens a fascinating dialog between the worlds of architecture and visual art.

Amy Trachtenberg: From India to the Planet Mars, at Brian Gross Fine Art

Amy Trachtenberg’s large scale paintings, which she creates by staining and pouring pigment while lifting, swaying and tilting canvas, espouse a pure form of abstraction: “the work does not ask to be understood or categorized with any particular meaning or theme,” says the artist. “Despite the associations or experience that generated them, each piece follows it’s own language and logic for an open-ended reading." The approach has caught the attention of collectors as well as public organizations like BART, which has commissioned the artist for an integrated piece to form part of the planned Oakland-San Jose extension. In this show, she presents paintings, collage and mounted sculpture.