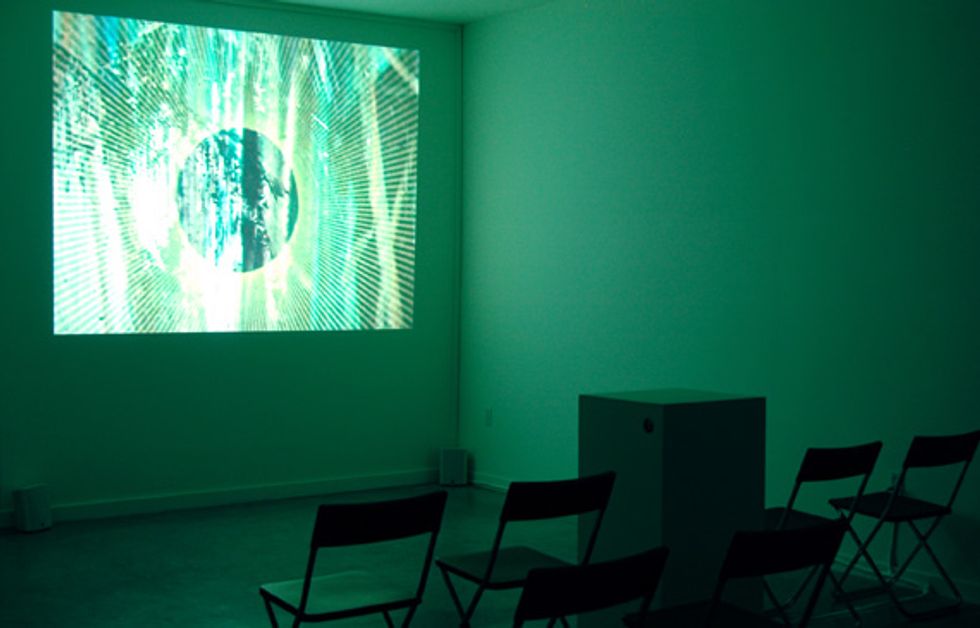 It’s that time of year, and this week a host of vibrant city galleries are getting in the holiday spirit (well, only one of them in an explicit sense, unless you count wacky Dutch New Wave film screenings and existential meditations in graphite as “the holiday spirit”). For casual art lovers as well as aspiring collectors with year-end bonuses at their disposal, we’ve rounded up this week’s four most promising openings.

Projections: 5 Nights/5 Curators
Romer Young Gallery’s film series (pictured above) is underway, offering five curators’ choice selections – distinctive reels that you’d be hard-pressed to find anywhere else, any other time. Tactfully passing over the question of what separates “art-film” from the stuff you’d catch at the Kabuki, we recommend the following sampling:

Tonight, Romer Young curates a selection of its own artists’ video work. You’ve seen their painting, collage, sculpture, installation and photography; now, see what they can do on the silver screen. Tomorrow, curator Glen Helfand selects Daisies, a madcap Czech film banned upon its original 1966 release. Expect plenty in the way of liquid eyeliner, political satire and, yes, a boozy gourmet food fight.

It’s been a good year for Sandra Lee Gallery, and they have decided to end it with a veritable highlight reel of 2011’s best work, by their own gallery artists as well as featured guests.

The gallery has devised the show with casual art-lovers as well as young collectors in mind, selecting works that will provoke juxtaposition and complimentary readings, and also bringing out pieces that wear a price tag in the relatively affordable, $200 - $2,000 range. Did we mention that champagne and live music have been promised at the opening reception? Just in case you were still on the fence.

The saying “art is a window into the soul” takes on new meaning in an age where windows are something you double-click to open. With “New Document,” prominent downtown Oakland gallery Johansson Projects gives the stage to four artists exploring the question of a generation (or two): how does our increasingly computerized environment affect the way we not only make art, but see the world?

“Layering,” “cropping” and “rendering” don’t mean what they did fifty years ago. This group show, incorporating art-methods and media ranging from the ancient (brush strokes) to the modern (video compression and 3-D rendering), promises to put our ever-expanding “visual literacy” to philosophical work.

This UK-born, now Oakland-based artist does not skirt the heavy stuff. Sometimes drawing from old family photographs or found images, sometimes starting from purely symbolic ground, Loftus broaches issues including, but not limited to, fear, obsessiveness, and the concept of the inevitable. And just in time for the holidays.

In seriousness, though, Loftus is renowned for his meticulous, photo-realistic graphite process as much as his conceptual courage. It’s a style that captivates in and of itself, making this is a show for deep thinking and close-viewing.