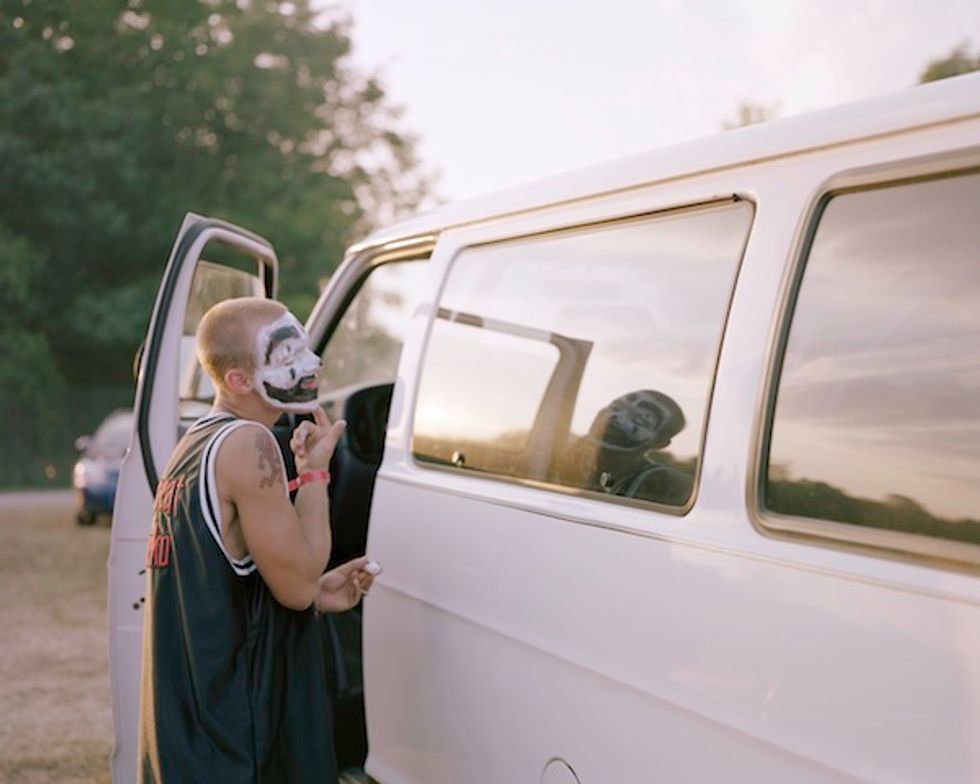 Christian Marclay's lesser known photography bent, a full-scale house of cardboard, unpredictable robotic sculptures and a sustained look at The Gathering of the Juggalos are all on the art agenda for this week. Curiosity? It's most certainly piqued.

Daniel Cronin, The Gathering of the Juggalos (Artist Talk and Book Signing), at Carte Blanche

Called "the most controversial music festival in the world," The Gathering of the Juggalos is indeed, as photographer Daniel Cronin shows, a sight to see. For the unfamiliar, Juggalos are a predominantly midwestern, white trash subculture distinguished by their black-and-white clown makeup and devotion to the "horrorcore" rap group Insane Clown Posse. However, in Cronin's new book documenting the festival, the daring photographer aims to suggest that there is in fact a current of goodwill and camaraderie beneath all the nastiness. Not convinced? Come to Cronin's artist talk at Carte Blanche for what is sure to be an unforgettable first-hand account.

This April through May, Christian Marclay's phenomenal The Clock, a twenty four-hour film consisting of thousands of film clips that reference time, will be on view at SFMOMA. Timed to accompany this exhibition, Things I've Heard at Fraenkel Gallery presents a unprecedentedly substantial look at Marclay's photography, one of the artist/composer's less discussed but nevertheless fascinating pursuits. Marclay's snapshots often serve as source material for his projects in other media, but succeed as standalone works as well. Typical of Marclay's singularly interdisciplinary practice, they all reference sound in one way or another.

For his debut solo exhibition at McLoughlin Gallery, Venezuela-born artist Cristóbal Valecillos constructs a full-scale model of a standard American house made entirely of cardboard. Valecillos, who is currently based in Los Angeles, typically uses photography to capture the cultural amalgamation that is American society, and cardboard often plays a role in these images, perhaps suggesting a kind of poverty or ephemerality about his theme. With this grand installation, he takes matters a step further. "Pushing through cardboard doors, visitors will be immersed into a transient existence," the gallery promises.

A pioneer of electronic art since the 1980s, Alan Rath creates moving sculptures that, as Hosfelt Gallery puts it, "refuse to mind their manners." Essentially robots that have been rendered animal-like, sometimes even human, with the adornment of pheasant and ostrich feathers, Rath's creations move about according to open-ended algorithms. That means they are each unpredictable to a degree, so engage them at your own risk. Falling somewhere between the aesthetic of headdress-wearing ceremonial dance and Little Shop of Horrors, the robots exude distinct personalities and, sometimes, sexualities. Thus, Rath puts a devious twist on the famous Ad Reinhardt quote, "sculpture is something you bump into when you back up to look at a painting."