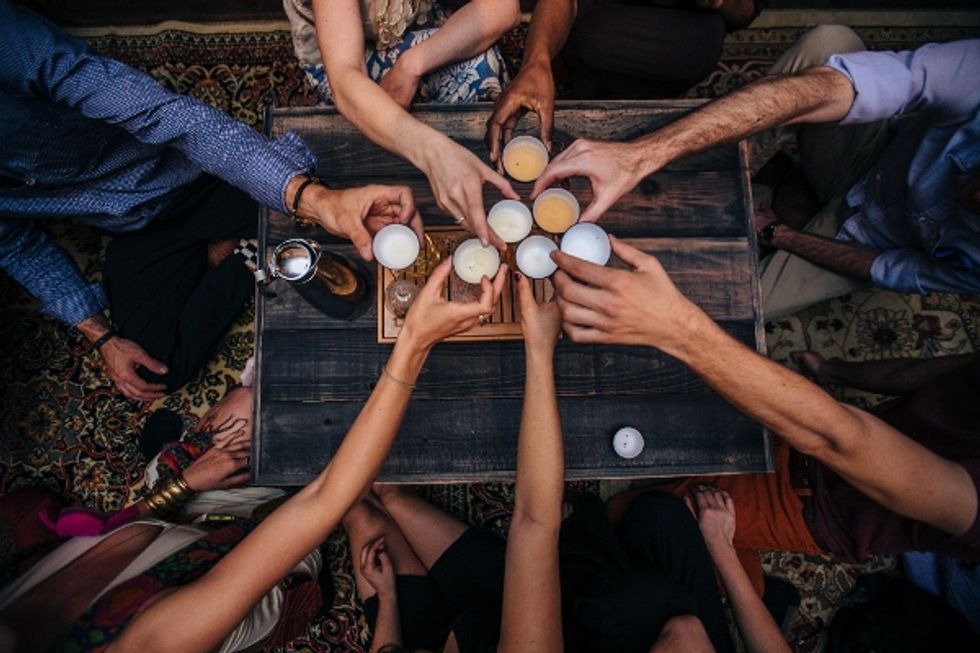 Telecommuting is awesome. But as working from home becomes the norm, social life can fall by the wayside. In Oakland, a new crop of multifunctional spaces are combining housing and office space with shops and social spaces to keep folks connected, not to their devices, but to other humans.

Opened this past March by Open Door cofounder Jay Standish, the Blueprint is an interactive space that devotes the front half of its building to workspace—with fold-down desks, a small kitchen, and a swing for, you know, fun—that also doubles as an events venue: An open house last month included presentations from partners including Localwise and Ubuntu Theater Group; the desks were folded up to expose chalkboards on the undersides with questions prompting visitors to discussion.

At the back, a cozy, carpeted space with mismatched cushions and chairs is the yin to the office's yang. This is the Tea Oasis, a digital-free and alcohol-free zone designed as a refuge from work and a place to chat and meet new friends.

A group of 12 entrepreneurs and creative types reside in the Canopy housing space upstairs.

Day passes and memberships are available for both the Blueprint and the Tea Oasis.  //  The Blueprint, 439 International Blvd., blueprintoakland.com.

"These types of spaces are important for the community, because they build, strengthen, and bridge communities," says Oakstop founder Trevor Parham, who didn’t let a lack of funds stop him manifesting his vision for a space for creative professionals.

The two-year-old, two-story coworking space is home to some cool creatives, including fabrication and laser cutting company Oaklabs; Monstro Animators; and resident artist James Gayles. The venue also acts as a gallery, with art-lined walls throughout, and it is open for events, including Oakland’s First Friday Art Walk.

"Oakstop is creating an accessible and inspiring environment for local artists and local businesses to grow with Oakland," Parham explains. "Providing space for business and art keeps Oakland rooted in its culture while nurturing its growth as a city."

Day passes and memberships are available, and conference rooms and event spaces are open for rental.  //  Oakstop, 1721 Broadway, oakstop.com.

The second wave of businesses has recently moved into the Hive, the multiuse community that opened in September 2014 and will begin leasing 96 walk-up apartments starting this month.

A project of Signature Development Group, the Hive brings together retail, business, and living in one central hub, with brands including Oakland-based Numi Tea, new Mexican kitchen and agave bar Calavera, and Firebrand Artisan Breads and Red Bay Coffee, both coming soon.

The Impact Hub, a coworking space with locations in Berkeley and L.A., facilitates connections between the various businesses and individuals.

“We designed the Hive to be community-oriented. We have a lot of local businesses here and spaces for people to hang out and congregate and socialize. That was a missing gap in a lot of real estate developments,” says Mike Ghielmetti, president of Signature Development Group.  //  The Hive, 2335 Broadway, hiveoakland.com