We rolled through Napa with Gwyneth Paltrow—here's what happened

On Saturday, March 3rd, I attended Road to Table, a private event hosted by Gwyneth Paltrow and Goop. After a few glasses of vino and a meal prepared by a Michelin-starred chef, here's what went down.

First things first: What does one wear to meet Gwyneth Paltrow? After trying to decipher a dress code described as "some form of casual cocktail attire" and keeping the rainy forecast in mind, I settle on black—slim black sweater, black kick-crop pants, and black booties. For most of the day, though, my footwear is irrelevant; all 50-ish guests are encouraged to change into navy Hunter boots, which greet us as we enter the gorgeous gallery room at Turnbull Wine Cellars for an afternoon tasting. The chic clodhoppers (is that an oxymoron?) did, in fact, make for worry-free traipsing around the Oakville winery's idyllic (and wet) grounds.

Before landing mid-afternoon in Napa, we (my bestie Betsy is along for the ride) have already experienced the "road" portion of the program. It began around 11am when a shiny 2018 Cadillac CT6 Sedan (Cadillac is the sponsor of this whole shindig) rolls up to Betsy's Mill Valley home. Jess Sylvia, the Caddy's delivery woman, points out the car's bells and whistles, the Goop swag bags in back, and then bolts. A peek inside the bags reveals a couple of bottles of water, healthy snacks (that homemade trail mix!) and other treats à la G.Nite Bedtime Bath Soak and Le Spec sunnies.

The wheels are ours to drive to Napa, but once we arrive at the winery, the keys go to the valet and, voilà, our driving duties are dunzo. (From that point on, we're chauffeured everywhere, leaving us free to imbibe.) After a pit stop at Peet's—for iced three-pump-vanilla lattes—we hit 101 N., and the road trip begins in earnest. The traffic is light, the ride is smooth and the laughs are plentiful. Bets and I catch up on kids (hers) and work (mine) and speculate about how involved Gwyneth will be in the events to come. (Hint: very.)

For moi, the first hour at Turnbull is all about mixing and mingling while enjoying generous pours of the winery's Josephine Sauvignon Blanc and nibbling on delicious bites, including farm eggs with olive oil and sea salt, and little gem lettuces with smoked and dried albacore with herb cream (mouthwatering emoji).

Suddenly, it's toast time, and I spy the Gooptrix herself. Gwyneth looks exactly as she does in photos—beautiful, with natural makeup and shiny hair. She's clad in a cozy black turtleneck, pink floral midi skirt, and sleek black boots…so that's what casual cocktail looks like. Everyone gathers round and she gives a short speech about Road to Table and "foodie adventures." She also thanks Christopher Kostow, chef at The Charter Oak and The Restaurant at Meadowood (bearer of the aforementioned Michelin stars), and Zoe Johns, president of family-owned Turnbull Wine Cellars, known for its cabernet sauvignon. 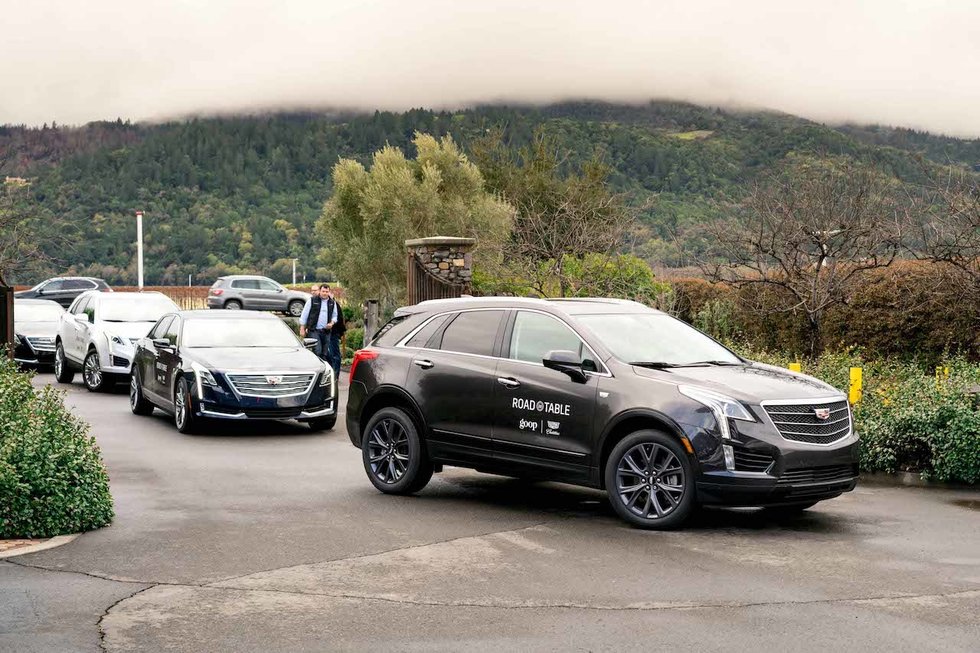 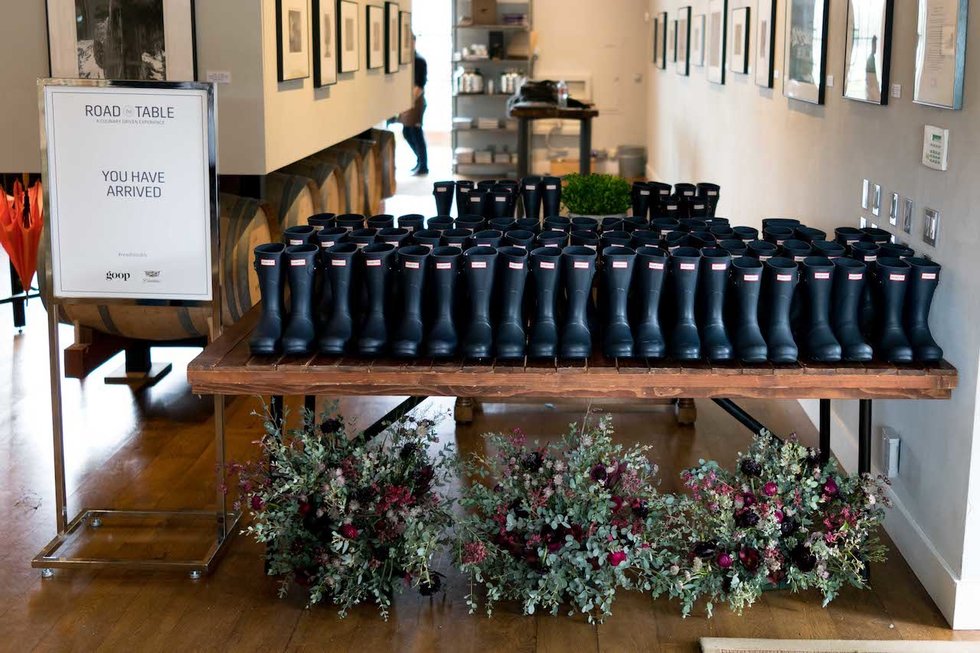 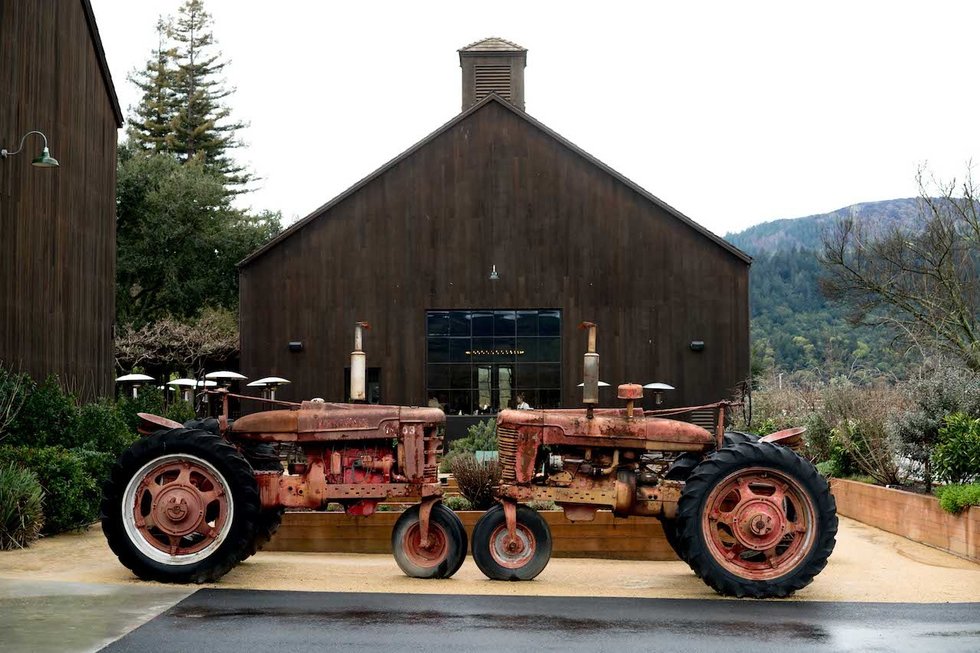 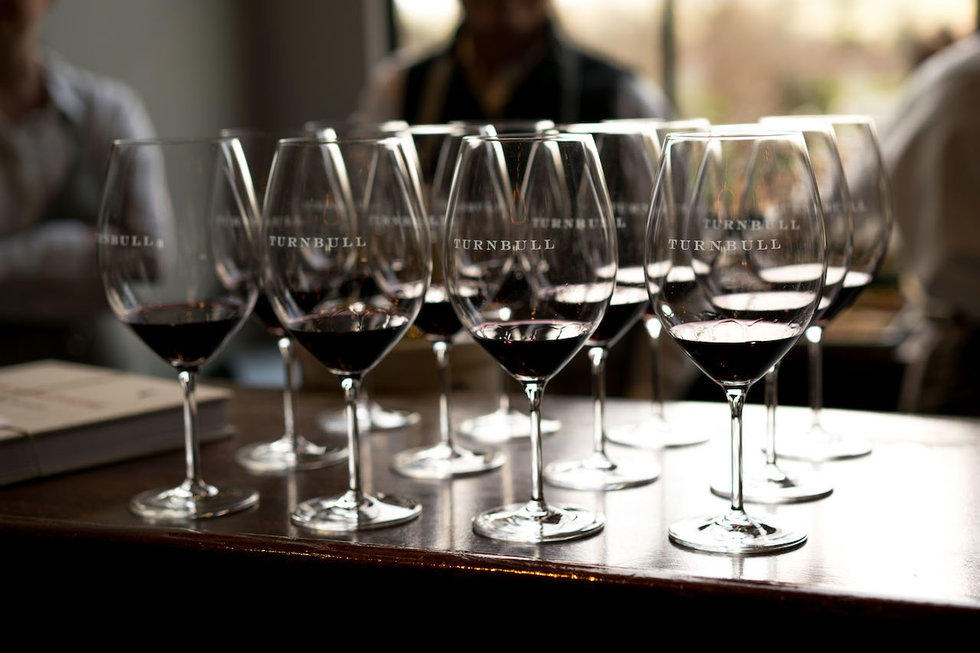 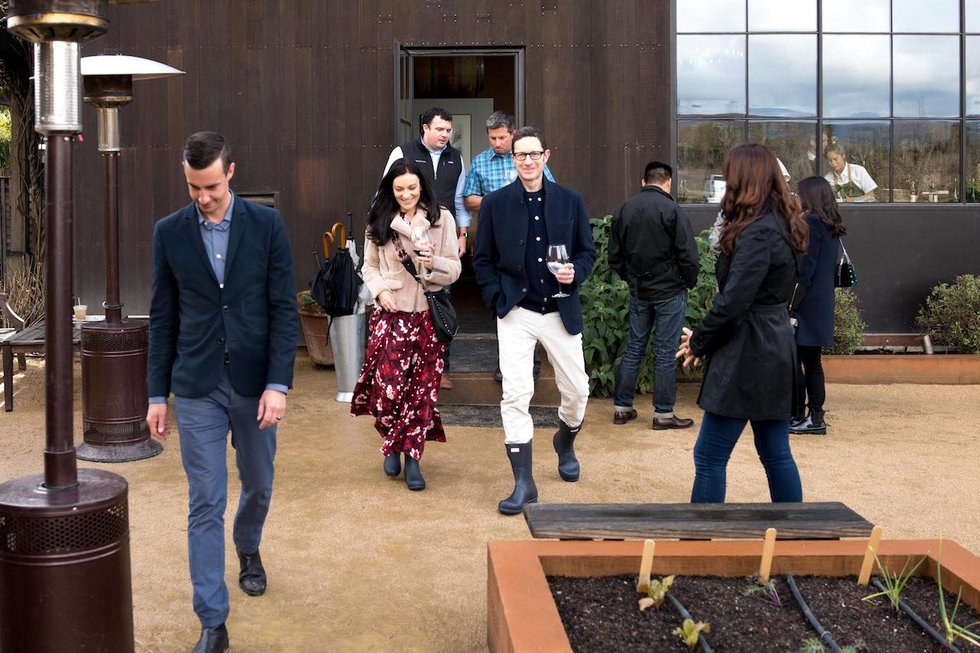 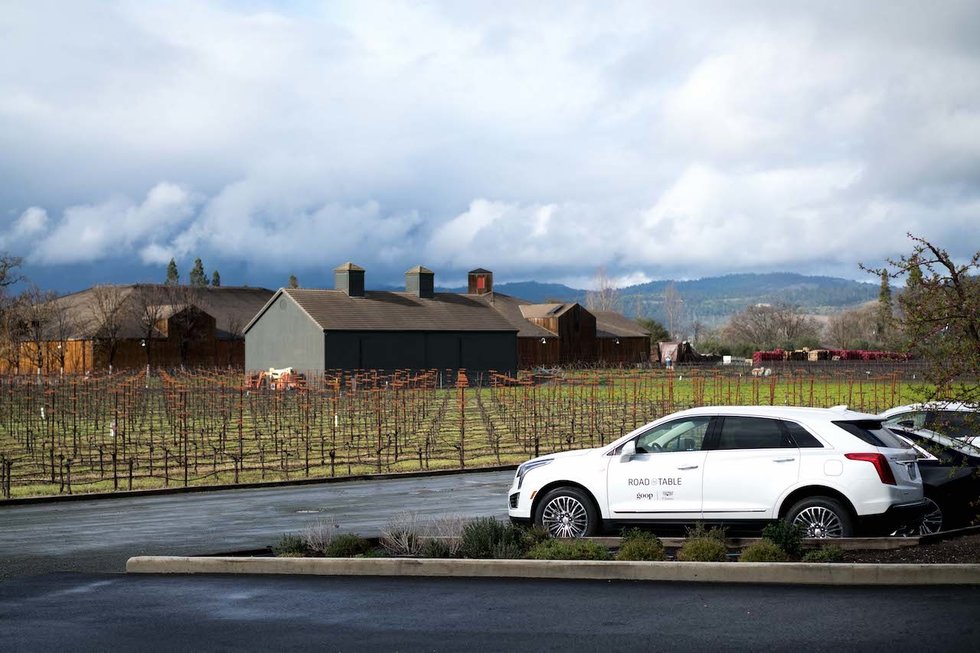 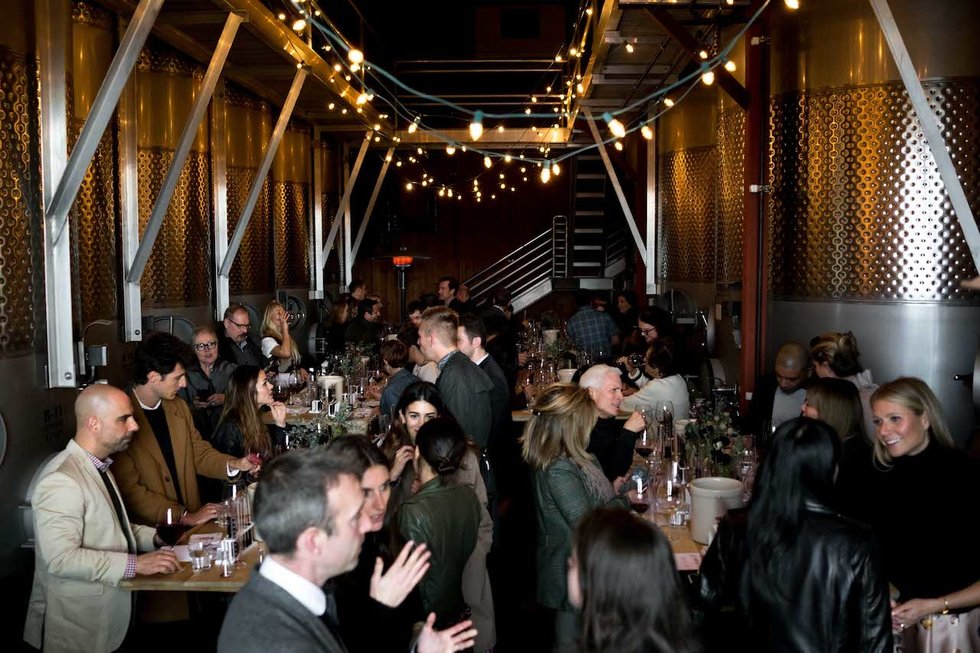 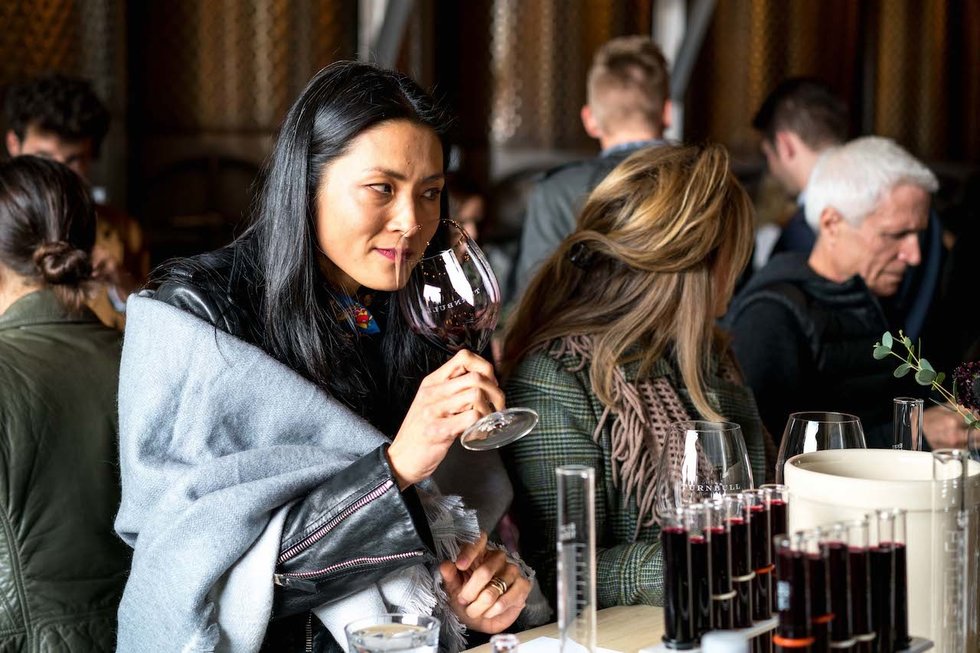 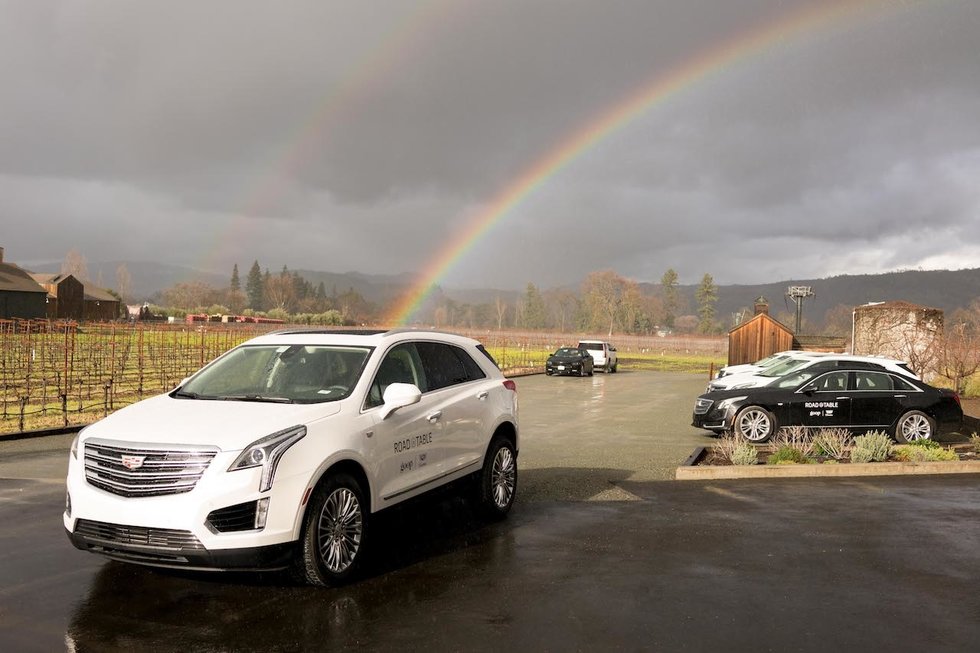 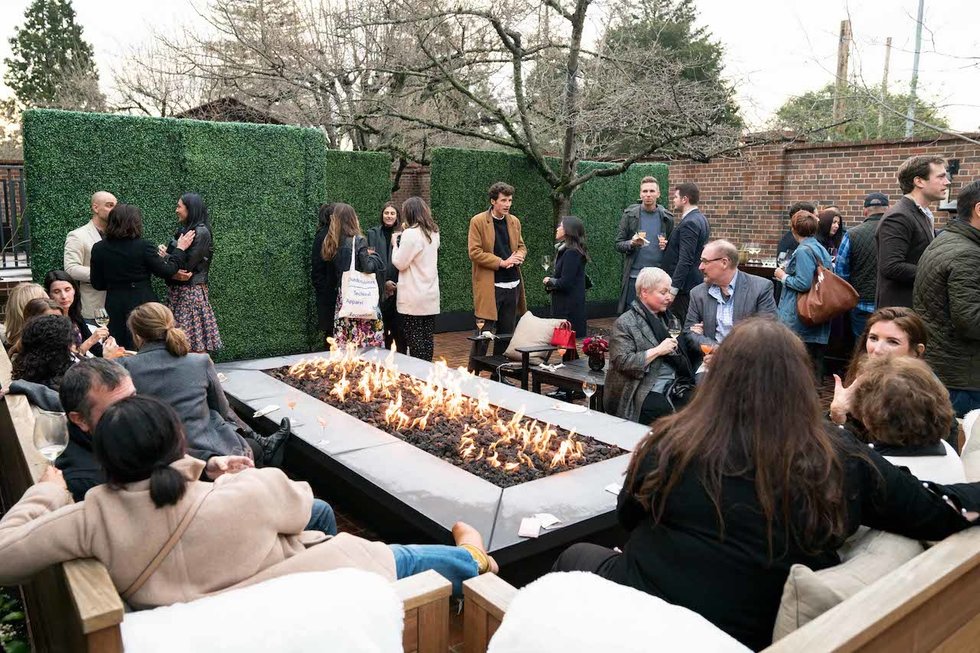 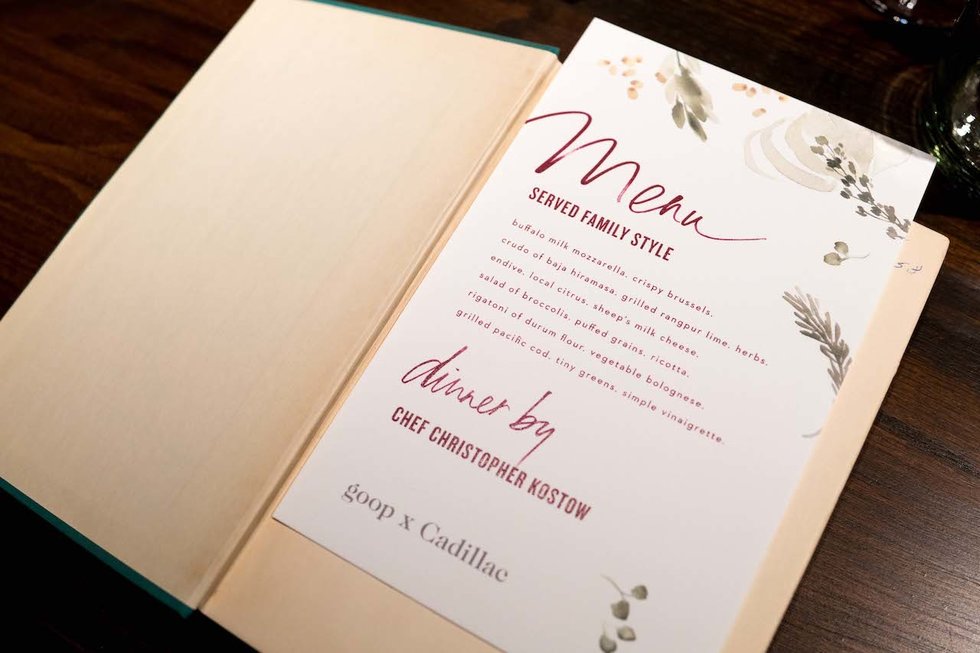 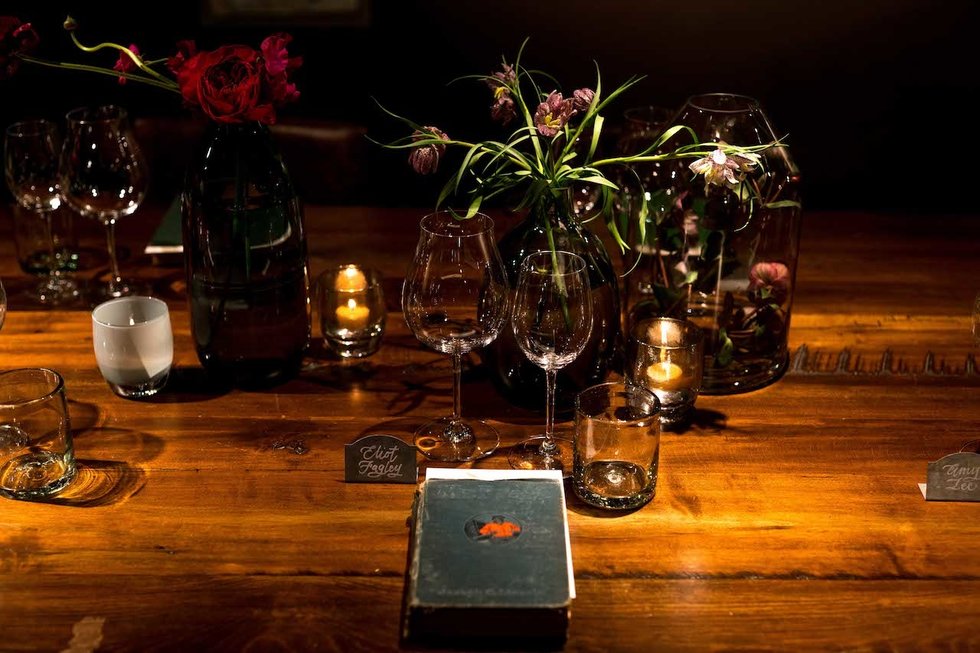 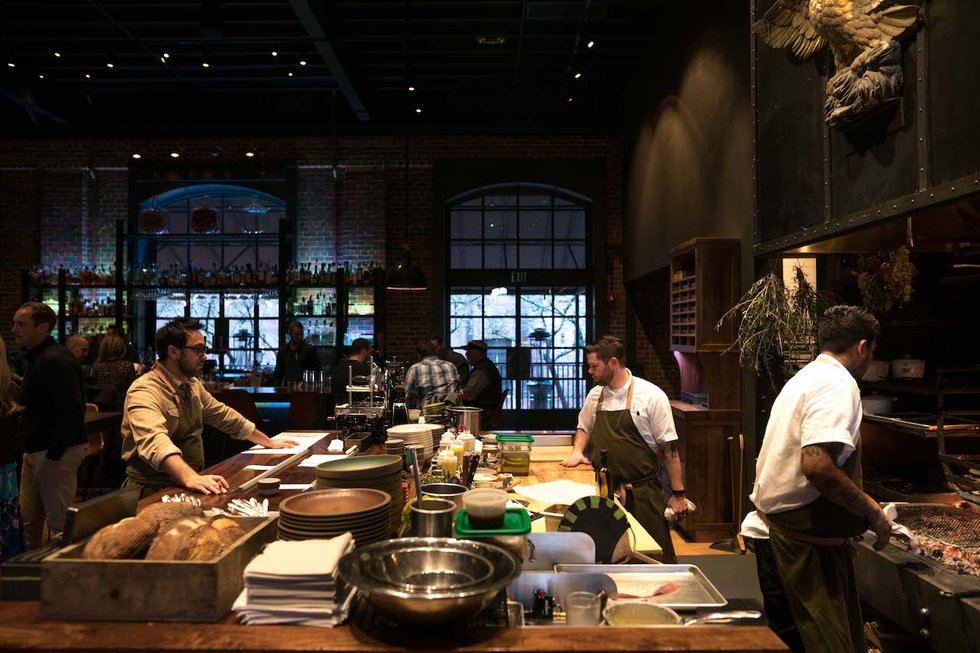 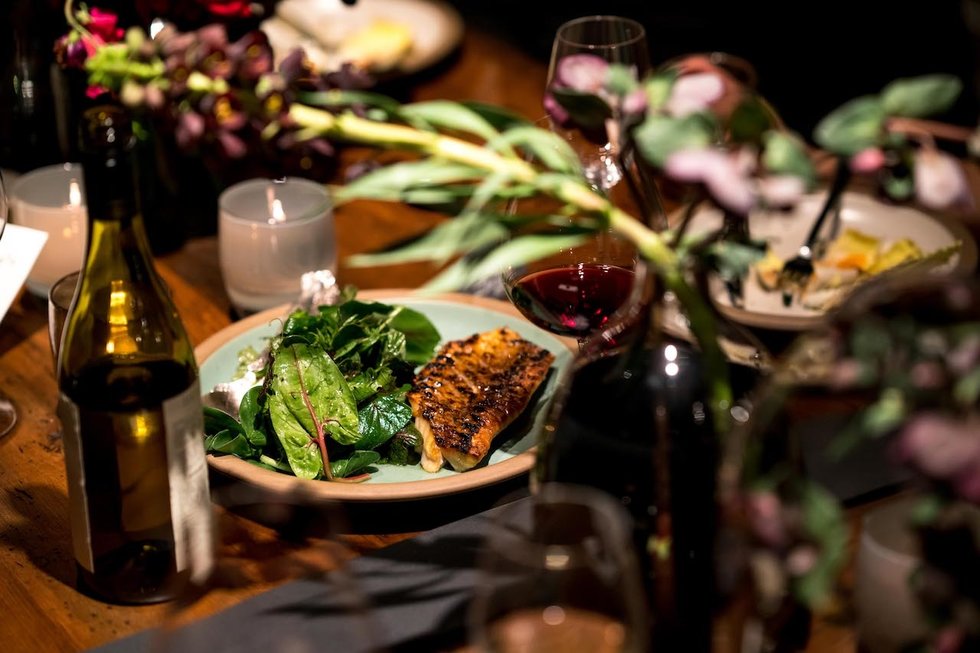 Next we joined the mass exodus from the gallery to the barrel-filled tasting room for the unique wine-blending portion of the event. Betsy and I each grab a spot in front of a set of beakers, wine-filled test tubes and graduated cylinders (loving the mad-scientist vibes). Then Turnbull's winemaker, Peter Heitz, begins walking us through the steps of how to blend a good red. His refrain throughout: "Create what makes you happy." Part teacher, part comedian, Heitz moves through the lesson and it quickly becomes apparent there's a heckler in our midst. Guess who?

Gwyneth, now sporting a cool trench, playfully chimes in from the other side of the room. Naturally, Heitz engages our host, referring to her as "GP" throughout the ensuing banter. GP's actually pretty funny, something that wasn't a total surprise to me since she was hilarious during a recent appearance on The Late Show with Stephen Colbert.

For the record, my blend, which I dub "The GG," is 60 percent merlot, 40 percent cabernet.

Now back in the gallery and in my original shoes, it's off to The Charter Oak we go. First up, more wine and killer Kostow apps—al fresco. (Oh, how I wish I scarfed more of those heavenly crispy potato tostones with brown butter.) Before we tire of lounging in front of the fire pit and after I break a glass (sorry), it's dinnertime. The destination: the restaurant's lower-level private room starring two stunning tables that are Goop-ed to perfection. Once in our seats, the veggie-heavy menu is served, family-style, one dish at a time. To my palate, the buffalo milk mozzarella crispy Brussels sprouts and the salad of broccolis, puffed grains and ricotta are the most scrumptious of the six courses.

Prior to chowing down, however, I spy Gwyneth, now sitting quietly beside her fiancé, Brad Falchuk. Buoyed by a nice buzz, I seize the moment and walk over to introduce myself. "Thanks for having me," I demur. (I was, after all, a guest of Goop's communications team.) She instantly puts me at ease, small talk ensues, and Betsy and a couple of our new lady friends join the party. The conversation turns to the recent Goop health summit in New York, something a charming and refreshingly "normal" Gwyneth is clearly passionate about.

By 8:15pm, dessert finished, I have no more room for wine or socializing; time to say goodnight. Our driver brings the car around, and my pal and I happily flop into the back seat. As for GP and crew? They get to do it all again tomorrow—it's Road to Table, day two.

Plan Your Own Road to Table (Sans Gwyneth)