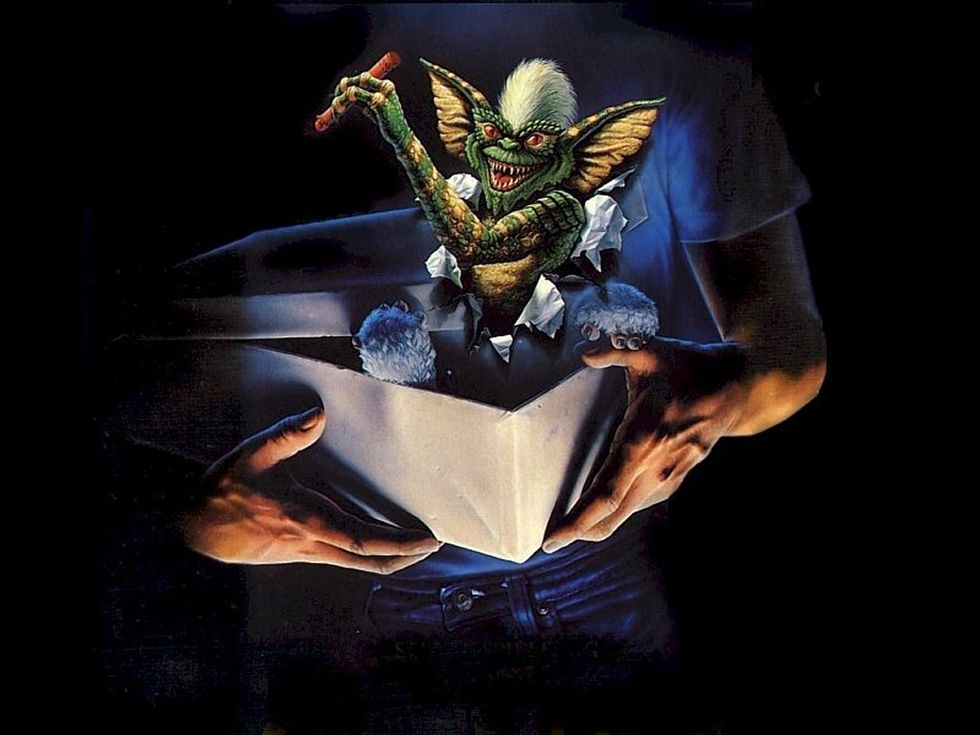 The weather outside is frightful, the fiery resurgence of Mike Singletary's 49ers so delightful, but if you've no place to go, check out one of these fine films at the city's venerable collection of indie theaters.

1. Gremlins
Where:Castro Theatre, 429 Castro St., 415-621-6120
When: Dec. 9
Why: Usher in the holiday season with Joe Dante's 1984 B-movie classic, in which a small, working-class town, straight out of a Norman Rockwell painting, is overrun by mischievous ghouls with Christmas fast approaching. Along with Steven Spielberg's Indiana Jones and the Temple of Doom, Gremlins was considered graphic enough by the MPAA to prompt the introduction of a new rating: PG-13, given later that year for the first time to Red Dawn. Yet for all its gore, Gremlins is a sly, gleefully subversive satire, a comedy with razor-sharp edge.

2. Saint Misbehavin': The Wavy Gravy Movie
Where: Red Vic Movie House, 1727 Haight St., 415-668-3994
When: Dec. 3-9
Why: Activist. Clown. Woodstock emcee. Wavy Gravy, the countercultural '60s icon whose unwavering dedication to peace and the betterment of mankind inspired Ben & Jerry's to create an ice-cream flavor in his honor – chock full of nuts, at the 74-year-old's request – spreads the love on the big screen, as the outspoken subject of Michelle Escrick's uplifting documentary.

3. The Sound of Music
Where:Castro Theatre, 429 Castro St., 415-621-6120
When: Dec. 3-5
Why: The Castro will be alive this weekend with the Sound of Music Sing-a-Long, during which patrons are encouraged to lend their voices to the classic Rodgers and Hammerstein musical, presented in widescreen and with helpful subtitles. Goody bags will be distributed to all in attendance, along with prizes to those wearing the best costumes inspired by the film.

4. Made in Dagenham
Where: Embarcadero Center Cinema, 1 Embarcadero Ctr., 415-352-0835
When: All Week
Why: The working-class women of Dagenham, an east London suburb, achieved lasting social change in the 1960s by fighting for equal rights and pay at the Ford car plant where even the grandmothers were referred to by their male supervisors (and pretty much everyone else) as factory "girls." Nigel Cole's feel-good fantasy, inspired by those real-life events and starring Happy-Go-Lucky's Sally Hawkins, is predictable but supremely entertaining nonetheless.

5. Inside Job
Where: Embarcadero Center Cinema, 1 Embarcadero Ctr., 415-352-0835
When: All Week
Why: Charles Ferguson (No End in Sight) returns with the infuriating, painstakingly researched Inside Job, in which the Oscar-nominated filmmaker uncovers the causes of the 2008 economic collapse. Narrated by Matt Damon, Job traces the rise of a corrupt industry and exposes the troubling relationships that have compromised politics, regulation and academia, ultimately leaving millions on the unemployment line.

6. Four Lions
Where: Lumiere Theatre, 1572 California St., 415-885-3201
When: All Week
Why: It sounds like an invitation for righteous outrage – an unflinching comedy about suicide bombers determined to strike a blow for Islam but too dim to settle on a plan. Incredibly, first-time feature director Christopher Morris, who co-wrote Four Lions with Sam Bain (BBC’s Peep Show) and In the Loop screenwriters Jesse Armstrong and Simon Blackwell, pulls it off, with a hilariously biting satire that turns unexpectedly poignant when his terrorist wannabes stumble into the final phase of their half-baked operation.

7. 127 Hours
Where: Embarcadero Center Cinema, 1 Embarcadero Ctr., 415-352-0835; Sundance Kabuki Cinemas, 1881 Post St., 415-929-4650
When: All Week
Why: In 2003, a boulder pinned mountain climber Aron Ralston to the wall of Utah's Blue John Canyon for nearly five days, forcing him to amputate his right arm in a desperate bid to survive. In adapting his bestselling 2004 memoir to the screen, Slumdog Millionaire'sDanny Boyle deftly navigates the obvious stumbling blocks, transforming a mostly one-man show with a well-publicized conclusion into arresting, often transcendent drama that speaks not only to Ralston's will but also to the durability of the human spirit.