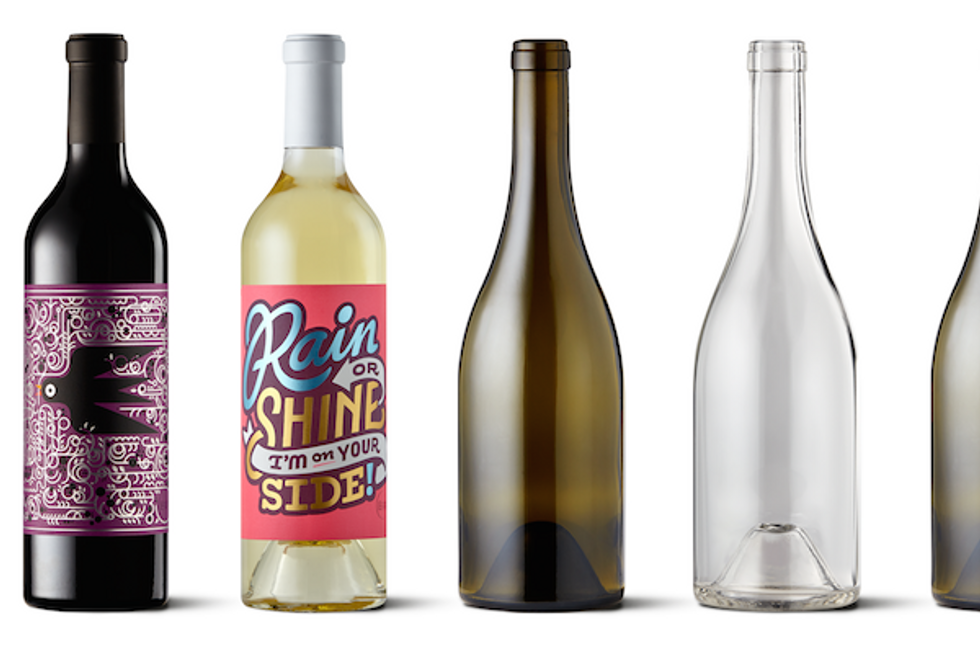 We've been taught never to judge a book by its cover, a wine by its label. And with wines, anyhow, fancy labels often signal overcompensation for what's inside. But now, San Francisco startup Bare Bottle is bringing the worlds of winemaking and design together to package premium wines in high style.

Founded by Corey Miller, a doctor-turned-wine-entrepreneur, Bare Bottle is launching limited edition bottles of California vino with bottle designs as intoxicating as their contents. Prices will range from $25 to $100 depending on the wine. Here are some to look for.

The Wine: Crafted by award-winning winemaker Aaron Pott, who's been making wine in Napa Valley since 1990 (Pott is one of the only Americans to work for the great French Bordeaux Chateaux), this cabernet is soft and nuanced with a core of black stone fruits. The wine opens with scent of fig and dark chocolate, and evolves into black cherry plum, toffee, and sweet tobacco. It was aged for 36 months in 100 percent French oak, about 70 percent new. This is Bare Bottle's first release.

The Design: Music lover and illustrator Don Clark, cofounder of the Seattle-based multidisciplinary design studio Invisible Creature, has actually earned (along with his cofounder brother) four Grammy Award nominations for their design in the music industry, including work for the Foo Fighters, Chris Cornell, and Billboard magazine. For this new cab, Clark dreamed up a graphic purple and silvery lable with a graphic, somewhat kooky crow.

Helen Keplinger + Erik Marinovich's You & Me

The Wine: Named 2012 Winemaker of the Year by Food & Wine, Napa-based Helen Keplinger is Bare Bottle's Chief Wine Officer, in charge of the startup's winemaker selection. Since 1998, she worked with well known Californian and French makers, and has consulted with brands including Fort Ross and Bryant Family Vineyards. For her own Bare Bottle release, Keplinger offers up a 2013 white wine blend (64 percent sauvignon blanc, 36 percent semillon, Sonoma County AVA) with base note aromatics of fig, honey and green olive, and "a high note of something fresh and green," says Keplinger. Look for its release on July 15, 2015.

The Design: A true master of letters, SF-based Erik Marinovich focuses his career on type. He is cofounder of Friends of Type, a virtual whiteboard and notebook where he and his team post logos, letters, and sketches. Since 2009, he has collected a coterie of prestigious clients including Nike, Target, Google, and Facebook. And in 2012, he cofounded Title Case, a creative workspace for workshops and lectures. For You & Me, he wanted an in-your-face label. The result: a shiny poppy text message that reads: Rain or Shine I'm on Your Side!