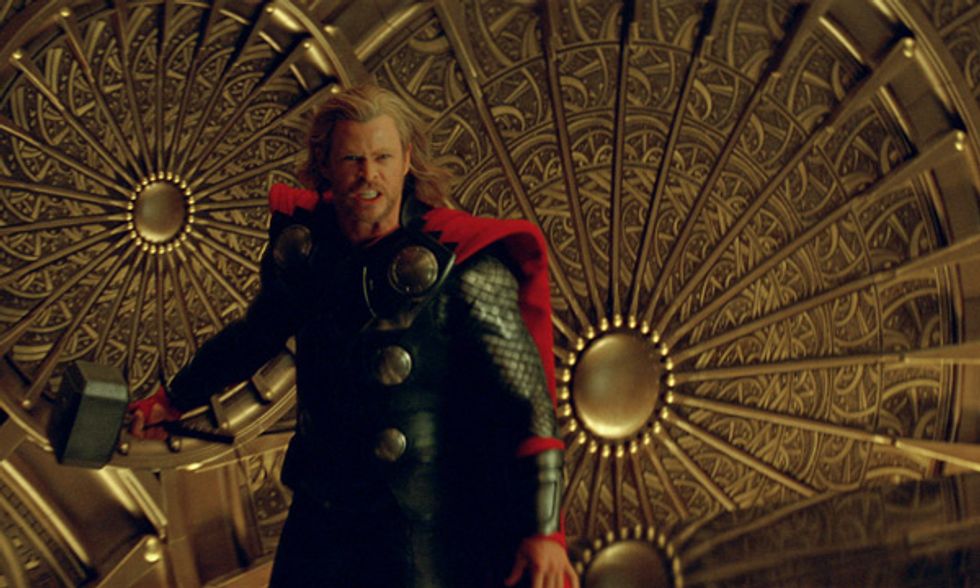 Kenneth Branagh, 'Thor' Stars Talk About Lowering the Hammer of the Gods

Although most know Thor from the pages of Marvel comics, as a superhero distinguished  by his thunderous hammer and his formidable golden mane – imagine a younger, leaner and more politically correct Dog the Bounty Hunter – the character became legend centuries ago, a central figure in Norse mythology.

This Friday, inspired more by comic-book creator Stan Lee's Superman-like interpretation of the character than by any folk saga, the so-called God of Thunder will swing his mighty stick (no pun intended) on the big screen, courtesy of Kenneth Branagh's sparkling 3-D fantasy. Playing the big lug? Chris Hemsworth (TV's Home and Away), who put on 20 pounds of muscle for the role the old-fashioned way, with chicken breasts, eggs and protein shakes.

Starring opposite Hemsworth is an impressive cast including this year's Best Actress winner Natalie Portman – who denies having any childhood comic-book memories – as his Lois Lane; the gaunt, angular Tom Hiddleston (TV's Wallander, in which Branagh co-starred) as Thor's evil adoptive brother Loki; and, perhaps surprisingly, Sir Anthony Hopkins as their omnipotent father, Odin. Was Hopkins keen to work with Branagh, a fellow Englishman, or did he just have some masochistic need to don Odin's burdensome armor-plated suit?

More the former, says Hopkins, who reserves uncommonly high praise for his director, while aiming teasing barbs at his co-stars, all of whom have gathered in Los Angeles to talk of Thor, Shakespeare and Katherine Hepburn.

On working with Branagh:
AH: "The funny thing was, I hadn’t seen Ken for some years. I wasn’t sure how he would respond to me because I was one of the bad boys who ran away from England many years ago. I came out to Cuckoo Land, you know, out here [in Los Angeles], because I never fitted into British theater and all that. So I wasn’t sure how he’d receive me.

"Maybe I’m overstating it. But I’m 20 years older than Ken, and I didn’t know him that well. But we had all the same reference points of the theater. We knew about the actors we’d been working with over the years. And we were both pretty rebellious. I know he was. I was rebellious in the fact that I was a bad boy. I escaped from England and the group theater, and came over to America to Disneyland. I sold out. I’m glad I’ve sold out.

"Ken’s challenged himself over the years. He did some extraordinary things 30 years ago when he was taking on people like Laurence Olivier, doing Hamlet and Henry V, Much Ado About Nothing. And his education is pretty profound. I read a lot, but I hate taxing my mind with analysis. I cannot talk about acting. I hate talking about it. I hate talking about analyzing.

"It turned out that [Thor] was the most enjoyable film I’ve been involved in for a long time, principally because of the cast here, and Ken. I think I’d gone through a patch where I was getting very indifferent to everything, and I could care less. And then to work with Ken, he just pushed the right buttons to get me to give my best. I really value that in him, because I’d gotten lazy. He’s one of the best directors I’ve worked with and so that was the principle reason [for playing Odin]. And hey, I wanted the work. Gotta pay the rent, you know."

On how Branagh, an actor and sometime director best known for his Shakespearean adaptations, handled doing a Marvel movie:
KB: "The scale of the undertaking couldn’t help but make you feel that it was very, very challenging, but that was part of what was attractive. People sometimes ask me, 'How did you do it?' And I say, 'Have you seen the credits at the end -- there’s seven minutes of them. You see all of those names? That’s how I did it.'

"Frankly, when you walk in Day One and there’s a green screen, real mist and rain, the six principals in their new costumes for the first time, and four camera crews and hundreds of people, [you wonder] what to do next. Should I go to visual effects? Should I go to 3-D –  all the places I don’t know? And [then I knew] – find Thor! So we did."

On casting Hemsworth, a relative unknown, to carry a blockbuster:
KB: "Chris came in early on and I think that we [as filmmakers] weren’t fully on the page with what we were developing for him. We became pretty ambitious with what was clearly going to be a character journey, a character who changed from the beginning of the movie to the end, so we realized it wouldn’t only rely on brawn. Iit would need some sort of acting brains and some emotion and some fun.

"At some point we said, 'Well, we should go back and meet that very handsome Australian lad who came in when our story wasn’t really on the page.' And when [Chris] came back, he did workshops and read with the actors. Then one day he nailed it. He told a story about Thor’s deeds like a warrior retelling some story of a great battle, with the kind of arrogance that he needed to have, but with such charm. That was it. And then, you know, when he takes his shirt off, there’s also a wow factor that cannot be denied."

On Hemsworth's connection with the God of Thunder:
"I started with the comic books. I didn’t read all of them – there are thousands, 40 or 50 years’ worth – but I certainly read enough to get a sense of who he was and the world he was from. I read some things on Norse mythology and this sort of fatalistic view they have that everything’s preordained. That leads the Vikings into this fearless attitude in battle and with their lives.

"That spoke volumes to me about Thor. So you sort of fill your head with whatever information and research you have. But on set, it was just about making it truthful and finding a simpler way that I could relate to him. Instead of thinking, 'How do I play a powerful god?' it became about scenes between fathers and sons and brothers. You personalize that, and that helps ground the story.

"The most uncomfortable thing was the eating. I didn’t mind so much the working out. I’d never really lifted weights to that capacity beforehand, and it was certainly a whole new sort of education, for a good six months. But I just don’t naturally sit at that weight, so I had to force-feed myself with 20 chicken breasts, rice and steak. That was the most exhausting part, I think, out of the whole film, was the eating. It wasn’t the fun stuff, either. It wasn’t hamburgers and pizza."

On timeless stories of fathers and sons:
KB: "Shakespeare was interested in the lives of the medieval royal families, but he also raided the Roman myths and the Greek myths for the same purpose. And I think Stan Lee went to the myths that Shakespeare hadn’t used. The connection, if there is one, is that the stakes are high. So in something like Henry IV or Henry V, [where] a reckless man falls into bad company – could that prince be the king? Is he the right man for the job?

"There it’s Europe and England in power, and [in Thor] it’s the universe. When his family has problems, everybody else is affected, so when Thor throws a fit and is yelling at his father and is banished, suddenly worlds are unstable. If the actors take those stakes seriously, the story is passionate, very intense. And I suppose that kind of an observation of ordinary frailties in people – although they’re gods – is an obsession of great storytellers including Shakespeare and including the Marvel universe."


TH: "And actually, then, then we did a scene where Loki finds the big, dark secret of his personal history. After the first couple of takes, Tony leaned across and said, 'Have you got a good agent?' I said yes. And he said, 'You’re going to need it.'"