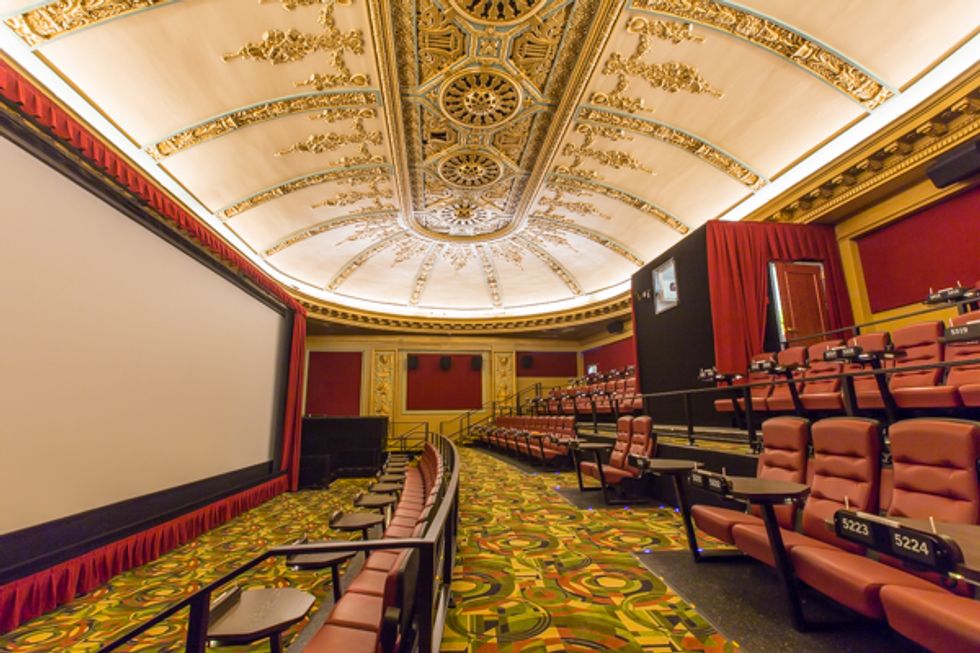 We’ve been counting the days since Austin-based Alamo Drafthouse first announced it would soon bring movies, cocktails, and Texas-style queso to the Mission. Nearly four years later, we’re ready to buy our tickets.

After a painstaking restoration of the historic New Mission Theater, the ambitious cinema opens on December 17th with an epic bang, showing Star Wars: Episode VII: The Force Awakens. The place gives the Kabuki and Embarcadero theaters a run for their money, with designated seating in five theatres—ranging in size from an intimate 34-seat room to a grand 320-seat hall—that will screen both first-run premiers and art house flicks. Super high-tech Sony 515DS projectors promise not to display any maddening commercials. Instead, guests who arrive early will enjoy a clever pre-show program that’s customized for each film.

But here’s the best part for all you foodies out there: The Alamo will be serving food and drink (including 27 beers on tap) directly to your seats, which are blissfully equipped with their own little tables. Just jot down your order and wait for the stealth wait staff to zip through the wide aisles of generously staggered stadium seating sans interruption.

The Alamo Drafthouse at New Mission Theater is the first West Coast outpost of the Texas company that was founded by movie buffs Tim and Karrie League in 1997 (a downtown L.A. property is in the works). And, they've hired a local dream team, including executive chef Ronnie New (Comstock Saloon, Magnolia Brewing), who's designed a perfectly drink-friendly menu complete with kimchi-and-sriracha popcorn; a Mission-meets-NOLA shrimp pobrecito; a bacon jam–infused breakfast burger; and the Alamo’s signature chips and queso.

The popcorn gets a flavorful hit of kimchi and sriracha. (Courtesy of Alamo Drafthouse)

The theater is one of several early 20th century landmarks in SF to have been recently restored—among them 140 New Montgomery as well as the Twitter building. The ornate New Mission Theatre, which screened its last movie back in April 1993, was originally built in 1917 and remodeled to its current style in 1932 by Timothy Pflueger, the celebrated local architect behind masterful movie palaces including the Castro Theatre, Alameda Theatre, and Oakland’s Art Deco marvel, the Paramount. In other words, this place has absolutely everything we need for date night.  //  Alamo Drafthouse at the New Mission Theater, 2550 Mission St. (Mission), drafthouse.com/sf