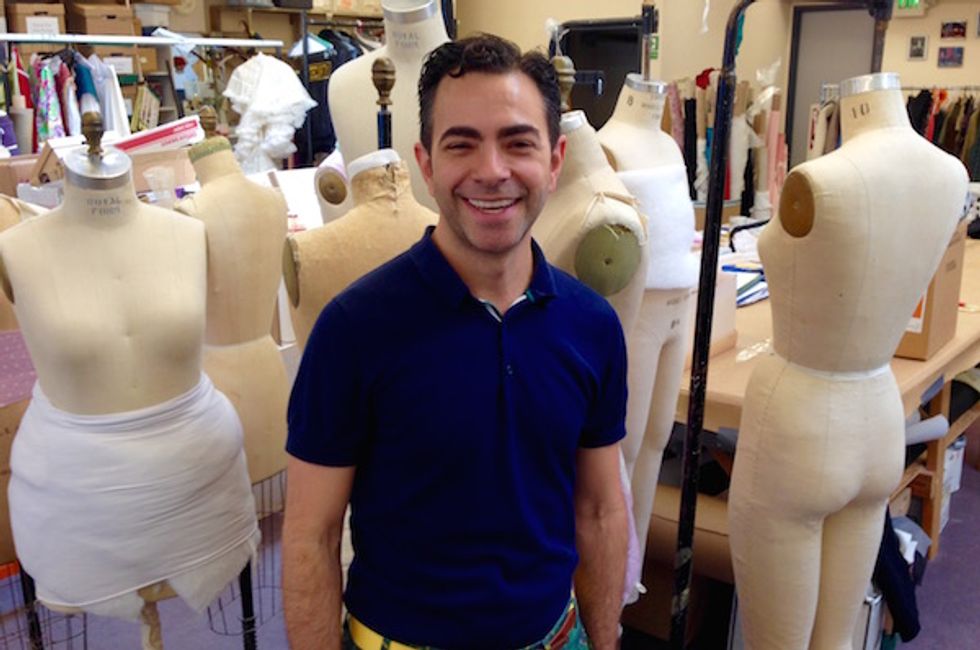 On Pins and Needles: A Visit with A.C.T.’s Costume Director Jessie Amoroso

You may have spotted this recently unveiled building, with its bright scarlet exterior, high glass windows, and flashing Jumbotron, giving a burst of color to a concrete-gray stretch of Market Street near 7th.

It’s not every day, or every decade, that San Francisco gains a new venue for world-class theater, which makes the launching of the Strand a major cultural event for the city—and a stressful whirlwind for A.C.T. Though it’s the company's smaller second home, just a third the size of the Geary Theater, the Strand will open with a big bang.

Love and Information, from acclaimed playwright Caryl Churchill, is a fast-twisting kaleidoscope of 150 characters over 57 scenes, each flashing a momentary view of modern life. On the page, Churchill (A Number, Top Girls) experimentally provides only scraps of conversation, with little indication of who’s speaking, what they’re doing, or where they’re located. A.C.T. chose to set this production in SF, “to tell the story of our home, as we see and experience it,” says Amoroso, the play’s costume designer.

Springboarding off the idea that “the audience might see a glimpse of themselves on stage,” Amoroso studied the shoppers, tourists, tech workers, and street people passing by the Strand during construction. “I spent many days just shooting the locals with my iPhone,” he says. Some of the show’s 150 costumes only appear for a few seconds; all of them had to be designed for maximum impact, so the audience could quickly read each character.

Amoroso’s interest in clothing began with his grandmother, his first sewing mentor, and continued at Cal State Hayward, where he studied theater. Being a costume designer requires both artistic vision and pins-and-needles technique. As fewer people sew at home and fabric stores shut down (SF once had 20; there are now just four), a prolific costume shop like A.C.T.’s often has to look far and wide to find fabric and specialty items to build costumes. Amoroso notes how the field of costume design is changing: “There’s a lot more graphic design, printing your own fabric, getting things made online, using email and digital Dropbox. But a lot of it’s just old-fashioned 19th Century sewing techniques in a 21st Century medium.”

Creating a complicated production in a brand new theater with a new staff should leave Amoroso tearing his hair out, but he cheerfully claims tech week (the run of performances leading to opening night, during which every technical detail—lighting, sound, props—is fine-tuned) is his favorite part of the process: “Once the costume is inhabited by the actors, you really see what it can do. You’re flying by the seat of your pants to get things just right, which might mean dying or distressing fabrics, getting new accessories, or cutting a costume all together because it just doesn’t work on stage.” With so many moving parts, the goal “is not to hold too dearly your ideas.” He observes, perhaps with a touch of understatement, “Sometimes the dream you start with is not the dream you finish with.”

The dream of the Strand Theater, in the works since A.C.T. purchased this former movie theater—which from 1917 to 2003 showed everything from silent films and Hollywood premieres to The Rocky Horror Picture Show and even porn—is now a reality. Amoroso and his costume department will make changes right through the final preview. Opening night is Thursday, June 17. After that, the designers can refuel their tanks, while local audiences see this vision of modern San Francisco for themselves.

K.M. Soehnlein is a novelist (You Can Say You Knew Me When, Robin and Ruby). His most recent piece for 7x7 was a profile of film producer Brian Grazer.