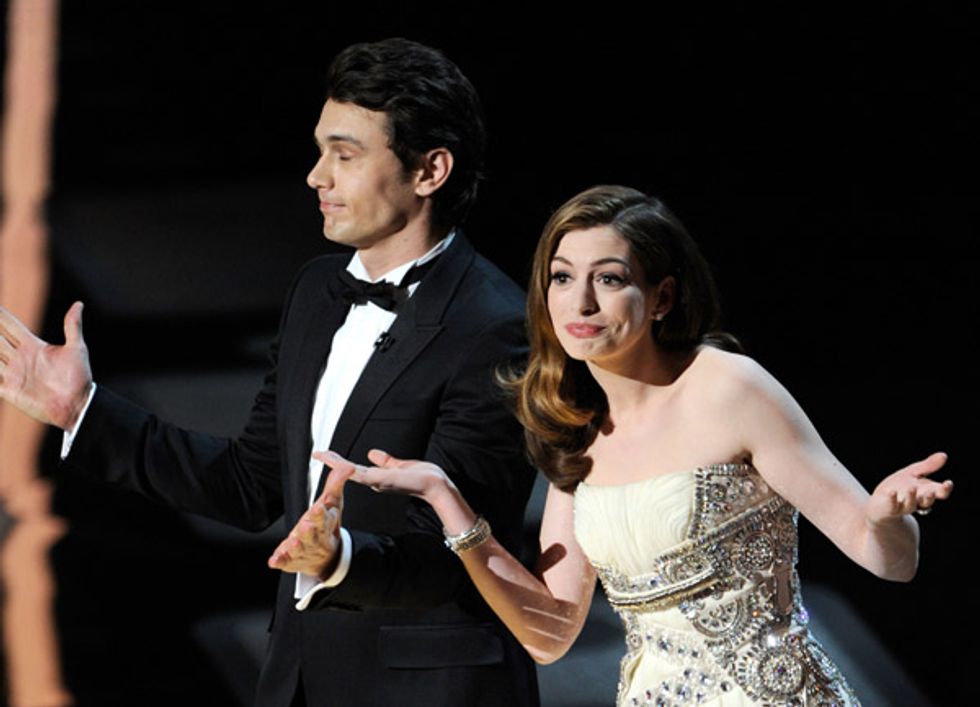 The day after the Oscars, the ceremony is poked, prodded and reconsidered ad nauseam. Was the telecast too long? (This year, no – although the show typically lasts around four hours, the 2011 version clocked in at an economical three-and-a-quarter.) Were there any shocking upsets? (Sadly, no.) Did the hosts live up to expectations?

And that, in an otherwise quiet year, seems to be the most hotly debated question. Or maybe not – the general consensus, among those who cared to weigh in, is that co-hosts Anne Hathaway and (Palo Alto’s own!) James Franco failed at that most daunting task, opening the show and keeping viewers amused between award presentations.

I disagree. I offer no empirical evidence to support my argument, but one thing I preferred about this year’s telecast – besides the noticeable absence of time-wasting filler, often in the service of stroking Hollywood egos – was Franco’s laconic approach. Rather than wallowing in the hype and dressing up the proceedings with faux reverence, he seemed refreshingly low-key.

That should have been apparent from his pre-show interview on the red carpet. Asked how he arrived at the Oscars – which, I guess, was supposed to provoke some long-winded recital of the wonder of it all, followed by an acknowledgement of a higher power, or at least Danny Boyle – he simply replied, “I drove.”

After the show’s opening video package, one of the funniest in recent memory, Franco seemed reserved but never unaware; terse as he was, his offbeat jokes hit their marks. For those seeking something a bit less restrained, there was Hathaway, bursting with jittery energy, often yelping her approval of the presenters. Her musical number was amusing – deliberately so – and capably performed.

The most common complaint I’ve read today is that Hathaway and Franco were hopelessly upstaged by a Ghost of Hosts Past – in this case, Billy Crystal, on hand to present a video tribute to Bob Hope. Crystal received a raucous standing ovation, and perhaps he will return to host the ceremonies in 2012.

Yet his shtick seemed tamer and more tired than Hope’s, from 50 years ago. Although nostalgia seems to have carried the day – conventional wisdom has it that a returning Crystal was one of the telecast’s coups – nobody seems to acknowledge that his too-obvious one-liners left the crowd less than delirious.

Crystal was, I think, what most people consider the consummate host: He embraced the proceedings’ self-importance, indulged in corny song-and-dance routines and generally gave the show everything it supposedly needed and more. He’d been there and done that before, but on Hollywood’s biggest night, perhaps too much is never enough.

Of course, people have complained for years that the telecast is too long, groaning at every bloated production number that posed the inescapable question “Why?” (In response, the show’s producers have largely eliminated reaction shots from non-winners, which I think is a mistake.) But when the hosts keep their own bells and whistles at a quieter volume, they get slammed.

I’d like to compare it to the difference between the Leno and Conan camps: Leno fans like a familiar face reeling off familiar jokes, and when the punch lines arrive with the subtlety of something less than a jackhammer, they get antsy. Conan fans expect something different: surprise. The comparison falls apart because Franco isn’t a comedian, but what I appreciated more than his humor was his refusal to buy into the hype, to take the Oscars as seriously as they take themselves.

Maybe that’s just me. But the next time you sit through a four-hour Academy Awards, watching the host blow kisses to celebrity pals – Franco endearingly acknowledged his grandmother, but didn’t kowtow to, say, Jack Nicholson – remember that there is an alternative.