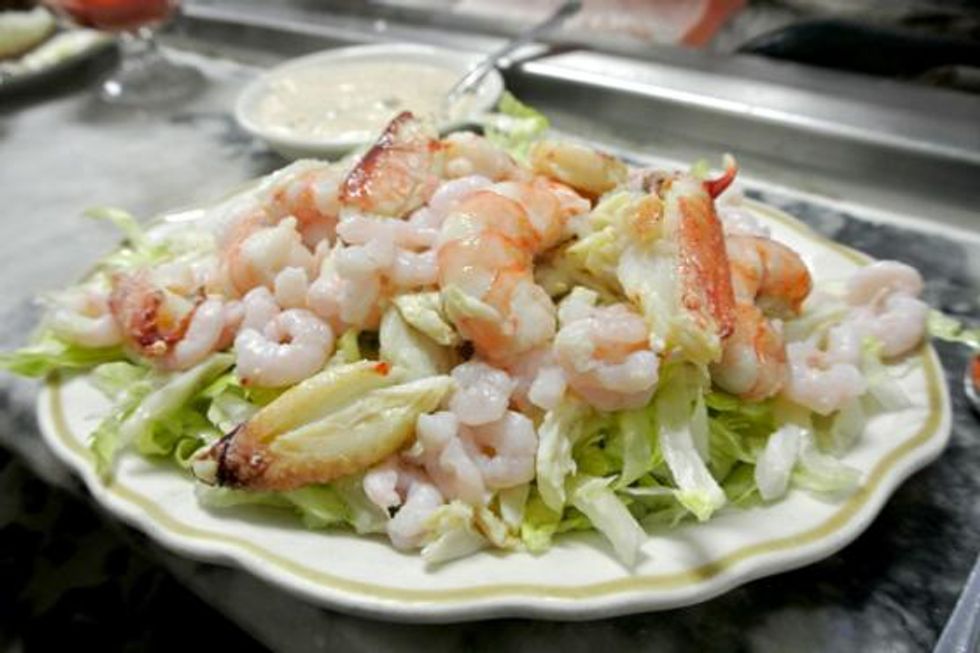 The daily queue of locals and tourists snaking outside the door and down Polk Street is testament to Swan Oyster Depot's continued status as one of San Francisco’s oldest and most beloved culinary institutions. But the proof is really in the salad dressing.

Opened sometime in the late 1890s by the Laustens, a pair of Danish immigrant brothers who had previously worked in the shrimping business, Swan was originally named Cable Oyster Depot, and sat a couple blocks away at the corner of Polk and California Streets.

When the building crumbled in the 1906 quake, the brothers relocated and reopened under a new name that would be a harbinger of future success: In Denmark, the swan is a symbol of fertility and prosperity.

In 1946, the Laustens sold their business to Sal Sancimino, whose family has run Swan Oyster Depot ever since, and who added the menu item that would become the restaurant's signature: the Combination Salad.

Piled with freshly steamed bay shrimp, juicy orange-striped prawns, and a generous dollop of sweet, fresh Dungeness crab meat on a bed of crunchy iceberg lettuce, the salad makes for a perfect weekday lunch. But perfect seafood aside, it's the tangy, creamy Louie dressing that pulls the dish together.

According to Sancimino family lore, the Palace Hotel's Chef Louie, the purported creator of the dressing, was a regular at Swan and shared his recipe with the family. Of course, the actual origin of Louie dressing is widely debated, with multiple restaurants from San Francisco (including the St. Francis Hotel) to Spokane claiming the stuff as their own. But while recipes for Louie dressing—a mix of mayonnaise, ketchup, hardboiled eggs, and pickled relish—abound, we still say no one makes it like Swan. Well, except for you! Do try this at home.  //  Swan Oyster Depot, 1517 Polk St (Russian Hill), sfswanoysterdepot.com

1. Drain black olives in a colander or on a paper towel to remove excess liquid.

3. In a bowl, mix together ketchup and mayonnaise.

4. Finely chop the hardboiled egg and black olives, and stir into the dressing along with the sweet relish.

5. Place in refrigerator for 30 minutes to rest.