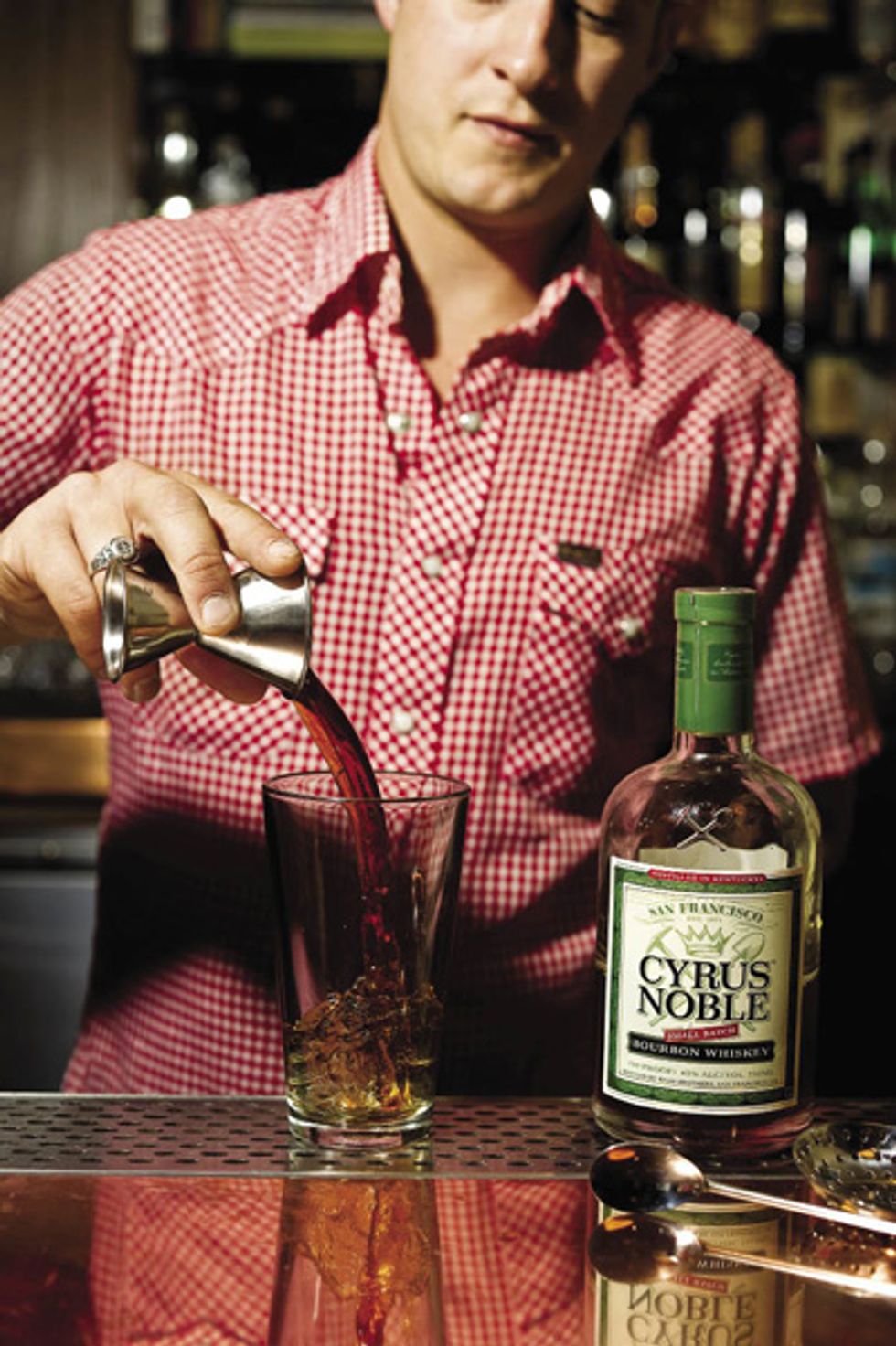 This city may have a proud history of drinking, but bourbon is not exactly the first thing that comes to mind. Bourbon is the spirit of Kentucky, the base of a mint julep, something you’re supposed to drink on a hot day on a wraparound porch—neither of which you’ll see much of in SF. Although the spirit was crafted in abundance in Cincinnati up until the temperance movement forced its production to Kentucky, bourbon’s identity today is entrenched in the South.

But here, we have Cyrus Noble, a Kentucky-based bourbon first distributed exclusively to the West Coast more than a hundred years ago. In 1871, the Haas family—Bavarian Jewish brothers who came to San Francisco during the Gold Rush and operated a grocery store on Davis and California streets—fell in love with Cyrus Noble on a sourcing trip. When they learned that the whiskey was named for a talented (if drunken) distiller who fell into a vat one day, nearly killing himself, the story sealed the deal. They brought Cyrus Noble home from Kentucky to thirsty miners. From there, SF-based Ernest Reuben Lilianthal, a wholesale liquor business entrepreneur, helped Haas Brothers distribute Cyrus Noble under their brand. (The two families eventually joined by their children’s marriage. If you’ve ever been to the ornate Haas- Lilianthal house on Franklin Street, you now know the correlation.)

Cyrus Noble never went away, but the 90-proof, straight sour mash bourbon was recently spruced up with a handsome new label, and its story is being retold at bars around town. Yes, it might say “Bottled in San Francisco” on the label, but Haas Brothers is keeping production in Nelson County, Kentucky, where it originated.

Today you can find the original Cyrus Noble at Tadich Grill, Kokkari, and many other restaurants around town. But if a bourbon made exclusively for San Francisco in Kentucky isn’t local enough for you, maybe one crafted right here is. Next fall, St. George Spirits will release the first bourbon entirely produced, bottled, and sold in the Bay Area. They are also introducing Breaking and Entering, a spirit made from six different Kentucky bourbons blended together. Who knows? Maybe they’ll strike gold.

Bartender Buffalo LoGrasso (pictured above) features his Hudson cocktail this month at Cotogna in Jackson Square. The show-stopping recipe is a play on the classic Manhattan with the addition of a flamed orange garnish and maple syrup.