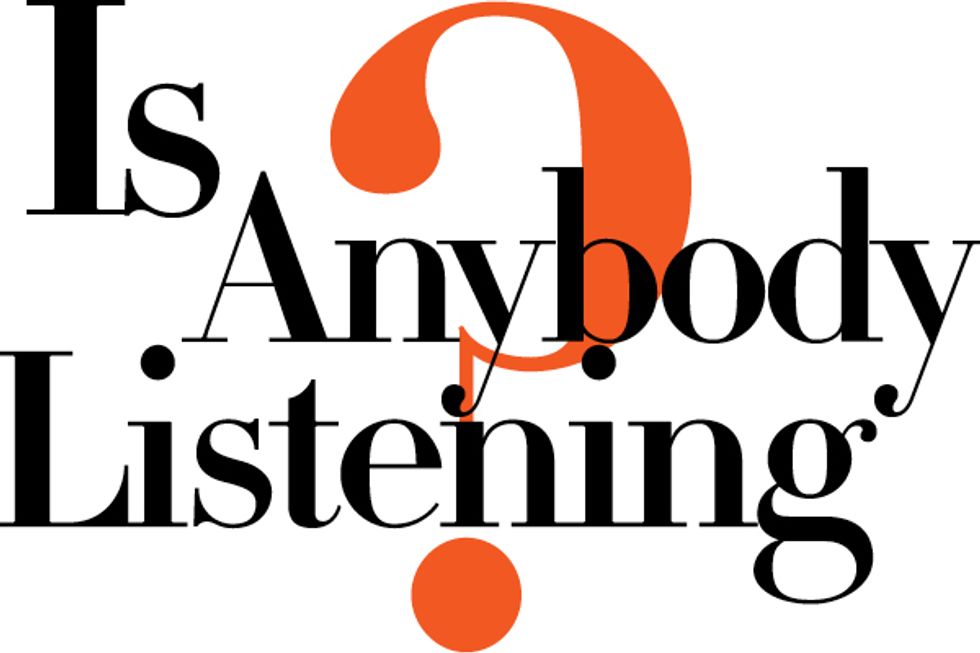 When you think about all the players and the lofty ideas packed into San Francisco and Silicon Valley, it’s no wonder the world is talking about us. But the real question is: Are we talking to each other?

Read a magazine, a newspaper, a blog, or your Twitter or Facebook feeds, and someone will be talking about how something is the talk of Silicon Valley.

During just one week in April, for example, New York Magazine covered a scandal surrounding a female entrepreneur being passed over by Google during an acquisition; the New York Times reported the story of Apple, Adobe, and other tech giants colluding not to hire each other’s employees; and Dogster.com (a website about, um, dogs) waxed rhapsodic about “Ramona the Love Terrier” (owned by ReadWrite’s tech editor). Each media outlet claimed its subject was indeed the “talk of Silicon Valley.”

Yet in the hills of SF where the populations of 20-something billionaires and homeless people are both on the rise, there is a growing problem: Silicon Valley, with all its mind-boggling innovations and hifalutin ideas, often lacks the social skills to communicate about the real needs of everyday SF.

As a technology columnist for the New York Times, I’ve learned at least one thing about this city: There are two SFs: one that is immersed in tech, and another that is not. Let’s just say the two are rarely seen sharing a negroni in the same banquette at The Battery.

The reality: SF is an industry town.

Never mind that only an estimated 8 percent of our city’s workforce is taking home a tech company–issued paycheck; tech talk seems to pervade our conversation. Stop into any SF bar for a farm-to-table cocktail, and you’ll overhear the hoodie crowd waxing poetic about a photo-filtering app, while another group of laptop warriors shows off a Keynote presentation for a new ride-sharing service. Duck into a coffee shop to get hopped up on chatter about Bitcoin and drones. The city, a tech-obsessed little bubble, feels packed with idea people, each eager to share their vision for making the world better. Meanwhile, bubble outsiders are being driven both out of town and to their wits’ end—vomiting on fancy company buses and protesting outside the homes and offices of the wealthy tech elite.

No wonder the two don’t talk.

“New Yorkers tend to view Silicon Valley as a hyper-advanced society with different rituals and customs,” says Kevin Roose, a columnist for New York Magazine. The Valley, after all, is the place that incubated Facebook, which has connected more than 1.2 billion people around the globe; hatched Twitter, which helped push democracy in the Middle East and reinvent the modern media industry; and spawned companies such as Airbnb and Uber, both challengers to entrenched and arguably overly regulated industries.

But, as Roose notes, these companies, which have created incredible wealth very quickly, continue to stretch their legs north, driving property values ever-higher and further distending “the gap between the haves and the have-nots.”

In a column I wrote for the New York Times, Mark Leslie, a retired entrepreneur and lecturer at the Stanford Graduate School of Business, called SF “a miraculous place” where “the streets are lined with gold.” In another column, Ken Reggio, executive director of Episcopal Community Services, which provides housing and food for thousands of city residents, told me, “Our funding has been relatively flat during the past several years.”

Company towns are everywhere in America. Detroit was fueled by car production. Washington, D.C. oozes political power. New York City would surely fall into ruin if it weren’t for the navel-gazing media machine. And Los Angeles shines thanks to the velvet ropes that protect the movie industry. But these cities also have other things, other people, and other ideas—and in my experience, they mostly mingle.

“In NYC, a lot of industries have equal footing. Here, it feels like you’re either in tech or you’re not,” says Evelyn Rusli, a reporter with the Wall Street  Journal, who made her pilgrimage out West in 2012.

SF is unlike any other city in the world. Cars drive themselves; people wander the streets peering through Google Glass; and if you want something—virtually anything—there’s an app that will bring it to you. Yet there’s no Uber for people who don’t have a place to sleep or a hot meal to eat. There’s no Airbnb to help the teachers, police officers, fire fighters, or other city workers find affordable housing in the very city they educate and protect and serve.

There is one thing that makes Silicon Valley different from all other industry towns. The people who live and work in tech have a perverse yet beautiful mentality that the world is a little broken and they can fix anything. And that’s where things can change. Imagine what might be possible if those tech workers just skipped that free lunch at the company cafeteria and stepped outside their impossibly well-appointed offices. Imagine what the big dreamers could do if they got out and interacted with the community, or what might happen if start-ups were motivated to create products and services that would actually make SF a better place.

“The biggest challenge for techies is to think about how their community works and how they can contribute while resisting the realities of scale,” says Anil Dash, co-founder of ThinkUp. “They always want to think about that saying, ‘A million people isn’t cool; a billion people is cool,’ but fixing a city is about fixing something for 100 people. Realizing this is essential to solving this problem.”

SF’s long-time residents—specifically, ones who practice NIMBYism—also need to face up to this challenge. These people have a responsibility to help the city grow and morph and change. Blocking new housing developments and treating tech workers disdainfully won’t solve any problems.

One thing is for sure: Unless the residents of our two worlds start talking to each other, this experiment of a tech utopia probably isn’t sustainable. If the enterprise fails, then Silicon Valley will really be the talk of Silicon Valley.