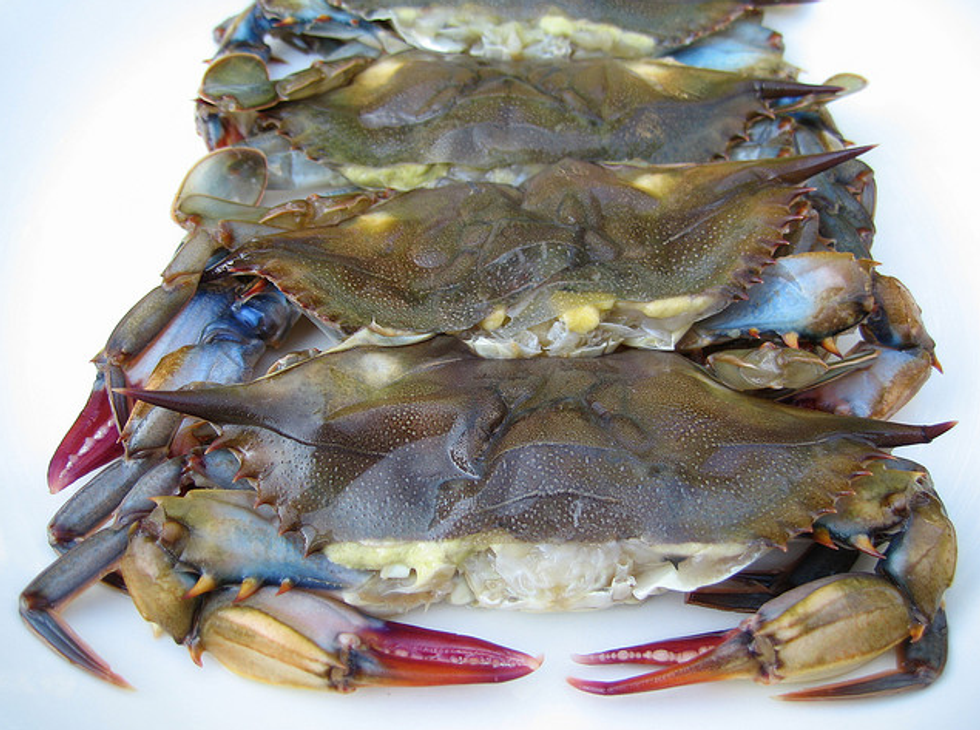 Soft-Shell Crabs Are In: Who's Cooking Them Up?

Fresh soft-shell Chesapeake Bay blue crabs are coming in strong right now from the East Coast and just starting to surface on menus across town. Although we see soft-shells year round wrapped into California-style sushi rolls, those are usually frozen and shipped in from Asia.

The real deal soft-shell season is fleeting because the crabs must be caught yearly during molting season, just after they shed their shells. (Much to the locavore's discontent, the local Dungeness isn't worth eating in its soft shell stage.) Chris Barry, purchasing manager at Ports Seafood, says the first "shed cycle," as its called, should continue until mid June. Then, they'll drop off considerably until late July, when the second cycle will start up and continue until as late as October. "But most San Francisco chefs are done with them by July," says Barry.

Soft shells are expensive, and labor-intensive to prepare, so it takes an appreciation for them to make it worth chef's while. Clearly, there's some sentimental value here. A native East Coaster myself, the diaphanous crablets remind me of long, hot childhood summers spent at the shore. Here's were to get a taste—free of sweat and humidity—right now in San Francisco.

Chef Parke Ulrich of Waterbar remembers eating "sweet", "juicy" Chesapeake Bay soft-shell crabs as a kid growing up outside Philadelphia. He just had them on his dinner menu last week as a special, served crispy with spring onions, smoked bacon and morel vinaigrette. Pending lower prices from his supplier, Ulrich hopes to put them back on the menu consistently in the coming weeks.

Tomorrow, Hoss Zare will have them as a special appetizer at Zaré at Fly Trap: one lightly pan-roasted soft-shell served with a sauce of sweet corn, scapes and spicy red harissa. A cooling side of Persian cucumber-cilantro relish balances the plate.

They're also on the menu now at Prospect, where chef Ravi Kapur serves one crispy soft-shell as an appetizer, accented with bacon, tempura-fried scapes and spring onion aioli.

For lunch at Anchor & Hope, chef Eric Markoff serves them bacon-wrapped atop his heavenly take on the BLT. At dinner time, they're fried up "salt-and-pepper-style" alongside pad Thai. A Baltimore native, Markoff likes the versatility of soft shell crabs and says "they are very much a childhood memory."