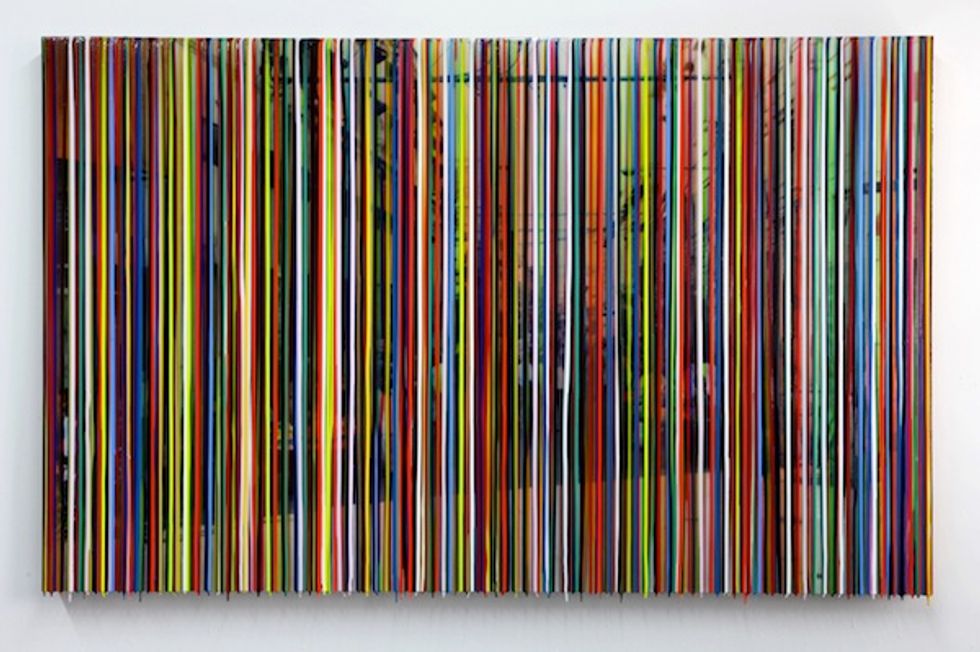 Markus Linnenbrink's transfixing works are eye candy of a world-class variety. Reveling in process and finish, they are the product of so many layers of poured and pooled resin in terrifically bright color. At times the artist allows his surfaces to remain glossy and opaque; in others they are translucent or even cavitary, exposing underlying wooden supports or unexpected treasures, like family photographs or reflective foil. A new exhibition by this artist, whose work has been collected by the likes of SFMOMA, the Hammer Museum in Los Angeles and many institutions throughout Europe, is not to be missed.

Douglas Schneider weds figuration and fragmentation with color and text in a style all his own. The result occurs as layered oil paintings that slam a viewer with the flat surface while somehow still beckoning her to dive in headlong. An homage to pop art appears in the form of multiplied female figures and other graphic elements sourced from film and other media. Beyond these overt stylings, though, the artist sneaks in subtle but essential references to issues like climate change, often including images of melting ice caps enlarged to a point of abstraction. "We stand spellbound by our own creations," Schneider says. "We believe that what we’ve created is bigger, more complex and more real than ourselves.” It is this sentiment, loaded with ambivalence, that the canvases project.

Out of the Park, at George Krevsky Gallery

Whoever told you that art and sports don't jibe was sadly mistaken – a fact that veteran art dealer and baseball fan George Krevsky drives home annually with his Art of Baseball exhibition. This year, Out of the Park includes over 40 artists from around the country, depicting their favorite players, conveying the excitement of the game and otherwise paying tribute to America's national pastime. "Baseball is truly a reflection of America's cultural mosaic," says Krevsky. So art strives to be, so why not marry the two?

Out of the Park runs from April 4 through May 25 at George Krevsky Gallery (77 Geary Street, 2nd floor). Opening Reception: Thursday, April 4

Petaluma-based photographer Michael Garlington weds exceptional skill to a surrealist sensibility, producing staged, grayscale photographs that suggest the dark underbelly of an old-time America belonging to a parallel universe. Cultish and carnivalesque in a Tom Waits vein, they refuse to be simply filed away under "bizarre" or "kitsch." In this exhibition, Garlington presents his work alongside black and white paintings by his studio partner, Jonny Hirschmugl. Both will be stepping out of their comfort zones to create a massive sculptural project: An archway modeled after the gates of hell.