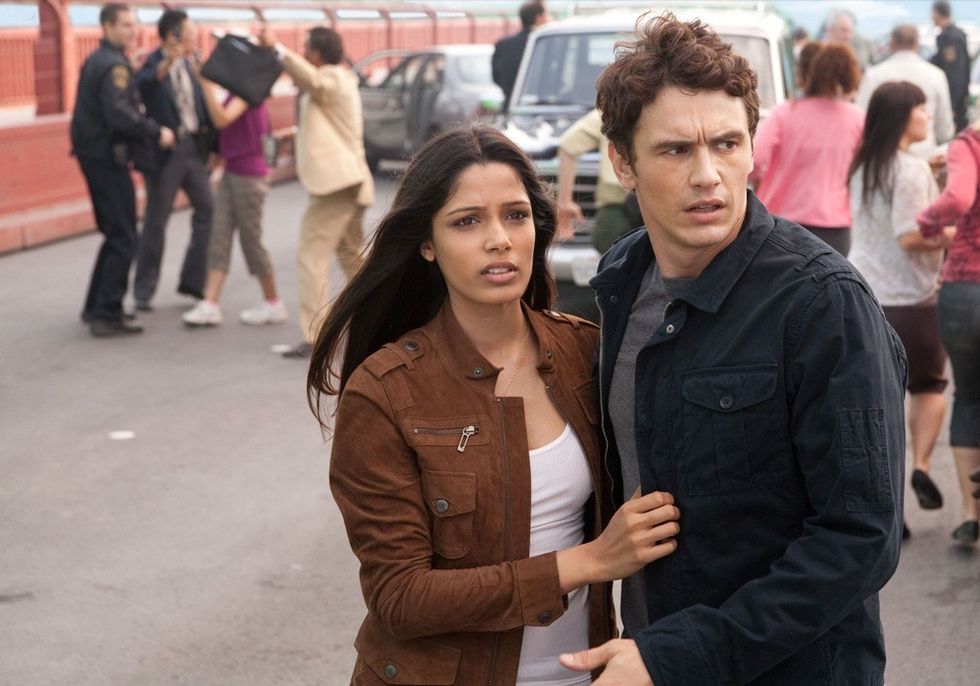 Summer is slowly winding down, giving Hollywood just a few more weeks to unload the last of its annual sequels, prequels and remakes before Oscar season begins in earnest. The bad news, for some: School will be back in session soon. The good news: August packs a promising lineup of big-screen spectacles, including:

Rise of the Planet of the Apes (Aug. 5)
The primates: James Franco, Freida Pinto, John Lithgow, Andy Serkis
Calling the shots: Rupert Wyatt (The Escapist) tries his stinkin’ paw at resurrecting the franchise Tim Burton turned into a damned, dirty punch line.
The skinny: While Burton’s miscalculated 2001 reboot left a sour aftertaste, early footage from this Apes prequel – in which Weta Digital’s masterfully animated monkey types terrorize drivers on the Golden Gate – looks less like well-intentioned camp than a haunting vision of the Ape-ocalypse.
Rated PG-13

Final Destination 5 (Aug. 12)
The doomed: Nicholas D’Agosto, Emma Bell, Arlen Escarpeta, David Koechner
Calling the shots: Steve Quale
The skinny: With newcomer Quale, who co-directed James Cameron’s Aliens of the Deep (2005), behind the camera, the Destination series continues its 11-year death march with yet another round of eviscerations, decapitations and elaborately staged fatal accidents.
Rated R

The Whistleblower (Aug. 12)
The players: Rachel Weisz, Vanessa Redgrave, Monica Bellucci, David Strathairn
Calling the shots: Larysa Kondracki
The skinny: The world of sex trafficking serves as the backdrop for first-timer Kondracki’s thriller, featuring a stellar cast led by Redgrave, Strathairn and Weisz. Inspired by the real-life story of Kathryn Bolkovac, a Nebraska police officer who uncovered an international scandal during a peacekeeping stint in Sarajevo, Whistleblower is a sturdy police procedural that strips back the curtain on the underground sex trade.
Rated R

Conan the Barbarian (Aug. 19)
The warriors: Jason Momoa, Rachel Nichols, Stephen Lang, Rose McGowan
Calling the shots: Marcus Nispel
The skinny: Having rebooted The Texas Chainsaw Massacre (2003) and Friday the 13th (2009) with drastically uneven results, Nispel, who rose to prominence on the strength of ad campaigns for Fidelity Investments and music videos for hit-makers including Mariah Carey and No Doubt, returns with a 3-D take on the pumped-up 1982 fantasy that helped make Arnold Schwarzenegger a very long household name.
Rated R

Fright Night (Aug. 19)
The players: Colin Farrell, Anton Yelchin, David Tennant, Toni Collette
Calling the shots:Lars and the Real Girl director Craig Gillespie
The skinny: Tom Holland’s 1985 chiller about a centuries-old vampire sucking the life out of a quiet suburban neighborhood gets a 3-D makeover courtesy of Gillespie and Buffy the Vampire Slayer producer (and sometime screenwriter) Marti Noxon, who promises plenty of black humor to go with the gore and Farrell’s withering gaze.
Rated R

Don’t Be Afraid of the Dark (Aug. 26)
The haunted: Katie Holmes, Guy Pearce, Bailee Madison
Calling the shots: Newcomer Troy Nixey and Guillermo del Toro, so scarred by memories of the 1973 TV movie about a mansion infested by demons that he chose to co-author and produce this edgier low-budget remake.
The skinny: “What I loved about the original is that the creatures were not big and scary, they were small and wickedly smart. They relied on the fact that no one could see them, and no one would believe they existed,” says del Toro. “That’s the essence of fear – when something that shouldn’t be is, and when something that should be is not.”
Rated R

The Debt (Aug. 31)
The spies: Helen Mirren, Sam Worthington, Jessica Chastain, Ciarán Hinds
Calling the shots: John Madden
The skinny: Mirren stars as an aging Mossad operative haunted by a decades-earlier hunt for an infamous Nazi war criminal that may have resulted in the murder of an innocent. Madden (Shakespeare in Love) directs this remake of the 2007 Israeli thriller.
Rated R