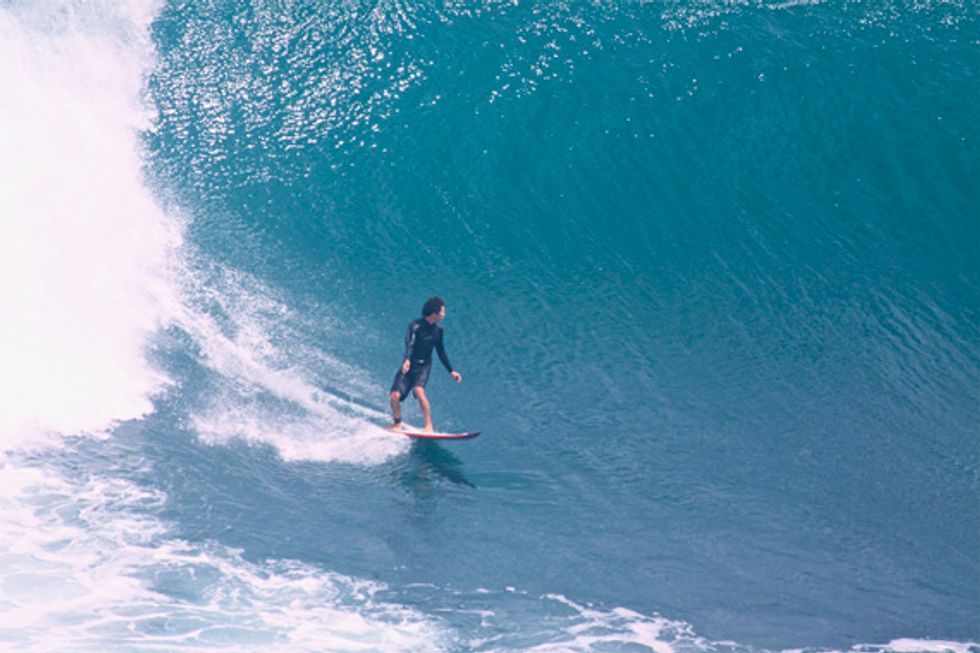 Deeply ingrained in modern surf culture is the desire to find the perfect wave. Somewhere out there in the world is the wave just right for you. At least that’s the story that the multi-billion dollar industry loves to promise in glossy surf magazines.

The problem is, as Ocean Beach resident and author Jaimal Yogis points out, that while “the search for the perfect wave” might be really fun for surfers, it’s not always good for the pristine coastlines where those elusive waves can be found.

“Surfing changes coastlines. If a community has good waves, then it almost inevitably follows surf culture. It starts with a surf shop, and then all other local businesses are sucked into the scene as well. You can see it at a place like Kuta, Bali, which is inundated with trash and partying. Surfing has dominated many local economies in coastal areas, and it’s not always for the better.”

As a journalist and avid surf traveler, Jaimal, who wrote a coming-of-age memoir about surfing and Zen philosophy called Saltwater Buddha, had to confront the guilt he felt with how often he traveled for surfing. He wanted to leave those communities better than he found them, and not worse.

After dabbling with a few surf-dedicated philanthropic projects, he founded Surf For Life, an organization that is literally run out of the homes of a few surfers who live on the Great Highway. Surf For Life organizes surf trips to Latin America, and volunteers surf, but also build schools while they are there.

Since connecting with Surf For Life, Jaimal has become one of their leading spokesmen, and is spearheading a volunteer trip to El Cuco, El Salvador, a town that has great waves, but no high school.

“My ears perked up when I heard from Alex Feng, co-founder of Surf For Life, that we could build an entirely new high school for only $25,000.”


For the upcoming trip to El Salvador, Jaimal gathered a group of Ocean Beach surfers that will likely pique other peoples’ interests as well. “I wanted to bring people from Ocean Beach who appreciate the mission of Surf For Life, and who want to do good with their surfing.” Accompanying Jaimal will be surfboard shaper Danny Hess, artist Jay Nelson of Mollusk Surf Shop, teacher Andy Olive, media maven Brian Lam, and a few non-Ocean Beach residents, like professional women’s surfer Holly Beck and surf filmmaker Cyrus Sutton.

Brian Lam has already gotten Gizmodo, a tech blog he used to run, to pledge to install a state-of-the-art computer lab at the school in El Cuco after the surfers build it. Andy Olive, who not only teaches at a nursery school but also runs the clothing line San Franpsycho, has worked with designers to create shirts with proceeds benefiting the school. And best of all, Danny Hess, the internationally-respected surfboard shaper whose focus on sustainability could very well change surfboard design for good, has donated one of his custom boards to be raffled at the Park Chalet on Thursday, August 25.

Surf For Life has a massive fundraiser planned at the Park Chalet on the Great Highway, this Thursday from 7-10 pm. There will be music from Hot Pocket, which features members of Bayonics, as well as The Welcome Matt. San Franpsycho will be doing their thing: printing t-shirts and making pretty girls smile. Best of all, there’s the raffle, which could win you one of Danny’s boards. They retail for over $1,000, so if you win, you win big.. Five bucks at the door will get you happy hour prices the whole evening.

The very next night, Surf For Life is hosting a surf film movie night at the Victoria Theater in the Mission, and will showcase work from Cyrus Sutton, whose acclaimed film Stoked And Broke is a goofy but sincere look at surf travel in our own backyard, rather than renting helicopters to find waves in Indonesia.

All in all, the upcoming weekend is a prime opportunity for San Francisco surfers to get together, have a good time, support a good cause, and reconsider how they travel in order to get waves.